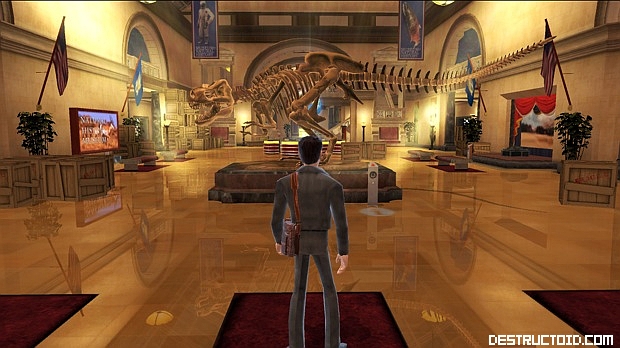 It’s about time. Today, Majesco announced Night at the Museum: Battle of the Smithsonian for the Wii, Nintendo DS, and Xbox 360. It’s a game that allows you to control Ben Stiller. Think about that for a second.

The game will launch before its subject matter, a film, releases on May 22 this year. Judging from what I know of the motion picture, the game sounds absolutely fantastic. Battle of the Smithsonian was directed the ingenious David Cronenberg. In his film, Ben Stiller plays a security guard and owner of a small cable television channel. Stiller is always looking for an edge against his competitors and quickly finds one thanks to a pirate satellite signal. The signal reveals ‘Smithsonian,’ an ultra-violent show that he instantly wants for his lineup. The problem is that he can’t nail down exactly what it is or where it comes from.

Throughout the rest of the film, Stiller is exposed to an amazing amount of ‘Smithsonian’s’ violent material and mind-controlling messages. Stiller eventually becomes a puppet for the show’s creators and does a tremendous amount of evil things for them. (Minus that whole ear-piercing thing — that was pretty hip.) At the end of the film, Stiller’s strings are severed by a dead dude and his lively daughter. Then he gets his revenge.

I’m just kidding. This game is based on a follow-up to hilarious film, Night at the Museum. Screens are in the gallery and a video is included after the break. (Long live the New Flesh!)