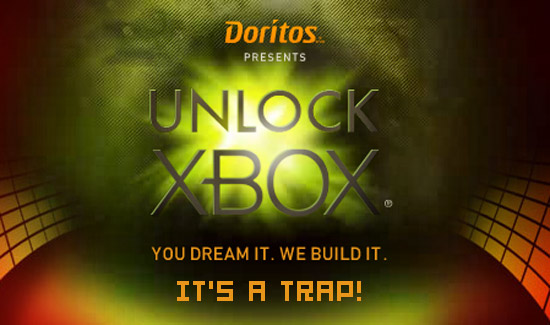 Remember back in June when I told you about a contest involving people submitting concepts for a Doritos-inspired game and that the winning entry would be released as a free Xbox Live Arcade title in 2008? Well, the 5 finalists for said contest have been chosen!

You can go ahead and try out the “betas” right here. Basically, we have from now until November 18 to vote for our favorite game a.k.a. the one that will have the least painful achievements.

Remember, just because a game is free doesn’t mean that it’s worth playing, even if it’s for only a few seconds (yes, I’m referring to Yaris).

While I’m not particularly fond of any of these advergames, I managed to play the dodgeball one the longest (about 2 minutes), so I’ll declare that one my favorite of the bunch.

What about the rest of y’all?

Today, the Doritos brand unveiled the five playable Xbox LIVE® Arcade game demos – formally known as betas, in this early stage –conceptualized by each finalist in the Doritos Unlock Xbox challenge. This first-of-its kind opportunity invited fans in the United States to think of an Xbox LIVE Arcade game idea that brings to life the bold spirit of the Doritos brand. Now through November 18, 2007, fans can play each beta game at www.snackstrongproductions.com and vote for the one they want to be developed into a full scale Xbox LIVE Arcade game for the Xbox 360™ video game and entertainment console. After voting closes, fans can continue to play each beta game online.

While much more detail and depth will come with the development of the winning concept, online beta versions give gaming fans everywhere the opportunity to get an early glimpse into the tone, look and feel of the five finalists’ visions. Consumer votes will determine the winner who will go on to have their Xbox LIVE Arcade game brought to life from the ground up by Xbox 360 and renowned video game development studio NinjaBee, a subdivision of Wahoo Studios. NinjaBee has a track record of publishing quality games for the Xbox LIVE community, including such hits as Cloning Clyde, Outpost Kaloki X and Band of Bugs.

Once released in summer 2008, fans in North America will be able to download and play the fully-developed first-ever consumer-created Xbox LIVE Arcade game for free.

“The passion and excitement our fans exuded throughout this collaborative process is just what Doritos empowerment is all about,” said Ann Mukherjee, group vice president, marketing, Frito-Lay. “We gave our finalists access to game developers to build the betas, but it was their own dedication and creativity that brought each game to life. We can’t wait for gaming fans everywhere to start playing the beta games so they can experience the fun for themselves.”

Between August 20, 2007 and October 26, 2007, the finalists worked hand in hand with a team of professional developers to transform their creative visions from paper to playable betas that embody their intended tone, appearance and experience, at this early creative phase. From the animation and music to the plot lines and characters, each beta game holds true to its creator’s bold and intense vision.

The five finalists (in alphabetical order) and their game concept if voted the winner are:

In “Doritos Dash of Destruction,” players can choose to control one of two characters. Either a hungry T-Rex chasing a delivery truck loaded with crunchy Doritos tortilla chips or the delivery truck driver, racing to escape the clutches of the T-Rex. As the chase begins havoc ensues as the lumbering dino barrels through the completely destructible city resulting in an intense game of cat-and-mouse.

In this futuristic dodgeball game, inspired by Devan’s favorite childhood game and the intensity of Doritos, players start by creating a customized team from a handful of colorful characters. Then, using special “power up” features to create fire balls, teams go at it in futuristic stadiums and compete for ultimate dodgeball dominance.

In this quick-play, high-fun, retro-style game, one or more people play as monkeys that collect Doritos chips exploding out of Mt. Doritos. The more Doritos players collect, the more points they earn and the closer they get to winning. But, watch out as fellow monkeys and lurking monsters want to steal your prized Doritos chips.

In “PB’s Quest for Flavor,” PB – the game’s pill bug hero – goes on his quest for the perfect chip flavor. Throughout the game, favorite Doritos flavors are introduced as weapons giving PB unique abilities. With the strength and power of Doritos, players guide PB through a household of obstacles and enemies to successfully complete his quest.

In this original racing game, players turn up the volume in game play as they import song files and use music to “drive” the game. Players race around the equalizer race track, where sounds, beats and rhythms will alter the track. Deep bass sounds for example might cause the race track to ripple, throwing the race cars up in the air while other elements of the music generate power-ups.

In addition to playing and voting on the beta games, between now and November 18, 2007 fans can also get in the game by visiting www.snackstrongproductions.com for a chance to instantly win great prize packages including Xbox 360 consoles, Xbox LIVE Gold subscriptions and more. Details, including rules, will be available on the site during the promotion period.