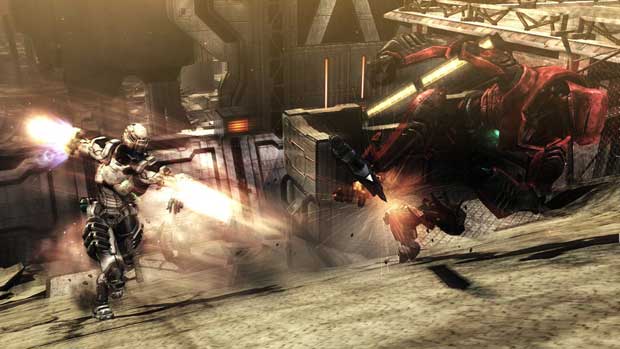 Gamers were a bit bent out of shape last year when Platinum Games’ Bayonetta wasn’t, shall we say, quite the same on both PlayStation 3 and Xbox 360. The PlayStation 3 version of the game, which was “farmed out” to another developer for a port, took a few hits in both content and visuals. That shouldn’t be a problem with Platinum’s upcoming shooter, Vanquish, says the system programmer in charge of developing the PlayStation 3 version.

“Even the developers on the Vanquish team have a hard time telling the two versions apart at a glance,” writes Hideaki Nakata. “So no matter which console you have, you have nothing to worry about!”

Says him, of course. He has heard of Eurogamer’s Digital Foundry, right? With the Vanquish demo out next week on both platforms, we’re sure those pixel-counting freaks are going to put this to the test. Me, I don’t much care about this kind of stuff. You play it on what console you play it on, and that’s fine. I had a chance to play Vanquish earlier this year (on the 360, if you must know) and it was rad. Can’t wait to check out the demo next week.

Programming the engine behind Vanquish [Platinum Games via Siliconera]