I don’t really like the phrase “winning E3.” We all win every year, right? With more competition from all corners of the industry, developers and publishers alike thrive, creating new ideas and concepts for us to enjoy. Unless you’ve become completely jaded with video games in general, it is impossible to come away from E3 without a smile on your face.

That all said, Platinum Games really rocked it this year. Just today, Activision officially announced the studio’s involvement with Transformers: Devastation, a new action game based on the Generation 1 franchise, freeing that series from the clutches of Michael Bay. Oh, and don’t forget Star Fox Zero, a brand new Wii U project in collaboration with Nintendo, and the “New NieR Project” with Square Enix.

Holy shit Platinum! Way to be! 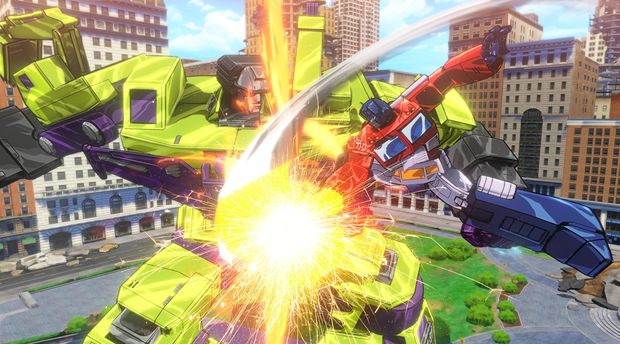 This level of success is rarely seen from underdog developers like this, but somehow, Platinum has managed to woo some of the biggest players in the entire industry. If I had to venture a guess, it would be primarily because of the fact that it creates great games, but it must be said, it’s an incredibly versatile developer in general. While it’s true that Platinum mostly sticks to the action genre, projects like Vanquish have advanced shooting mechanics deeply embedded within its gameplay systems, and Infinite Space is a fairly complex RPG.

You can see the passion from studio heads a mile away. Remember when Platinum’s Hideki Kamiya said that he wanted Nintendo to go to the studio, hold guns to their heads, and say “make a new Star Fox“? Kamiya is known for his Twitter theatrics, but you can’t say that he’s not passionate about the industry, and that sort of thing is noticed — in this case, by Nintendo directly. The entire studio was built by visionaries like him, such as Atsushi Inaba, who worked on Resident Evil and Devil May Cry, and former member (and legend) Shinji Mikami.

Platinum is having a great E3, and that’s not even including the fact that it is also signed on for an agreement with Microsoft for Scalebound, as well as any number of other projects it’s wheeling and dealing on at the moment. Platinum has come a long way since its departure from Capcom’s Clover Studio division, and I’m happy for its success — it makes freaking fantastic games.