“It basically sucked,” Activision producer Robert Conkey told me. “We don’t know what happened.” I had just finished playing a demo of Platinum’s Teenage Mutant Ninja Turtles: Mutants in Manhattan with Conkey and game designer Eiro Shirahama, and I couldn’t help but ask how the game became the industry’s worst-kept secret.

It wasn’t long before they relented, though. “The community reaction made it a lot easier to deal with,” Conkey continued. He insinuated that seeing so many people get so excited at the idea of Platinum handling the TMNT license, well, it’s pretty cool. It turned out to be a pleasant surprise. After spending 20 minutes with the game, I’d say there’s justification in that excitement.

The demo was something of a whirlwind, because Mutants in Manhattan kind of is a whirlwind. The combat (of which there is a lot) is a constant flurry of attacks, all of them leaving momentary streaks of color in the air. It’s part melee fray and part fireworks. All four turtles packed into a small area is when the game is at its most hectic and gorgeous. 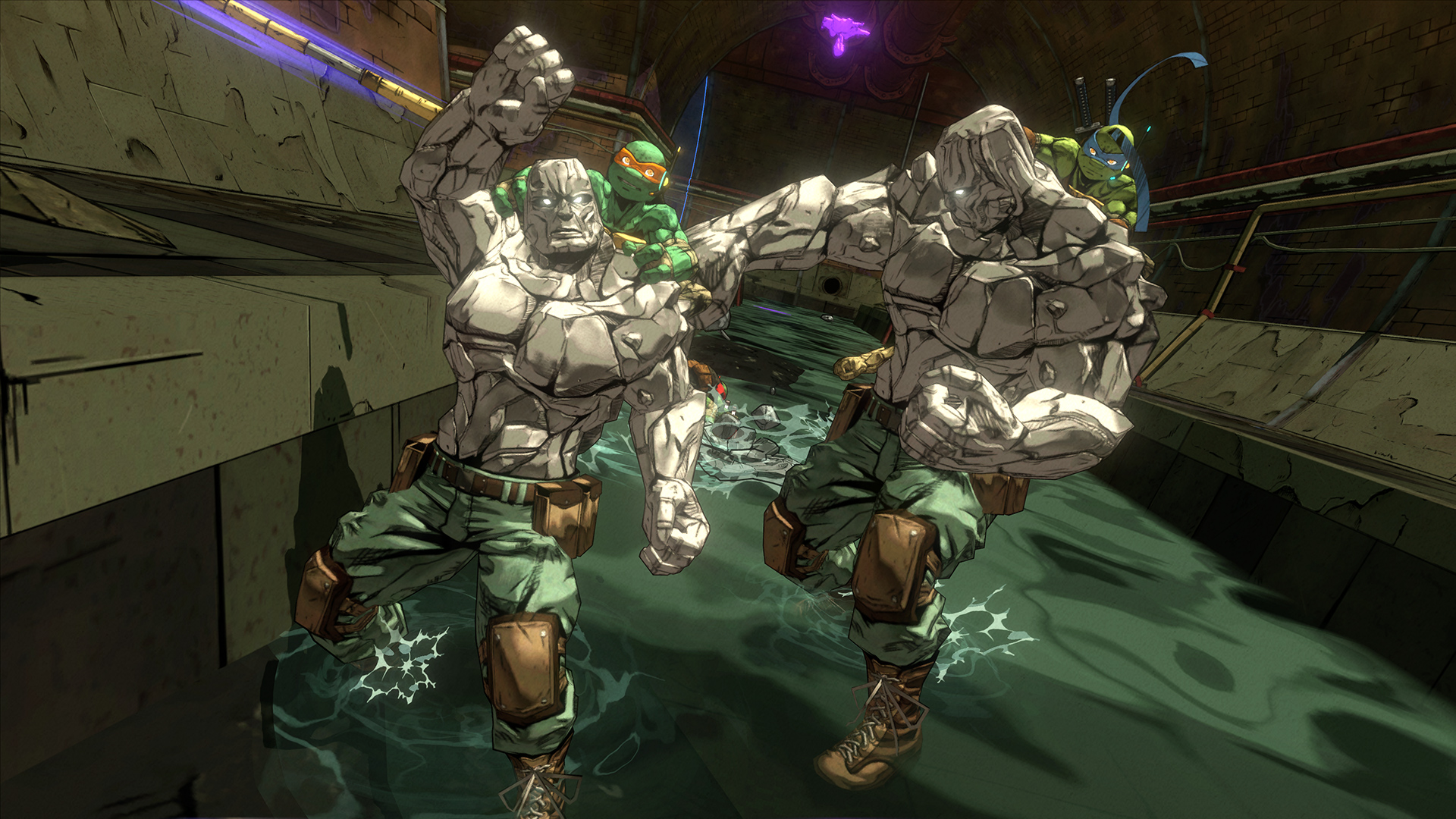 Beautiful, sure — but combat also has an appropriately punchy feel to it. The two-button system works great for executing light and heavy offense. It’s standard stuff, but it’s done well. However, where this game excels is in its special attacks. Each turtle has a wheel of unique skills, and they sometimes benefit the team as a whole. For instance, Leonardo can slow down the flow of combat. Or, Michelangelo will bust out some pom-poms to cheer on his squad, replenishing their special abilities.

Maybe most impressive is that Mutants in Manhattan is very adept at making you feel good at the game — even if you probably aren’t. Still, each battle sequence comes with a grade at the end, lest you get think too highly of yourself. My S-ranks likely had less to do with my contribution, and more due to the fact that Shirahama was playing alongside me.

When not fighting, the turtles are exploring. It seems as if each area or level will have an open-world feel to it, which allows the team to search for currency and side events. In our demo, we saw Manhattan proper as we scaled buildings and jumped between them. Rogue foot soldiers were an invitation to attack from above and quickly dispose of them, if for no other reason than simply because we could.

The exploration phases seem like they serve as a spacer of sorts. Splinter will shout the next objective after enough time passes, but not before you get a quick breather. It’s an opportune time to find a sewer (these act as shops) and buy a few upgrades. Pizza seemed like a good choice because pizza is always a good choice. 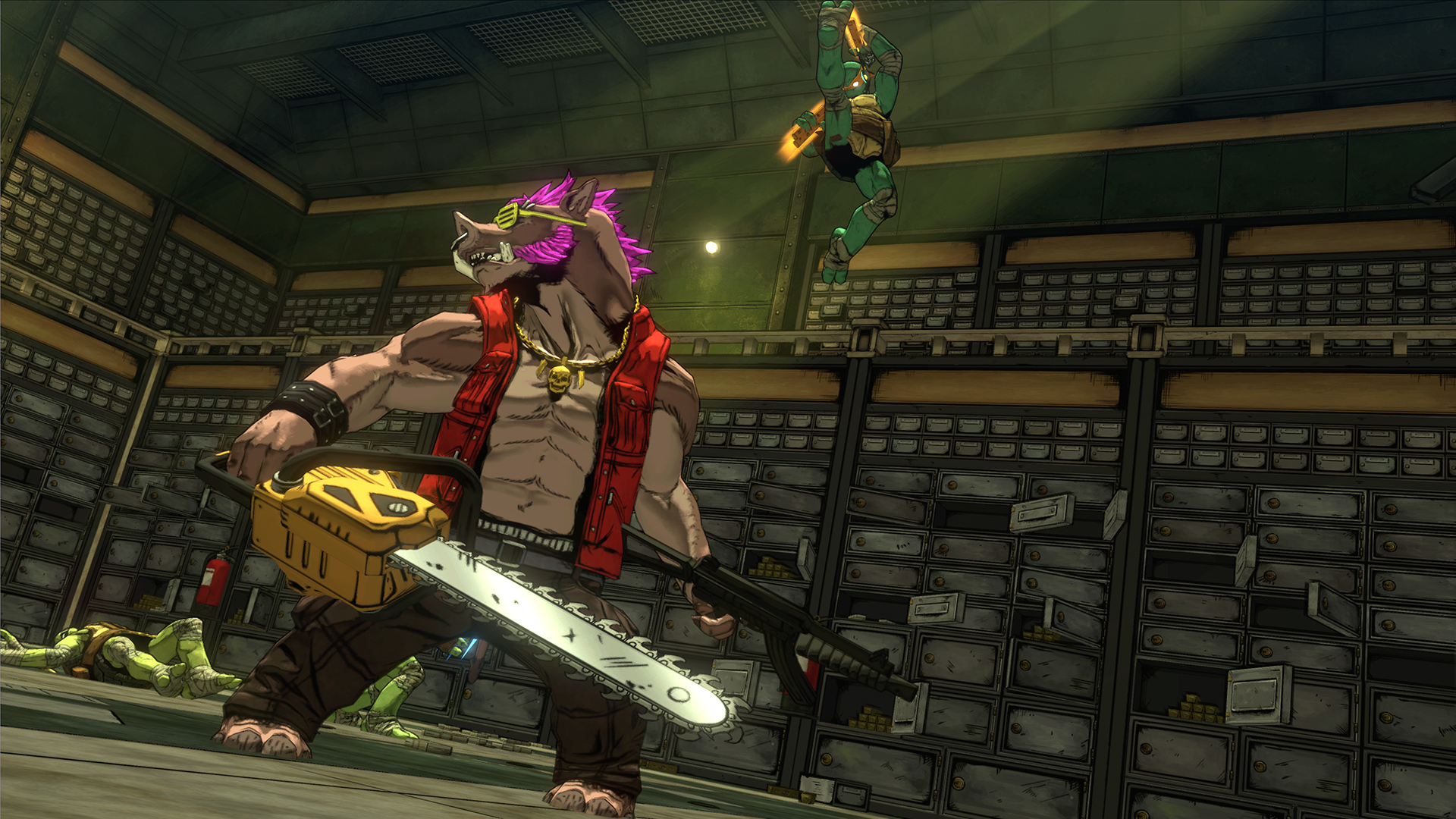 Before long, the sensei rat told us that Bebop was robbing a bank. Bebop, who was equipped with a giant chainsaw, proved to be a significant challenge. We each failed several times while whittling down the pig’s seven health bars. Failure isn’t necessarily bad, though; it drops the turtle into a sewer in front of a pile of pizza. You try to revive yourself by eating enough pizza very quickly. But, not too quickly! That will burn the roof of your mouth, causing a slight delay. If all four turtles are in the pizza room at the same time, the run is wiped, necessitating a do-over.

Eventually, we bested Bebop (again, all credit goes to Shirahama, probably), even getting through his aggressive state when he was near death. Presumably, we would’ve then been off to another location — maybe the sewers or another part of the city or Dimension X. Instead, our appointment ended. Unfortunate really, because I would’ve gladly played that game much longer, and I don’t leave a whole lot of demos with that feeling.

It’s worth noting one possible source of frustration: Mutants in Manhattan won’t have any options for local cooperative play. Online is the sole direction that Platinum is going with multiplayer. Conkey emphasized that the studio didn’t want to compromise a constant 60 frames per second. Rendering that up to four times on the same screen won’t allow the developers to hit that target.

That aside, Teenage Mutant Ninja Turtles: Mutants in Manhattan made a fantastic first impression. It has that trademark Platinum feel about it, all while smartly handling a beloved franchise. Turtle power, indeed.