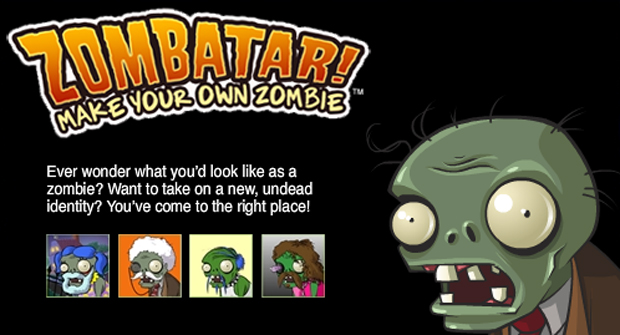 The new trailer for Plants vs Zombies, which you can see after the jump, confirmed for me that this game is going to rank as one of my most wanted summer titles — it just looks too funny. It was also brought to my attention that PopCap has added a zombie avatar generator to their Web site for the game, called a Zombatar, so you can make an icon for your personal use.

There’s also some buzz going around thanks to an interview with Casual Gaming.biz (via Joystiq) that Plants vs. Zombies could come to iPhones and consoles in the future. Quote follows:

“We at PopCap are of the opinion that that everyone is a potential player of casual games,” a spokesperson explained. “We make games that appeal to everyone and anyone – commuters, office workers, families – as well as hardcore gamers.

“To reach these diverse audiences, our overriding mission at PopCap has to be to have our games in as many different places, and on as many platforms, as possible – to make them accessible to this audience of ‘everyone’.

If I had this game on my iPhone, I have to say the large amount of time I spend waiting in airports to get on planes would be dramatically less boring. Here’s to hoping we get a chance to enjoy it that way later down the line. Would you enjoy having a title like Plants vs. Zombies in portable form? You never know, your opinion could be worth something here — PopCap may be listening…