You know, there really aren’t that many fun golf games. The Tiger Woods series is great and all, but I have no interest in playing simulation based sport games. If I have to play a sports game, then it will be arcade based ones.

Zen Studios is working on just the sort of sports games I’m into with Planet MiniGolf, exclusively for the PlayStation Network. The mini-golf game is full of features and best of all, it’s going to go for just $10 when it’s released this Spring.

Read on after the break for more on Planet MiniGolf.

Planet MiniGolf will offer four distinct settings with four levels in each and every level contains nine holes for a total of 144 courses. Multiplayer will see up to six-players either golfing in free-for-all modes or working in the two different team modes. One team mode will see each person using their own ball while the other team mode will see a team sharing one ball that they each have to take turns hitting.

The four different environments are based on major cities from around the world and each have a wacky theme to them. There’s the arctic UFO setting, the Mayan jungle setting, the tropical island pirate hideout setting and the London nighttime setting. The same ball physics from the Zen pinball franchise is utilized in Planet MiniGolf and the different terrains will affect how the ball moves. For example, playing on the arctic maps will see the ball sliding all over the course due to the snow and ice.

Players will also be able to create their own custom courses. You can create whatever crazy design you want and all of the objects from the main game are at your disposal. There is a limit to how extensive the course can be, but you should be able to create some pretty neat things before you hit the limit. Your custom courses can also be shared online and rated by other players. 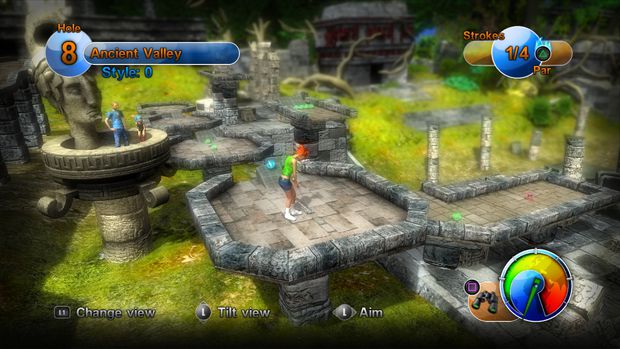 The courses are as crazy as you would expect a videogame based on mini-golf would be with plenty of obstacles players will have to steer clear of in order to sink their balls into holes. You’ll be able to take a look at the entire course before taking a swing, either via the right analog stick or with the six-axis motion controls. Six-axis will also be used for one of eight Mario Kart-style power-ups scattered throughout courses. The six-axis based power-up let’s you steer the ball for a limited time via the motion controls. Other items include speed boosts, a heavier ball and a magnet that pulls golf ball into golf holes.

On top of all this content, you’ll have six customizable characters to play as, leaderboards, the ability to upload your replays to YouTube and a badge reward system. Visually, the game was looking pretty good. The environments are small, but they’re filled with a lot of detail and eye candy. Controls were also pretty good and pretty straightforward.

Simply put, Planet MiniGolf is going to be well worth the ten dollars.