His name is Scrumptious

I’ve been a big fan of The Behemoth ever since I first played Castle Crashers. I was familiar with their Newgrounds content, but never really took the plunge until the genre defining beat-’em-up landed on Xbox Live Arcade in 2008. It was almost revelatory in how good that game was, along with having a plain colorful and hilarious art style. I immediately became a fan and eagerly waited for their next release.

BattleBlock Theater took quite awhile to hit the 360, but I eventually ended up grabbing it and loving that game, as well. The Behemoth has such wild creativity and reckless disregard for established conventions that it seems like everything they craft is gold. Pit People looked to be more of the same, at least from an aesthetic standpoint.

When I gave the game a shot at RTX this weekend (somehow missing it at PAX this past March), I can’t say I walked away from the single-player portion all too excited. The multiplayer, though, is a totally different beast and definitely has the hallmarks of another instant classic. 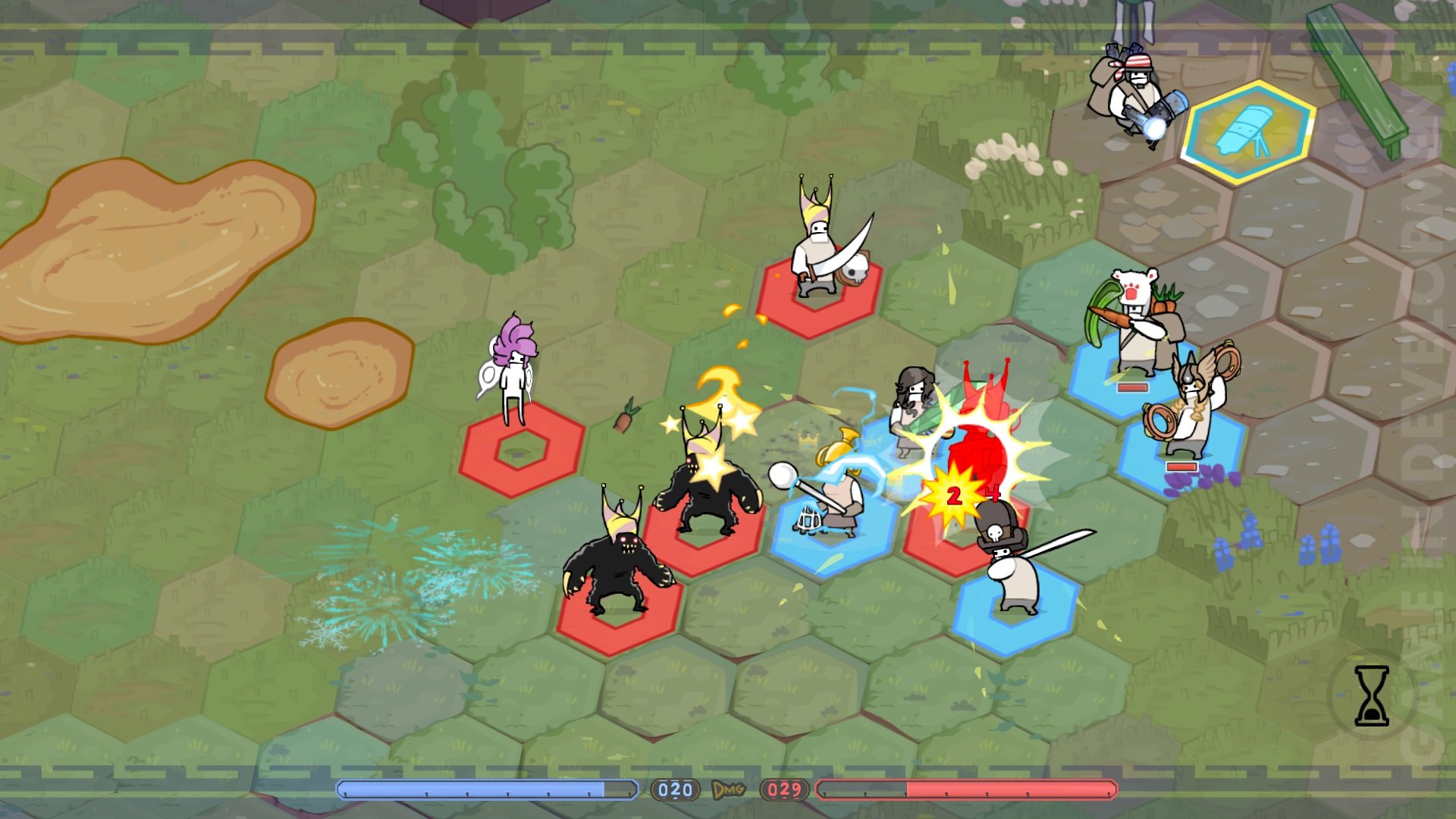 While previous Behemoth games have dealt with action-oriented games, Pit People shifts genres entirely to become an SRPG. This is a game very much in the vein of Fire Emblem or Advance Wars, just without the severe punishments of permadeath or the overwhelming tactical depth of commander powers. Pit People is sort of a more complicated game of rock-paper-scissors that features a healer who is a cupcake.

The wonderful lunacy of the artists at The Behemoth shines through with these character designs, even if some are repeated from past efforts. Their specific brand of simplified facial design and potty humor is all present and accounted for, as well as the vocal styling of Will Stamper (voice of Hatty Hattington in BattleBlock Theater) making a return as an overly pissed off announcer.

There is also some incredible music to keep you occupied as you deliberate your movements. Seeing as how the game is an SRPG, you’ll plan out your characters’ movements to then be enacted upon hitting go. You move pieces around a grid like a tabletop RPG and the game does behind-the-scenes calculations to determine who is attacking what, on what grid, and for how much.

I suppose it isn’t the most in-depth system around, or even the most logical, but it helps to balance out the various types of units you’ll take control of. I didn’t get an exact understanding of the different strengths and weaknesses, bu things like helmet-clad characters will have higher defense against blunt weapons and ranged fighters will be exceptionally weak to up-close confrontation. 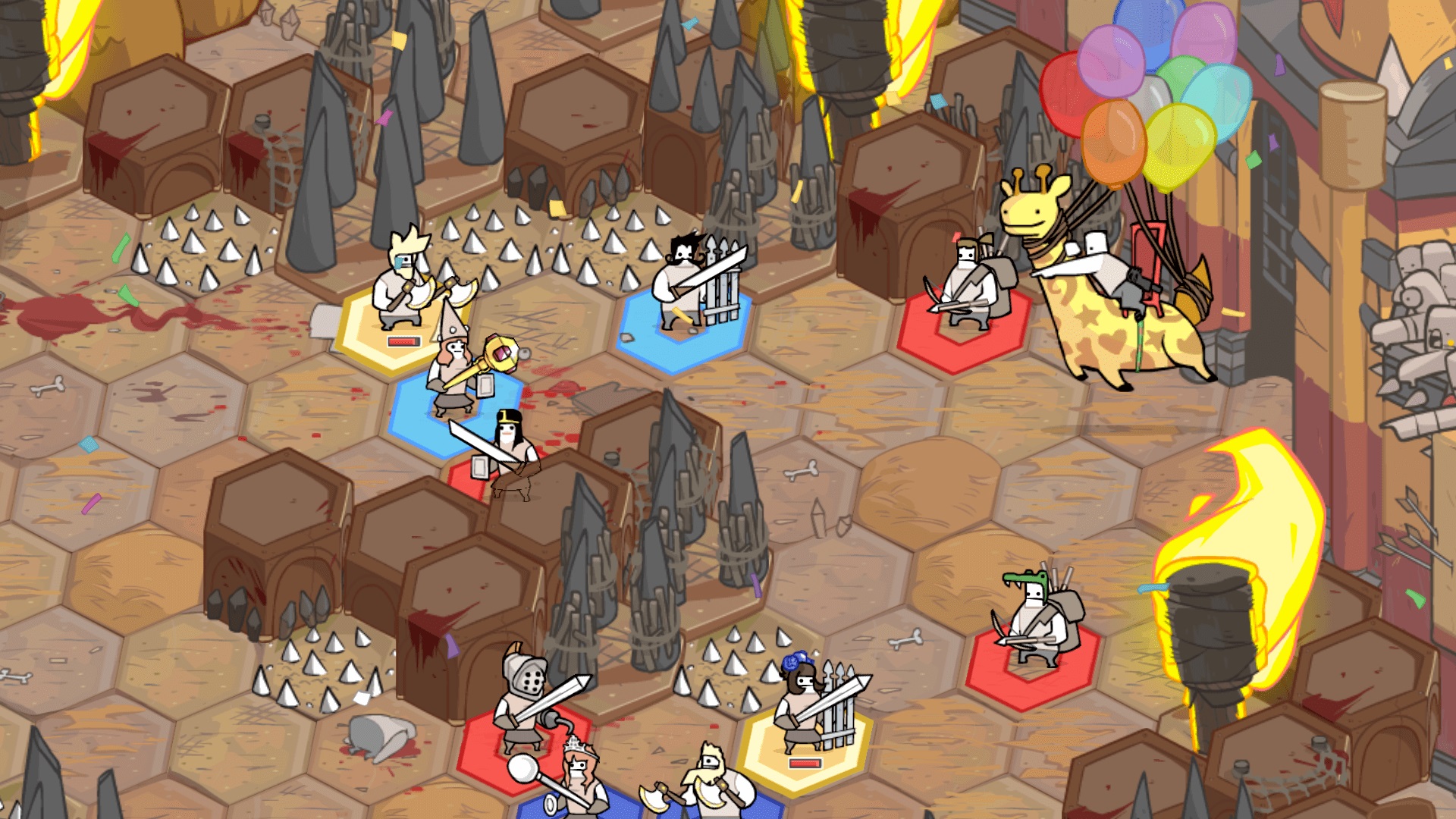 The battlefields, themselves, can also feature obstacles that can hinder or help you, based on the positioning of your characters. You might need to flee from an opponent’s oncoming juggernaut, for instance, but the shortest path is through a spike trap. Do you risk the small bit of damage to escape, or shift around to try and get behind your enemy or even run to the aid of your healer? It can become very complex against a human opponent, which is where I feel the game truly shines.

The campaign is fun, don’t get me wrong, but it mostly works for its sense of humor. Like I mentioned earlier, your healer is a cupcake and one of the side-quests I encountered had me saving his cupcake friend. The enemy leader was the birthday boy and he had stolen my cupcake’s friend as a gift to himself. I had to advance onto him through his army to prevent him from eating the other cupcake. What the hell did I just write?

Still, from the short demo I played, the computer AI doesn’t seem all too bright. I’m also not sure, exactly, how the overworld map works. You can freely move around and even avoid battles, but since the game features traditional RPG leveling, you’d want to engage in those skirmishes. The pacing, through, can slow to a crawl as you meticulously try and plot out where you’re moving, what quests you’re trying to complete, and how you can get around foes on the overworld screen.

In multiplayer, though, you just get straight into the battle and need to put on your thinking cap against a person just as intelligent as you. Even though I had only put in roughly 30 minutes of game time, I had an epicly close battle with someone due to our basic understanding of the rock-paper-scissors style combat. 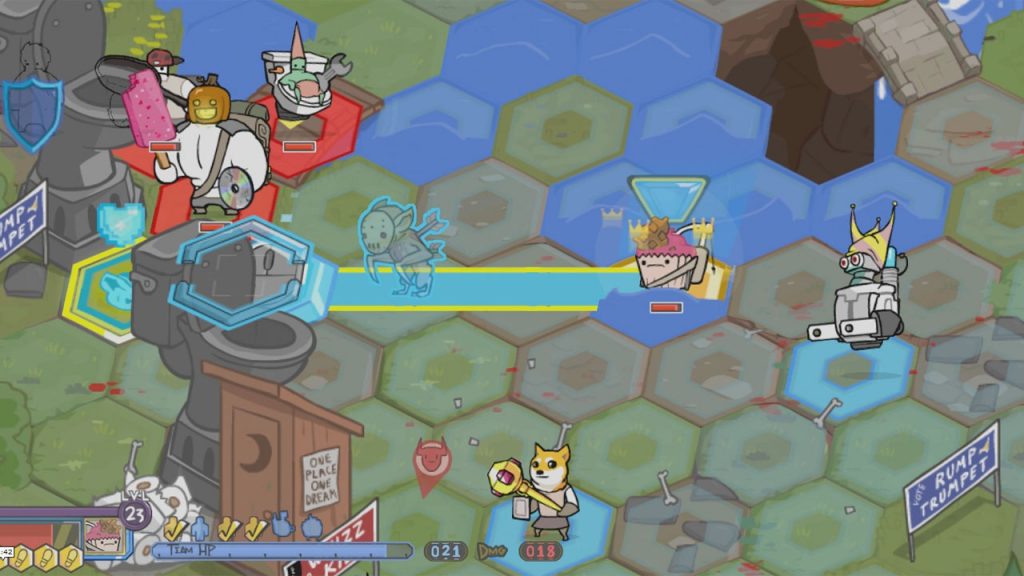 It was a wild time trying to chase down his heavy, grunt-spewing unit while I was avoiding spike traps and moving my archer out of harm’s way. The turn-based nature of the game never even became a factor because I got to engage with the player either via smack talk or even suggestions on moves. It was great to have that element of discussion going while waiting for my turn to commence.

You just don’t get that from the single-player, though I’m guessing that may be due to me starting in a tutorial. Even so, I’m perfectly fine with Pit People being yet another Behemoth game that excels at its multiplayer element, because even Castle Crashers and BattleBlock Theater were much more enjoyable with buddies.

So while the fact that Pit People isn’t an action-based game might scare you, don’t be worried. The Behemoth’s peculiar style of game making still shines through in every facet of this new title. In a lot of ways, this is the best multiplayer experience they’ve crafted thus far. I’m eager to see if the rest of the game can hold up.