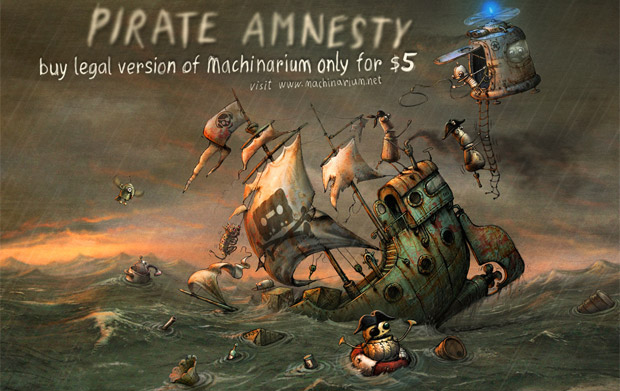 So, it seems there are way more pirates playing Machinarium than there are legit players. According to Amanita Design, we’re looking at 5 to 15 percent — that’s how many paid for the game. As with many independent games, Machinarium is free of DRM, making piracy a painless process.

That’s not what this story is about, though; sadly, those estimates aren’t exactly unusual. No, the news here is how Amanita Design is offering pirates a chance at redemption. From now through August 12, Machinarium (Windows/Mac/Linux + soundtrack) is down to $5.

Normally, this excellent adventure title would run you $20. Even if you already own it, or don’t particularly care for the genre, you need to go here for Tomas Dvorak’s chill “Pirate Amnesty” tune, which was created for this special occasion.