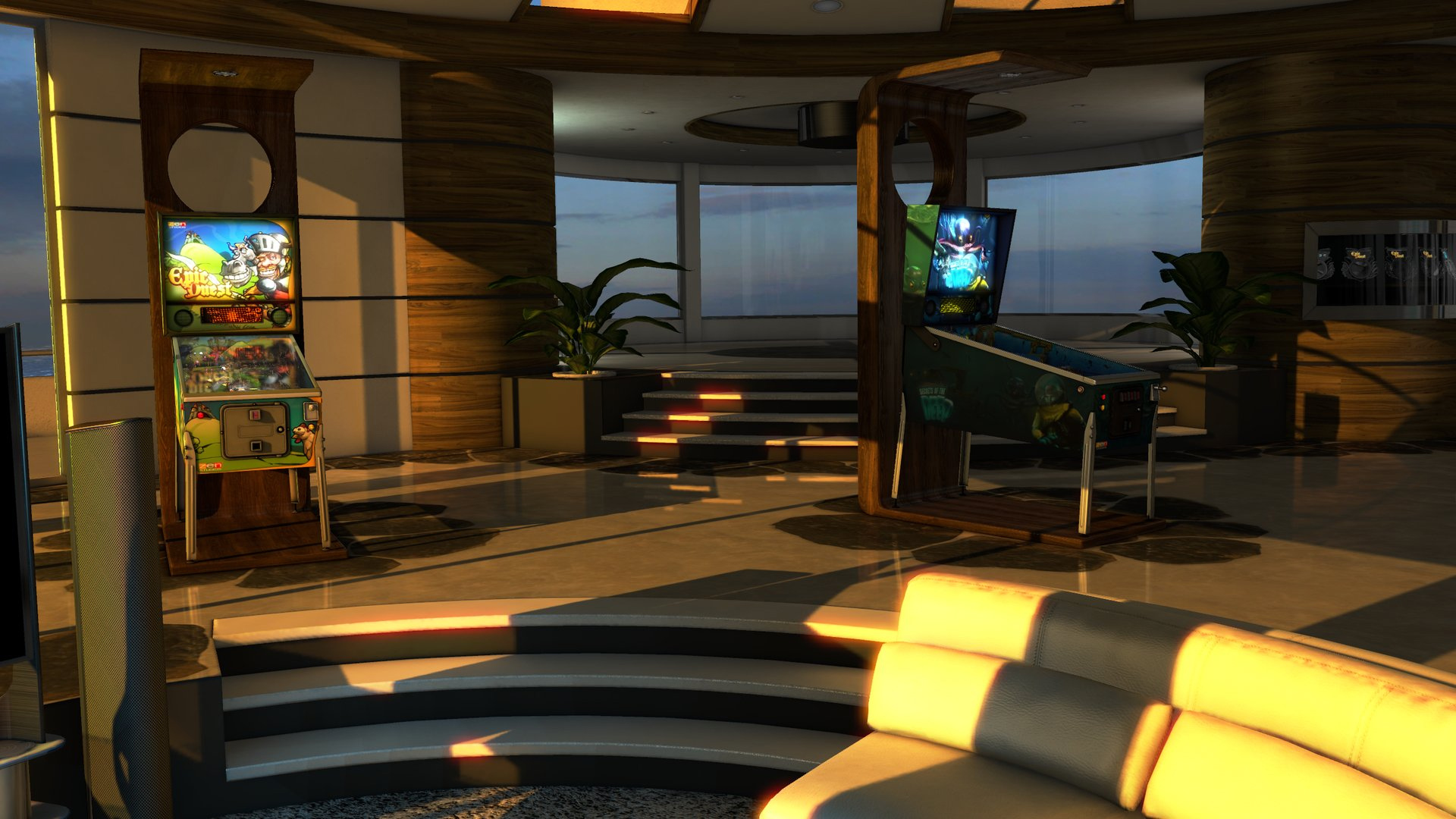 It feels like it’s been years since I’ve last played a Zen Studios pinball game. I mean, my goodness! The list of tables available for Pinball FX2 stretches on and on. Where do you even start at this point?

For as much fun as I’ve had with that game and Zen’s earlier work, I’m no pinball wizard. Those feelings of leaderboard inadequacy had me hesitant to try my hand at Pinball FX2 VR, which is out this week for PlayStation VR and HTC Vive following the Oculus Rift version that launched back in March. In the end, though, I’m glad I went for it. Pinball translates really well to virtual reality.

To be perfectly up front, there isn’t a whole lot to mention that you wouldn’t already expect from Pinball FX2 VR. The game is set in a fancy, heavily-windowed home with a few pre-set pinball table locations, and as you buy more, you can swap your favorite tables in or out at will.

You aren’t walking around the house — navigation is sight-based, and confirmed with a button press — but as you play each table, the scene around you will come alive with relevant visual flourishes. In the Secrets of the Deep table, for instance, your swanky home looks like it’s underwater, with jellyfish floating off to the side of the table and a well-rendered shark swimming circles around you.

While playing the Walking Dead table, zombies eerily peer at you from outside the windows, and one of them is right within arm’s reach. Some of these effects are more convincing (and distracting) than others. In the case of the up-close zombie, I couldn’t help but lean forward and stare every time I lost a ball. He made me desperate for Telltale to brings its Walking Dead adventure series over to VR. 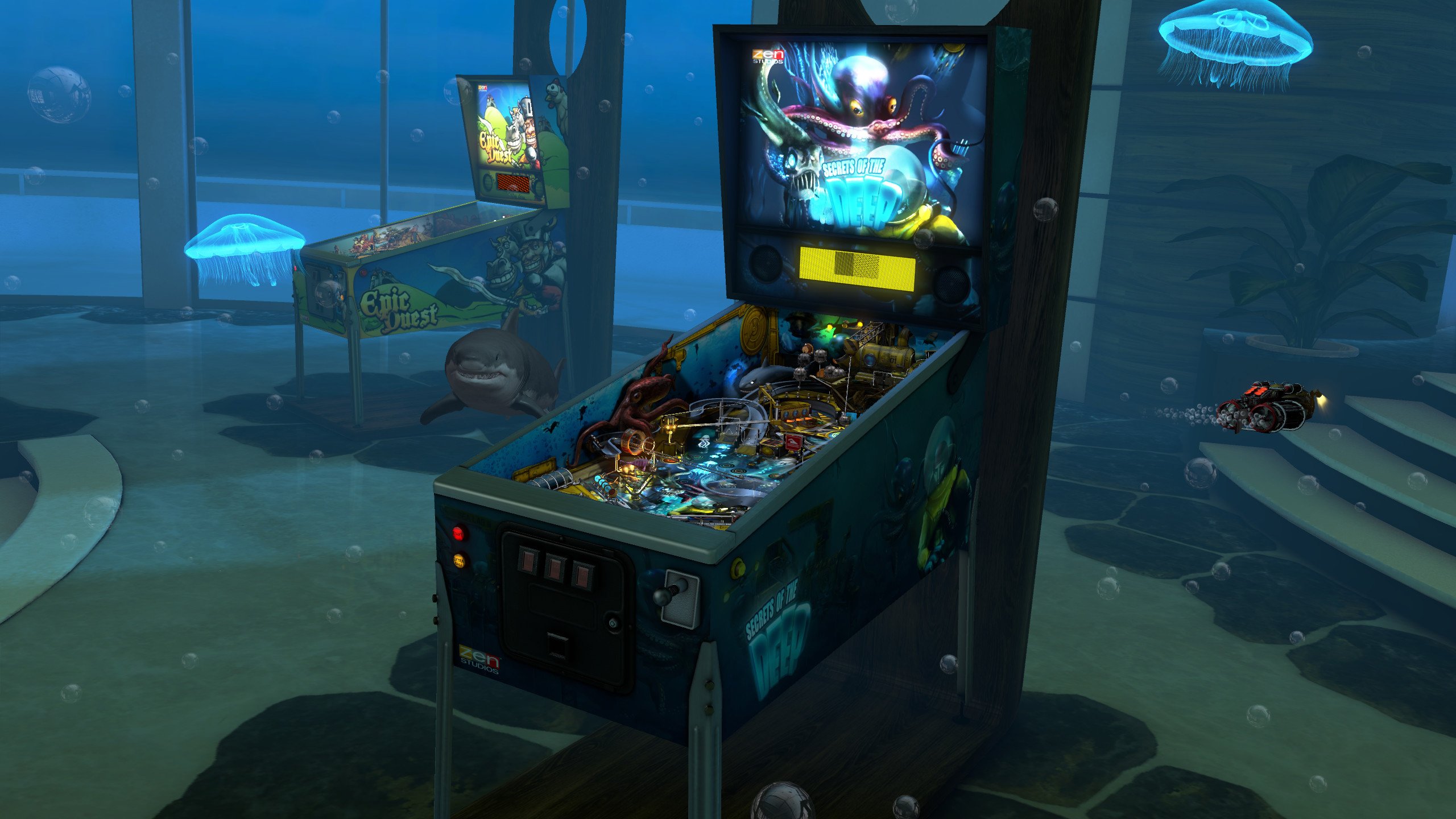 As for the tables themselves, the base Pinball FX2 VR package (pictured above) only comes with three, and the rest are sold as DLC. While Zen’s pinball tables can bend the rules of the real world or otherwise seem implausible due to their “video game”-style objectives and complex moving parts, that never really bothered me before, and it feels like even less of an issue while playing in virtual reality.

You play from an overhead view, looking down on the table just as you would in real life. Put another way, in order to see the bottom-most flippers, your default position in real life is going to be one where your head is tilted at least slightly downward, and you’ll need to peer up in order to see the scoring screen at the top of the machine. That might sound irksome, but it’s necessary for the game to achieve immersion and sell your brain on the idea that you’re playing pinball for real.

As a result of all this, I much prefer to play sitting down (for this and any VR game that allows it), just for comfort’s sake. Pinball FX2 VR can and will cause neck strain if you let it, but by messing around with the “recenter view” button, I was able to get it to where I could see the vital lower half of the pinball table at a more natural “resting” position. That’s worth figuring out up front.

The main thing going against Pinball FX2 VR is a criticism typical of VR: the pricing.

At $14.99, the base game has three tables: Secrets of the Deep, Mars, and Epic Quest. Then there’s the Season 1 Pack, which comes in at $24.99, and includes five tables: CastleStorm, Wild West Rampage, BioLab, Paranormal, and Earth Defense. Finally, Zen is selling the Walking Dead table as its own DLC, priced at $5.99. You’ll need the base game in order to play this additional content.

On top of that, there isn’t a loyalty discount for returning players. So if you’ve purchased any of these Pinball FX2 tables on other platforms, you’ll still have to pay full price like everyone else. I understand that new work went into getting these existing experiences right for VR, but even a little discount could have gone a long way. Similarly, piecemeal pricing would’ve been appreciated.

I wasn’t able to test out the Vive port of Pinball FX2 VR or the first-to-market Oculus Rift version, but according to Zen, the game is “functionally identical across VR platforms.”

Assuming the PlayStation VR version is on the lower-end as far as visual fidelity is concerned, I still think it looks sufficiently good. If you’re into pinball (or at least this team’s digital interpretation of it), I’d give this a go, but you may want to wait for additional tables to come out first. It certainly fills a nice, calming niche in my VR library as a title that doesn’t overwhelm the senses.

Just don’t forget to give your neck a break. Learn from my mistakes!