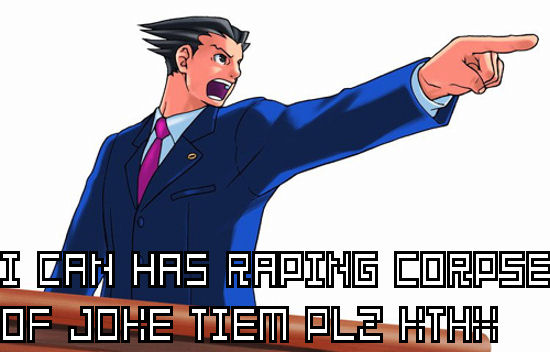 Look, I found the first ten thousand Lolcat images as funny as everybody else did, but there comes a time to draw a line, and I think Capcom has proven it. The Internet meme has already been assimilated into the Halo 3 hype machine, but Capcom feels that its Phoenix Wright series can exploit the overdone (and these days, quite uninspired) feline images for its own ends.

To this end, Capcom is running a contest in which all you have to do is place a Lolcat-style piece of text on a Phoenix Wright image. The funniest ones will receive prizes consisting of signed posters, plush toys and free copies of Phoenix Wright: Ace Attorney Trials & Tribulations. Why, it’s so easy even my Dad could do it, and he’s missing, presumed dead!

Capcom is also running a “What *Really* Happened to Harvey?” contest which tasks entrants with the job of creating a Harvey Birdman comic strip using handy templates. If you want Harvey Birdman bobbleheads, wall tins (whatever those are) and DVDs of Harvey Birdman: Attorney at Law, you might be interested.

Back to the main story — can we just agree that the whole Lolcat craze peaked with “Let me show you my Pokemans” and come to terms with the fact that it’s been downhill from there?