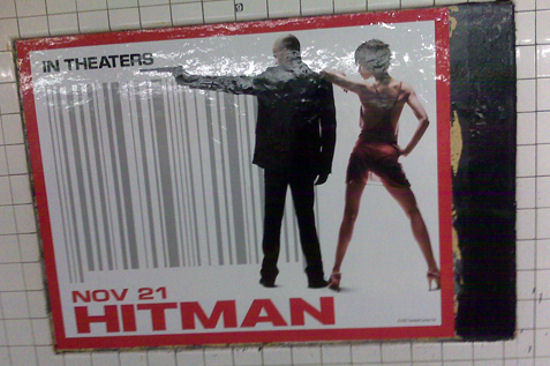 Considering Philadelphia is filled with violence and some of the worst kind of professional wrestling fans, it amuses me to think they’re so upset over a poster that has a gun on it. Under the guise of bemoaning the shooting of cop Chuck Cassidy, this hilarious report from the Philadelphia Daily News celebrates the removal of Hitman movie posters from its city.

“… Ads glorifying gun violence to sell movies can be particularly sickening. So we’re glad to report that some in City Hall are taking it personally and saying, “Enough is enough,” claims the story’s writer, doing his/her best to sound like a 1950’s housewife. “Billboards and SEPTA bus ads for the movie “Hitman” went up a few weeks ago. They show a man pointing a gun, with a nearly naked woman draped over him.”

I love the reactionary way this piece is written. Oh NO, not GUNS and NEARLY NAKED WOMEN. The woman is in a dress, by the way — maybe she needs to wear a yashmak for these sexually repressed writers? Kotaku got a shot of the poster itself, which is visible above. I’ve seen worse.

While I fully appreciate that a cop got shot recently, being overly sensitive and crying every time you see a gun isn’t going to help matters. I seem to recall that the very cops complaining about a picture of a gun carry real ones with themselves all the time. Maybe if the poster said “shooting Philly cops with guns is brilliant, everyone do it,” they’d have cause for bitching. At any rate, do read that Philly news story — as a celebration of censorship and an example of blatant over-reaction, you  won’t find a more sadly funny article this morning.