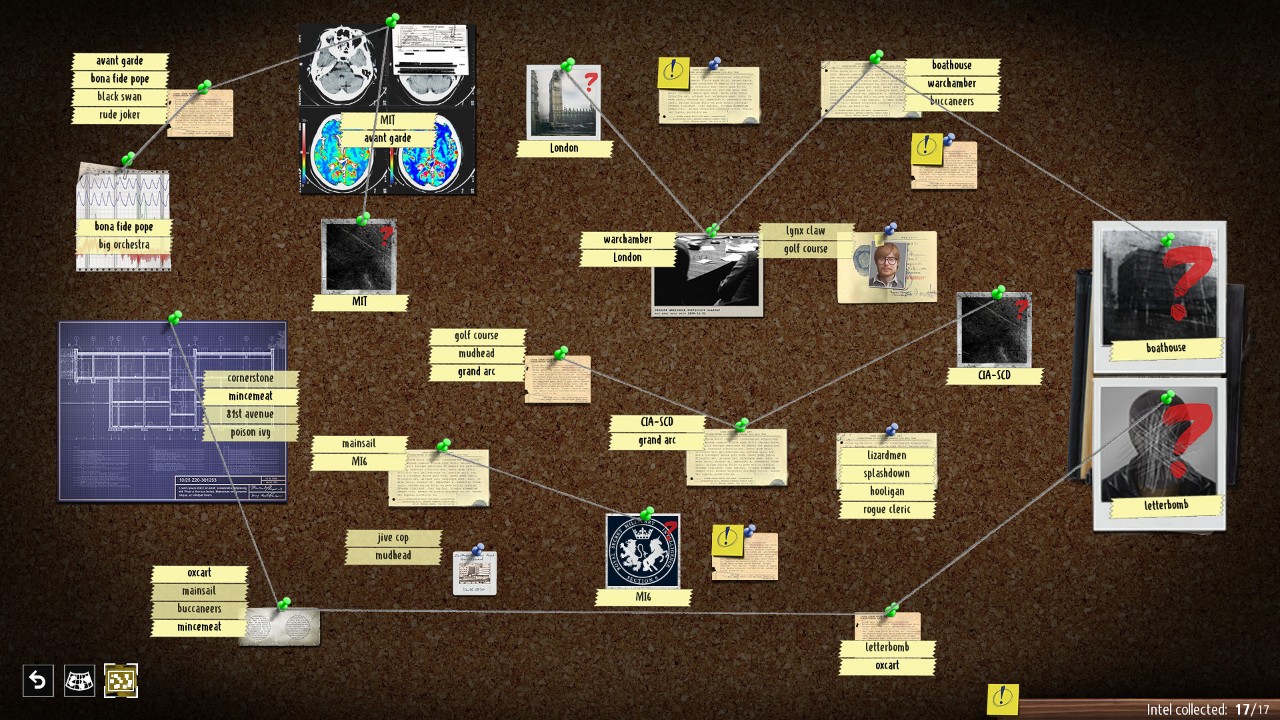 Things are not what they seem

“We weren’t really satisfied with Hard West‘s depth; it always felt rushed. So this time around, we were constantly afraid of making a game that felt too shallow. Sometimes, I think we overdid it.”

Kacper Szymczak finishes his statement with a rueful laugh. He’s just spent the last thirty minutes showing me how deep Phantom Doctrine‘s conspiracy-laden systems go. They’re anything but shallow, a tangled web of menus, mission objectives, and spy fiction that are so engrossing I’m struggling to keep up. Szymczak and the rest of CreativeForge Games are a few months away from releasing a game that’s equal parts hardcore tactical turn-based strategy and conspiracy-driven thriller. It’s a lot to take in, and whenever it seems like I’ve seen everything Phantom Doctrine has to offer, another mechanic gets thrown into the mix.

Conspiracy theories have that effect on you — just when you think you’ve made the final connection, another element muddies it all up.

It’s damn near impossible to sum up everything featured in Phantom Doctrine. My thirty-minute demo covered a wealth of information as the game’s lead designer, Szymczak, was able to cover a range of topics over the course of our meeting. There’s plenty to be excited for — especially if you’re a conspiracy nut — and I’ll do my best to highlight some of Phantom Doctrine‘s most intriguing elements, but for a more nuanced breakdown of how its different pieces fit together, Brett’s preview from last December is an excellent starting point. 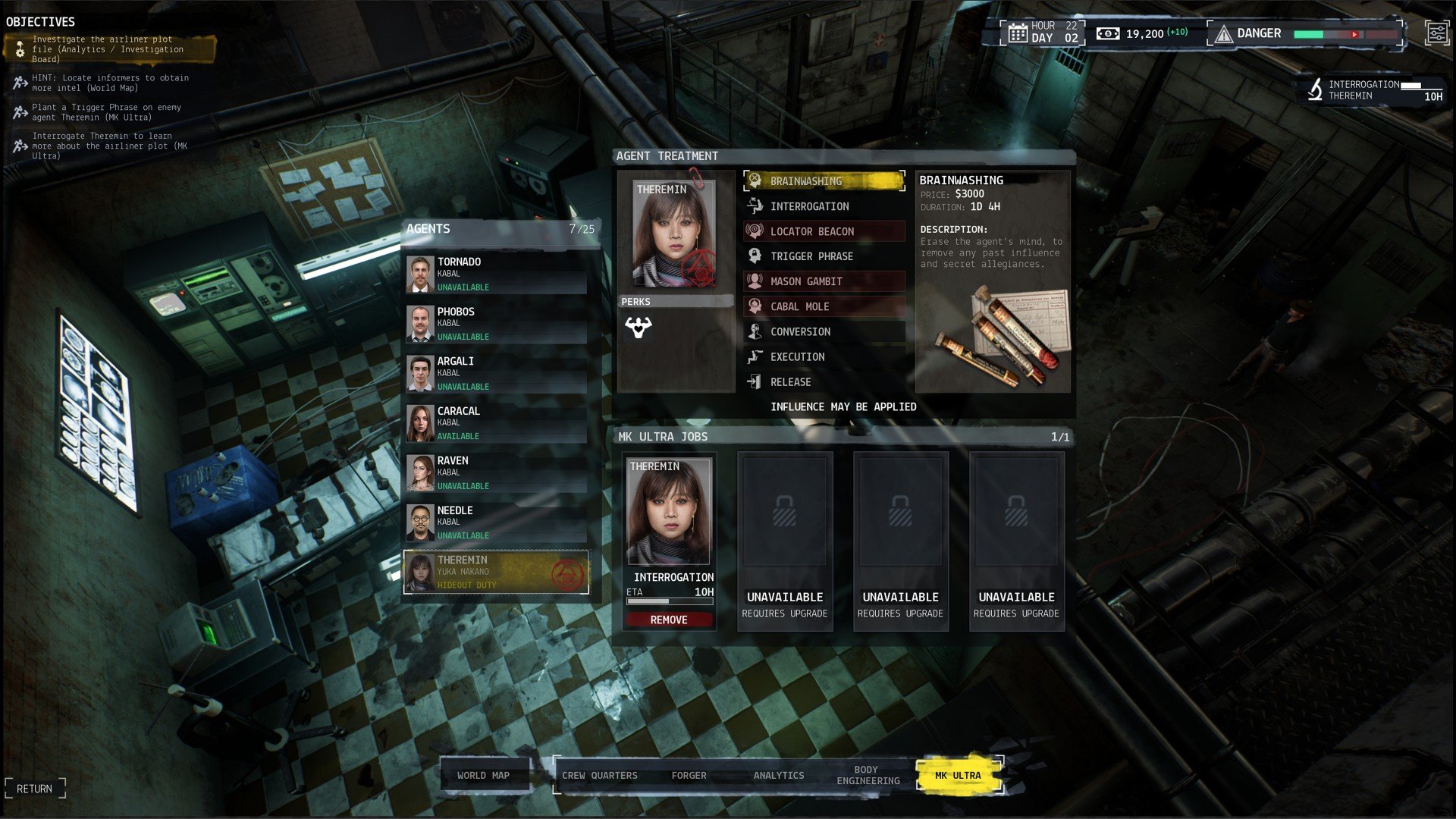 Despite being a tactical, turn-based strategy game about global conspiracies and rogue intelligence agencies, CreativeForge Games has taken steps to ground Phantom Doctrine in reality. Every recruit you encounter specializes in different languages, ranging from English to Urdu.

Languages function as more than a small flourish to sell the game’s world-spanning espionage. Szymczak says that sending agents on missions in countries where they speak the native language allows players to distract guards and tease additional information out of characters.

Additionally, although players can customize their agents as much as they’d like, Phantom Doctrine‘s randomly-generated names are based on period-authentic data. A Nicaraguan character, for example, will have a default name pulled from 1983 census data. The same goes for any and every country. 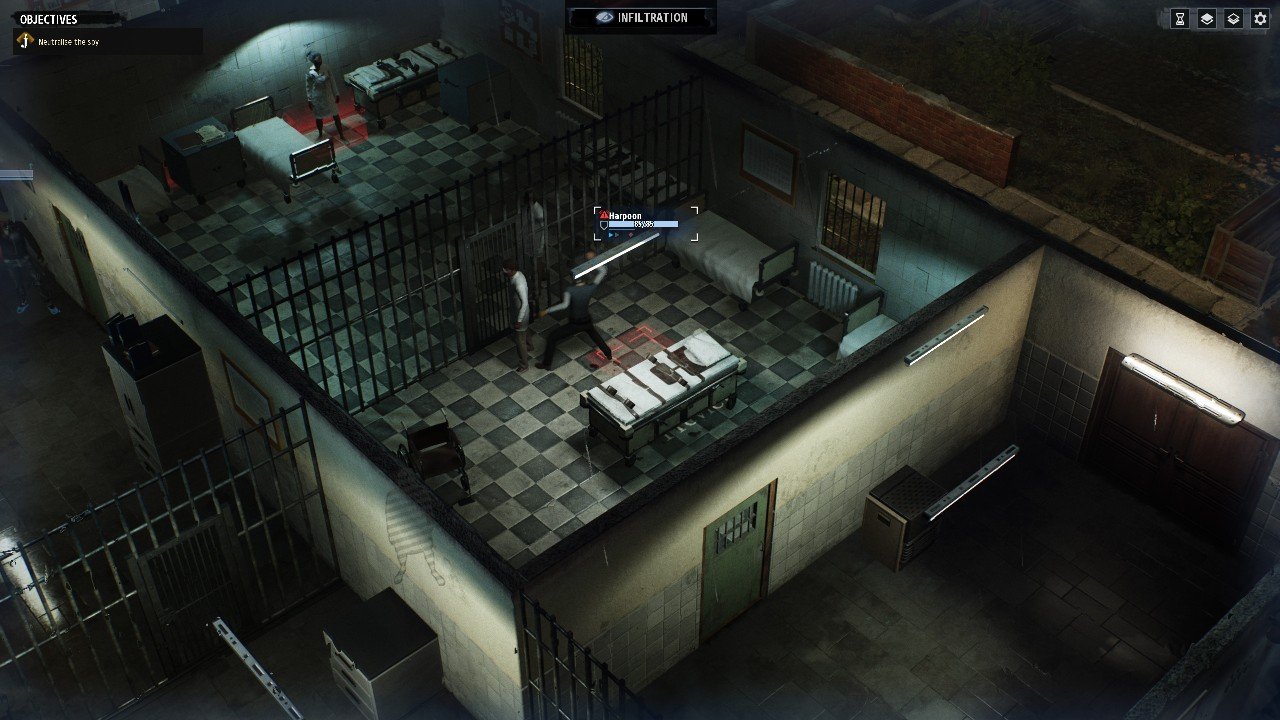 There are no character classes:

“We wanted to avoid the slow-building effect of failure,” Szymczak told me while detailing the ways players can build their team of agents. “So every single agent can use all of your equipment at any time.”

Szymczak elaborated, explaining that even a lowly rookie recruit can equip end-game gear. International espionage requires a specific skillset, but in the interest of ensuring that players never feel like they’ve screwed themselves over by losing a powerful character, Phantom Doctrine forgoes a formal class system.

This isn’t to say agents will all feel identical to one another. Every time a team member levels up, players can choose a new perk. According to Szymczak, there are tons of perks available, but the game picks a few at random each time a character earns a new level to ensure a diverse roster of spies. 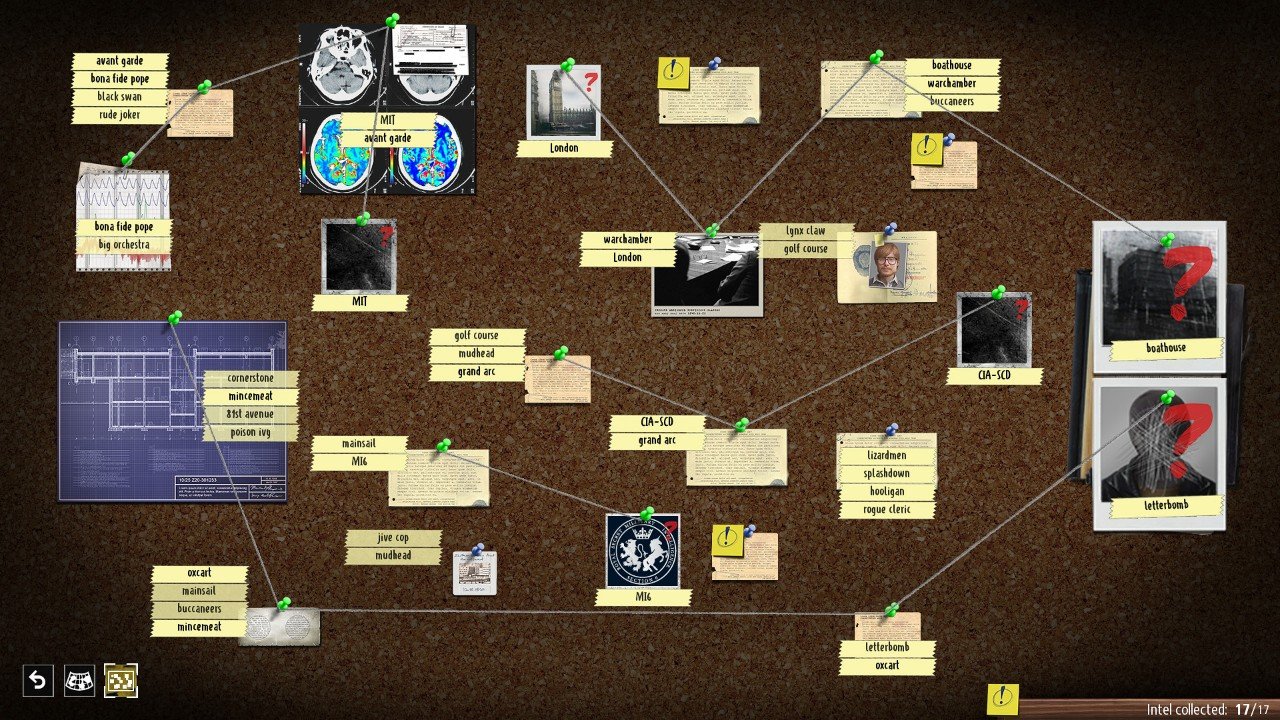 The Investigation Board is a conspiracy theorist’s dream come true:

Phantom Doctrine‘s Investigation Board was the standout feature in a demo packed with great stuff. Your shadowy rivals deal in codenames and opaque directives. In order to uncover classified information and learn the identities of enemy agents, players will have to wade through redacted files and sensitive documents in hopes of finding much-needed clues.

The investigation system takes place on a digital cork board. Players can lay files, dossiers, and memos out across the board, and scan them for cryptic messages. Each document has weird strings of text with phrases like “I don’t know how letterbomb convinced the board.” When viewing the notes, you can highlight words — like letterbomb in this case — as a potential lead. From there, it’s up to players to triangulate the truth from a collection of seemingly random files.

And, true to conspiracy form, any connections between documents are highlighted by a connective piece of red string. It’s a wonderfully messy way of selling the game’s fiction. After a few minutes messing with the Investigation Board, I felt myself obsessing over every small detail, convinced I was mere seconds away from blowing an international conspiracy wide open.

“One of the things I like about [the Investigation Board] is that you can try and neatly arrange everything,” Szymczak told me, “but no one ever fucking does that!” A good conspiracy theorist — even abstracted through the lens of a video game — knows that a clean paper trail isn’t worth the hassle. 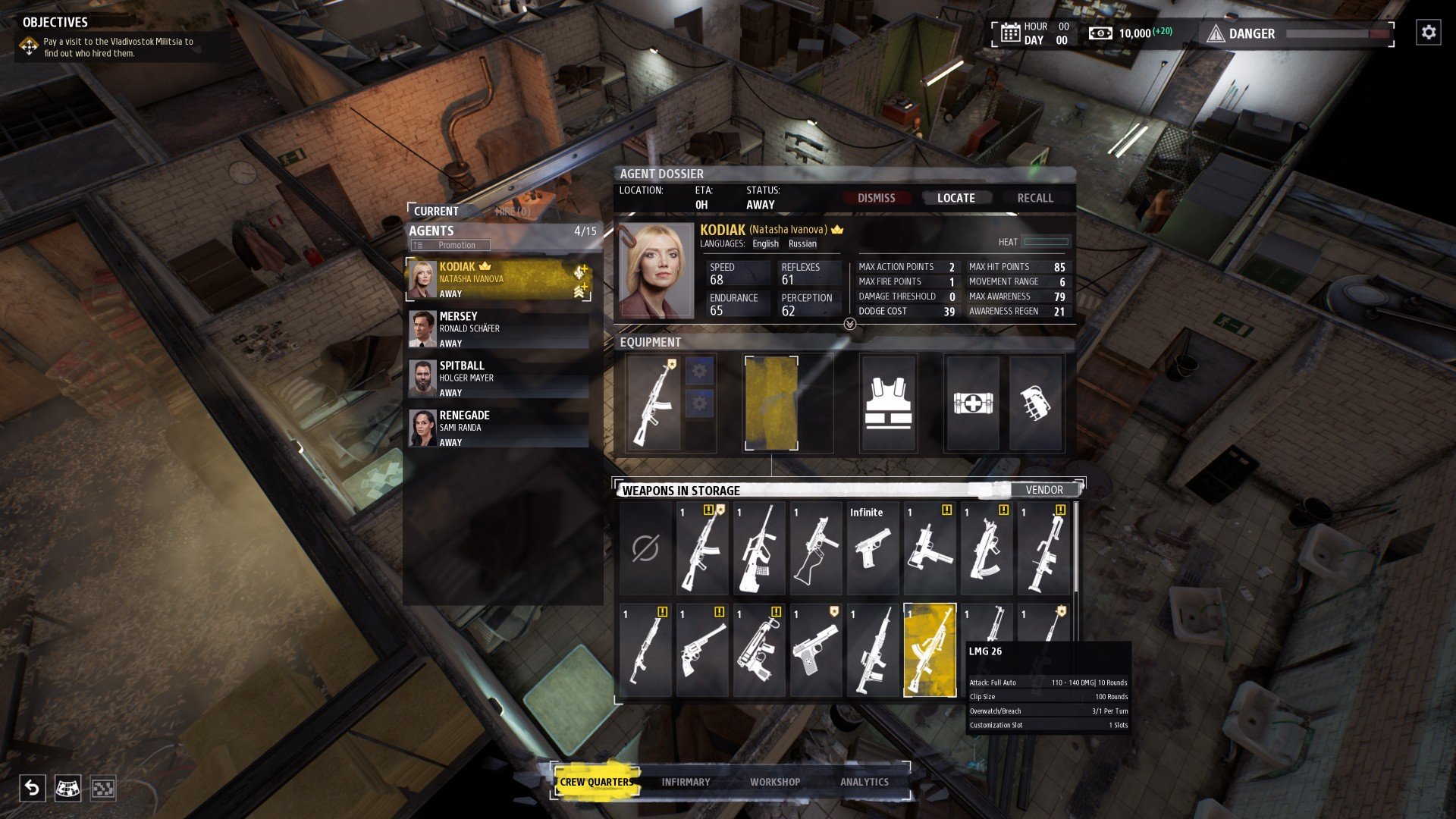 The Beatles are actually covert operatives:

Phantom Doctrine blends historical events with wide-eyed spy fiction spectacularly. Szymczak mentioned that many of the files players can add to the Investigation Board borrow from reality and well-known conspiracies.

“One of my favorites is a report to someone’s superior officer explaining that, obviously, The Beatles died in a fire some time ago. The guys traveling around the world are doubles. They’re agents going around collecting intel because it’s so easy for them to travel and smuggle information,” Szymczak said. Phantom Doctrine contains numerous nods to popular culture and real-world events, but this one takes the cake. 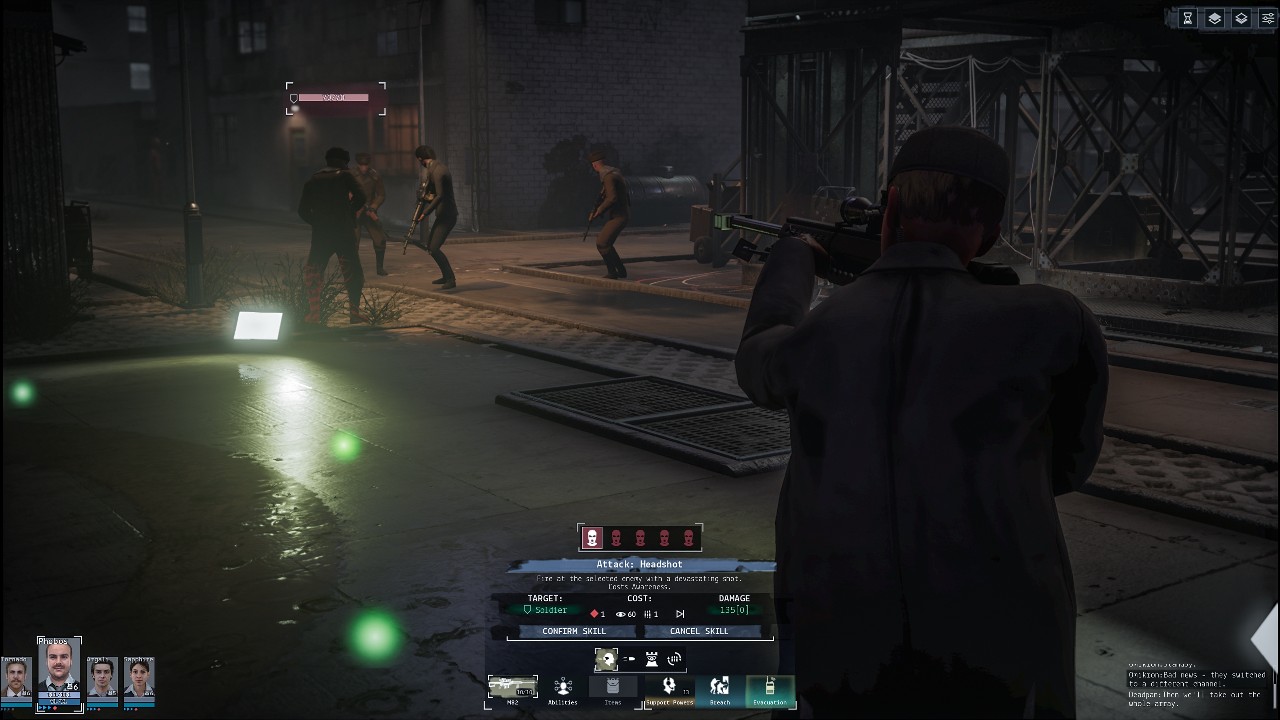 You can plant bombs in people’s brains:

In between missions, players can use secret MK Ultra techniques to brainwash enemy agents and compromise them with control phrases. But one of the coolest methods of subterfuge Szymczak shared was a cranial implant that doubles as a bomb.

“Let’s say you have to evac from a failed mission and one of your rookies is all the way across the map. You can leave them behind, and they might make it back to your base at a later date. The trick is that he might also be kidnapped, brainwashed, and sent back to you as a double agent. However, if you have [the implant] installed, the moment he’s transferred to the conspiracy cell, he’ll blow up along with all the other enemy agents there,” Szymczak said. “It’s more of a brute force approach.”

Considering these are just some of the different systems and mechanics at play in Phantom Doctrine, Szymczak’s admission that CreativeForge Games might have “overdid it” seems like an understatement. Based off of what I’ve seen, Phantom Doctrine has the potential to be one of 2018’s sleeper cells hits.