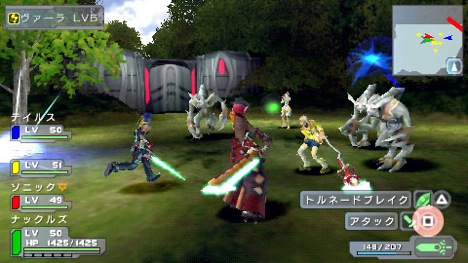 According to the boys at PSPFanboy, the Phantasy Star Portable official website was updated today with some decent information. The free demo, scheduled to release in Japan on July 14, is going to be a bit hefty. At a whopping 301 MB, it will provide players early access to both the Story Mode and online play. The demo will be available to download off of the Japanese PSN store, or at your local Japanese videogame vender.

Also, there is apparently some utterances of character profiles and downloadable content to be listed on the website soon. For those of us that can’t speak Japanese, checking out the website may be a bit of an issue. Don’t worry about that quite yet, though, because Sega hasn’t announced if the game is going to be localized.

There is still hope that the game will hop the pond. The reception of Phantasy Star titles hasn’t been that terrible in the states. Personally, my level of excitement is at critical mass. If Phantasy Star Portable hits stateside, I’ll be one of the first Americans to visit, presumably, one of the bulbous lobbies full of people tossing out emoticons every two seconds. Hopefully Sega is keeping the floating armchair ability for the lobbies. There’s nothing like scooting around people in circles while riding a pink chair.