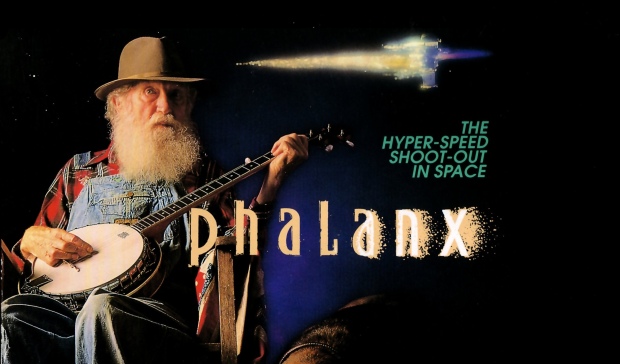 I have never played Phalanx. The SNES/Sharp X68000 computer game was never something I had the pleasure of playing. Beyond the fact that it’s a space shooter I know absolutely nothing about it. Normally in this situation (it happens) I do some research on Wikipedia or another 100 percent reliable internet source and then come out talking like I knew it all along. However, I’m not going to ruin the greatest mystery in gaming just so I can impress you.

See that image up there? That is the actual box art for Phalanx. As a child at Toys R’ Us I’d stand in the gaming aisle (or the cards in plastic pockets that you had to take up to the counter to get your games aisle) and stare at this box art and wonder WTF was going on here. Was it a brilliant marketing ploy? Was the game actually about a man with a banjo? Why did this box art exist? I never found out the answer, and I never want to for I fear the answer will be far too dissapointing. So I will never play the game.

Nor, getting to the point of the post, will I play the new WiiWare version of it. The company that created the Sharp X68000 version of the game, ZOOM Inc., are bringing that version to WiiWare in Japan for 500 points. No set release date yet. It will feature a few extra changes to the game design, but will indeed be a remake, not a reboot. Hopefully, this never makes it to the U.S. so I won’t be tempted to ruin what will no doubt eventually become the ninth wonder of the world.