I’ve gone on record more than once over my distaste for MMOs, but EVE Online has always been an exception, an asterisk slapped on an otherwise lengthy list of games I’d sooner rip my toenails off than play. Its single-shard, truly persistent persistent world is a theater of daily struggle in which command of the assets and locales that make the whole damn thing go are in constant ebb and flow. The politics are heavy, the alliances necessary, and unlike any other game, what you do in EVE has an honest impact on the world that surrounds you.

Last week CCP had me out for EVE Fanfest in Reykjavik, where the sun is barely real and every woman is gorgeous. I’d like to just express how weird it was to be a tall, pale blonde guy in a country full of tall, pale blonde guys, so much so that everyone assumed I spoke Icelandic before I opened my fat American mouth, but the fun didn’t end at simple international confusion, oh no.

I was surrounded by people that shed such insignificant concerns for a solid weekend across the world, and it’s difficult to keep from getting swept up in such enthusiasm. Top to bottom, Fanfest 2007 was a clear and present demonstration of adoration, a thousand sweaty nerds packed into one venue to celebrate their greatest addiction. And drink. Oh, the drinking.

Hit the jump for my report. 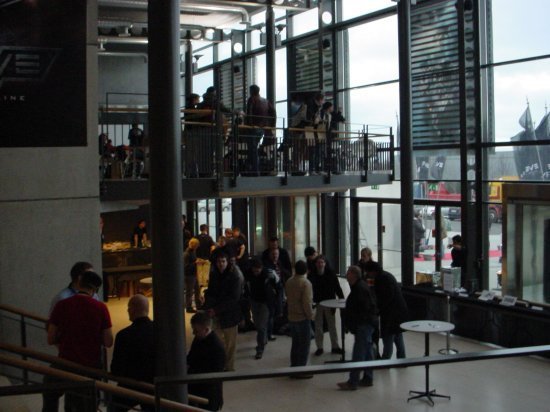 While it’s certain that the big news on everyone’s mind was Trinity, the upcoming EVE expansion that seeks to update the game engine to modern standards as well as add to the already huge amount of in-game content, the big draw at Fanfest was, of course, the community. Most of the cats in attendance knew at least some people, if not by face and name then by reputation; corp-mates and colleagues bumping elbows with developers, exchanging conversation so thick with jargon and in-jokes that it was difficult to keep up. It was rapid fire, relentless, and utterly engaging, and I remembered what drew me to EVE in the first place — for these blokes, the game is no joke.

In Jita, the corp meetup area, twelve-head tables stretched from one end of the room to the other, sparsely populated but for the occasional burst of activity, teams of players discussing strategy and the state of things over armloads of Domino’s pizza (which, by the way, goes a little light on the cheese in Reykjavik). In-jokes are exchanged, conversation is pretty light, lots of camaraderie. You could almost see the hair standing on end when rivals walked by; eyes narrowed, volume hushed. “Fucking Goonfleet,” said one, shaking his head, guiding the conversation towards plans for operations up to and through the new year.

Alliance operations are complicated, and honed over many months to see a crew through just as much time. Close your eyes and it sounds like a curious mix of role-playing and war room banter; the stakes are high, and those involved mean business. Dump a year or three into a game like EVE and it’s hard not to take it so seriously. Take one look at the latest territorial map of all the systems in EVE (and be forewarned: it’s rather huge) and it’s easy to get a sense of how much is at stake. For the uninitiated, be aware that territory in the game goes far beyond stomping grounds and forum clout; to control a system is to control its resources, to be able to mine and build without fear of getting your shit handed to you at a moment’s notice.

EVE’s economy is based entirely upon the players — over 200,000 all playing in a single-shard persistent world — and has become such a complicated monster that CCP has a full-time economist on staff to keep tabs on what’s going on. Controlling the means of production is a clear route to dominance, the final goal being, of course, control over everything that is. What some would refer to as “winning” EVE seems as unlikely as a system message from Blizzard in World of WarCraft telling you that there’s nothing left to do, shut off your machine and cancel your account — but there are some within the game that consider it a possibility, a goal worth shooting for.

This isn’t to say that Fanfest was, by any stretch of the imagination, dominated by snarling and spitting folks looking to settle their blood feuds in the cold theater of real life — nah, not at all. But for a nigh-outsider — or at least someone who has been out of the game for quite awhile — this sort of dedication is infectious. It’s a fervor that demands you to consider what exactly all the fuss is about, which now that I think about it is how I started playing EVE in the first place.

Of course, what little tension was present was no match for a few beers to smooth things out.

Fanfest was stacked with lectures and presentations aimed at various finer points of the game, the culture that surrounds it, and the future of EVE. CCP really had the hardcore player in mind planning these seminars, but it goes beyond just informing; developer roundtables throughout the weekend gave players an opportunity to voice their own opinions on the direction in which the game is moving. Players and officials alike met outside in the cold to smoke and talk about the new additions. In this atmosphere there seemed a decidedly forthright commitment to levelling the playing field and ensuring that the players were a part of the discussion, rather than declarations from on high.

Changes threatening to really skew the status quo, even, were met with limited “HEY FUCK THAT” outrage and thoughtful consideration on the part of the player base in attendance. Ambulation, a new addition to the series which promises players the opportunity to get out of their ships and interact on a more personal level, is meant to get those would-be players (perhaps a greater female base than the current meager 4%) that can’t exactly relate to being a ship into the game. It’s not exactly Second Life — far from it, in that I likely won’t be able to model dicks and drop them like atom bombs over someone’s corner of the world — but it accomplishes the same goal using a similar model, one that you can see at work everywhere nowadays in places like PlayStation’s Home network.

When you think about it, EVE is a profoundly complicated game based upon an extremely simple set of principles, and expansion can go in virtually every direction. Planets, both in terms of exploration and control, has been on the docket for years and is still something the developers want to do, and Ambulation is another way in which developers want to expand the list of activities within the game. But in CCP’s mind, EVE‘s future isn’t about sequels or new engines — it’s about expanding and improving upon what they’ve already got. EVE, they hope, will persist for decades.

And everyone seems ready and willing to come along for the ride. There were no angry outcries at the thought of welcoming new folks into the fold and expanding the reach of the game so long as it didn’t come at any cost of the things that players wanted to do. When asked after the Ambulation show about what he thought, one player said simply: “So long as I can still blow shit up and mine, I don’t mind.”

Saturday night, once the conference track proper had drawn to a close, attendees were shuffled towards the arena which had become a dark and… purple place, stocked full of beer and booze, loud music and good cheer. The bartenders were a big attraction, which I will now swear are the reason that I got so wildly smashed. Thoroughly inebriated and content to close the weekend’s festivities, the crowd really seemed to leave everything else at the door, tear loose and party their asses off, but the sense of community — even in the dark and barely able to stand — was incredible. Between shots, I overheard talk of fittings, and which would best serve a well-tanked Dominix.

Fanfest was an absolutely incredible experience, and one that I’d recommend to everyone who has the kind of overwhelming personal investment in EVE necessary to drop a few grand on the trip — or if you just want to take a look at some of the hardiest bastards to play an online game and what happens when you stack an arena with just under a thousand of ’em. Good show, CCP.