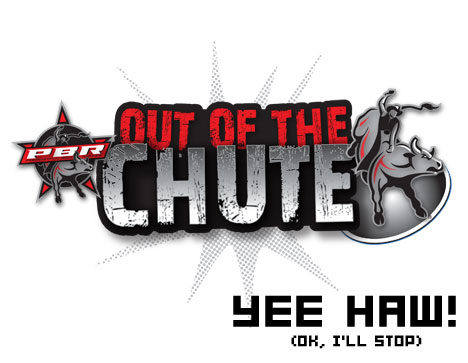 Pro Bull Riding. You mean that thing where a man tries to stay on a raving beast for at least eight seconds? You mean that activity that is recreated in bars all across the South and Midwest with a mechanical bull? Well, I’ll give it a shot. I’ve got a few minutes in between Metal Gears.

This game came into development because bull riding has actually gotten rather popular in recent years, even making it all the way to Madison Square Garden. In 2006, the PB– alright, I’ll stop. I find it interesting, but I’m sure it’s just ramble to you.

While I was there, only the PS2 build of this game was available for demo, but there is a Wii version in development, too. My one big hope is that the Wii version of this comes with a mechanical bull attachment. Sure, it’d cost $300+, but it’d join the ranks of Steel Batallion!

Alright, enough of my shenanigans. Follow me after the jump.

Pro Bull Riding: Out of the Chute is relatively simple. There is a bull, and you need to ride it. The game doesn’t worry too much about meters, or trying to make the game overly complicated. As the bull bucks and twists, you need to try and counter-balance against the furious power of the two-ton beast.

In PBR‘s career mode, you can pick from one of several famous riders, or create your own (name and appearance are the only customizable features), and then go on your way to try and become a big-shot bull rider. As you work your way through the line of major tournaments, eventually making your way to Vegas for the national championship, your rider will build up stats, improving his stamina, grip, and balance. Balancing against the movements of the bull can be rather tricky, so the stat bonuses that you accrue make things a lot easier.

As you go through rounds, you’ll test your mettle against five bulls or so per location, competing against the AI for top billing in the scores. In order to even score, you need to stay on the bull for eight seconds, and then dismount. You’re scored on how well you balanced while riding the bull, plus bonus points for a good start and dismount. If you get thrown fairly hard, your character will actually be injured, making it a lot easier to throw him in the future. If that’s the case, then you can always rest for a tournament and miss out on the prospective points, but heal up.

Of course, if this all sounds a bit boring to you, just play as the bull. In career mode, quick play, or multiplayer, you can be the vicious beast that is trying to fling the pathetic human off of your back. Just keep him from reaching that eight-second mark by any means necessary — even by using your special moves. Nothing quite like a dragon punch or a suplex, but they’re much more violent moves that stay within the realm of realism.

Unfortunately, once you throw the rider off, you can’t proceed to gore him and the rest of the people in the arena. Something about wanting to keep the game accessible to children. Pfft. Overall, the game will only run you about 4-5 hours of actual gameplay through the career mode. So besides trying to get better scores as you go through, there’s not much to play, except picking it up for a quick round when you’re bored.

When you sit down and play Pro Bull Riding, it’s fun. The matches are quick and frantic, without requiring more than you juggling the controller stick one way or the other. And when you’re going at it with another person, it was slightly reminiscent of that fun feeling I have when competing with a friend in Bushido Blade. It could easily make itself into a fun little party game, especially at the expected price of $30.

The game is still in early development — the Wii version wasn’t even ready to show — but this is pretty much the bulk of the gameplay. The Wii version should be ready for E3, so the team there might be able to tell you how it is with waggle.