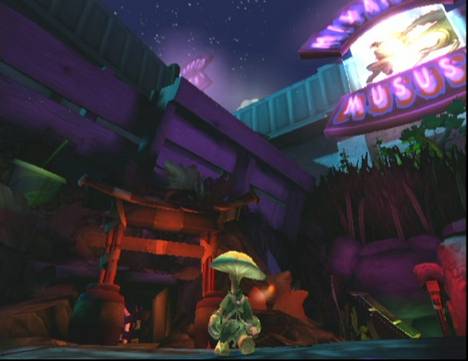 A mysterious meteorite has crash-landed on Earth and has made plants sentient. Mushrooms and other plants have evolved into creatures that can walk around, communicate and do things that normally only humans could do.

Introduction Mushroom Men for the Wii: you play as a mushroom man named Pax who will help his fellow mushrooms and plant allies fight against poison mushroom, bugs and evil little animals.

Find out all about the game, as well as what I thought of it, after the break.

The game starts off with Pax arriving in a village that also doubles as the tutorial level. Pax is introduced to the village Elder of this town who teaches Pax how to use his powers and abilities by giving him a few tasks to complete. If Pax completes all of these tasks, the Elder will reward Pax with something special.

First, Pax must open three toy containers (those things you get from a quarter toy dispensers), with each one containing a new part for Pax to use as a weapon. When you first start the game, Pax’s only weapon is a DS Stylus. As you progress through the game, you’ll find various handles, caps and adhesives, all of which you can use to create stronger weapons.

After breaking open the little containers, I received a piece of gum and a sewing thimble, which I then put together with the DS Stylus to create a hammer like weapon. Other examples of the weaponry include a stick with a bottle cap tied to the top in a mace like fashion, a razor blade attached to a match with the head of the match lit, a jacks on top of a pencil, too much more.

The game will remember all of the weapons you have created and store them automatically so you will never have to rebuild the same weapon; this is useful if you want to use the same part on a different weapon. As you find new pieces, the game will let you know that a new type of weapon is available, which you can then build and add to your arsenal. 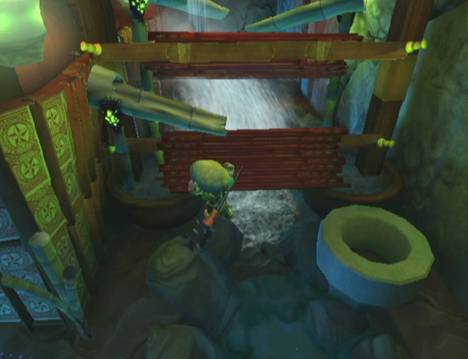 After making a new weapon, the Elder showed Pax how to fight by having him take out some flies and then showed Pax how to use the Cap Glide move, which lets Pax hover in the air for a short time (in the same fashion that Tails from the Sonic series “flies”).

After completing all of the tasks, the Elder rewards Pax … by having Pax fight a bully heavy mushroom man. To fight in Mushroom Men, all you do is waggle your Wiimote to have Pax swing his weapon. You can do a jump attack by waggling the Wiimote at the top of your jump and Pax can block with one of the trigger buttons on the nunchuk.

If Pax fails to block an attack, a part of Pax’s mushroom cap will break away revealing his brain. If the entire brain is revealed, Pax will die. Killing enemies and finding spores throughout the levels will heal Pax, but at the same time, death really isn’t an issue in Mushroom Men. If you die, you’ll simple respawn at a checkpoint as if you never died. Everything you’ve accomplished before dying will remain the same so you won’t have to retry any of the objectives you’ve completed or fight enemies you’ve just killed previously (like in BioShock).

After taking out the Bully Heavy, the Elder rewards Pax with a sacred Meteorite piece, which ends up causing some troubles as soon as Pax touches the space rock and this ends the demo for the first level.

For the second portion of the demo, I was taken to a level that shows off one of the puzzles and a track by Les Claypool. At one point in the game, Pax gains some telekinesis powers. To use telekinesis, you just need to aim the Wiimote at the screen and aim the reticule over moveable objects. The aiming reticule will change into a brain signaling that that object you’re pointing at can be moved.

Pax has arrived at a barn home to the Morel Mushrooms. The Morels are a technological advanced mushroom race that create amazing pieces of tech, but don’t seem to design them in the best manner. The Morel barn base is under attack by a group of Poison Mushrooms that are lobbing nasty things at the barn. The Morel need your help to activate their bases defensive weapons and you’ll need to solve some puzzles to help the Morel out. 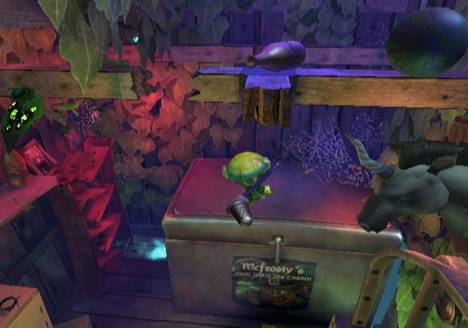 The first puzzle you encounter is one of those block slide puzzles. There are three domino pieces on the wall that need to be moved to their appropriate place but are blocked by a bunch of smaller puzzles. As this puzzle begins, one of Les Claypool’s songs for the game is started but is only a small portion of a greater music track. When you fit one of the domino pieces in the right spot, another portion of the Les Claypool track is unlocked and we start to hear more beats and instruments. The song will evolve as Pax places in each domino piece. Everything in the room, from the explosions outside to the ticking clocks, is all timed to the beat of the song.

After solving the puzzle, I’m taken to the final level of the preview build where I get to explore an entire level and go up against a Jackalope monster boss.

Pax’s adventure leads him to a shack inhabited by a vine plant race called the Kudzu. As you enter the shack, you witness a deranged meteorite infected Rabbit chowing down on the vines of the Kudzu and the Kudzu ask for your help in killing these rabbits. Well, more like force you to help them, as they closed the opening you just came in through with their vines.

So, you now have to fight these rabbit monsters that are five times your size. You could go at them one-on-one hoping that you’ll survive long enough and that any wandering spiders don’t decide to help out the rabbit. Or, you could just use your environment to take the rabbits out in one swoop. With the first rabbit you see, you see a giant fan right next to the rabbit. Right next to the fan is a special Kudzu leaf that is flat against the wall but will pop straight out when hit with some spore. Simply aim the Wiimote at the leaf and watch as the fan tips over and falls on top of the rabbit. Sadly, you don’t actually see rabbit get chopped up, as they do want to keep this game away from the M rating.

Each rabbit will be eating away at Kudzu vines near an object that will crush the rabbit once tipped over. My favorite being the rabbit that just so happens to be directly underneath a weight stack. Every time you kill a rabbit, the objective screen automatically comes up with an old school style horror movie poster that fills up as you complete each objective. The poster shows how many more rabbits you need to get and gives a clue on how to use the environment to your advantage to take out a rabbit. 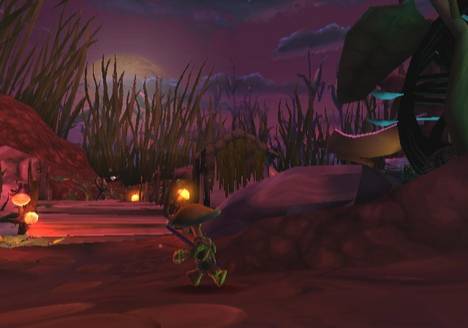 The objective poster also shows a secondary objective that you don’t have to do to pass the level, but will need to do if you’re a perfectionist. As you go around the level, you will find parts for making a flamethrower. I was able to find all the pieces but one so I couldn’t explore the additional section, as I needed the flamethrower to melt away some ice.

But there is another weapon that I got to mess with. Pax has a new weapon in his arsenal called the sticky hand. The sticky hand is one of those little toy sticky hands from real life that you usually would use to slap your friends in the face with or slap a girl on the ass on a crowded street (not that I ever did that before … ). In this game, it helps Pax navigate to different areas.

Most of the levels will also have little mini-game sections to help break up the gameplay. In the shed level, there’s a portion that will remind you of the original Donkey Kong game. There is a set of ramps with rolling chicken eggs coming through. You have to run on the ramps and jump the chicken eggs to win a meteorite. You can get hit by a couple of eggs, but too many and you’ll lose out on the meteorite. 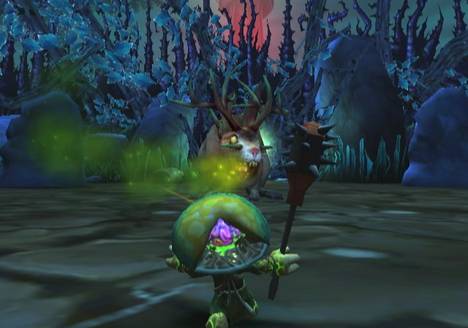 After killing all of the rabbits, it was time to take on the Jackalope boss. Pax enters a circular enclosure filled with some rocks and the Jackalope rabbit sitting right in the center of the stage. You can’t directly hurt the Jackalope with your weapons and every time you get near the rabbit, it will just toss you away with its antlers. The only way to hurt the Jackalope is by angering it. I won’t reveal what exactly you have to do to get the boss angry but once it is, it’s ready to charge your ass. You have to make sure you’re standing right in front of a rock and jump out of the way at the last second so the rabbit rams its head into the rock. Basically, it kind of turns into a bullfighting match. After the rabbit slams its head a few more times, the Jackalope dies and the demo ends.

Overall, I was pleasantly surprised by how much I liked the game. It’s very fresh and has some unique things going for it. I love the level designs and the Mushroom speak (which is in the same vein as Sims speak) is kind of adorable. The game also has a very Oddworld feel to it, which as it turns out, was one of the games that Red Fly Studios looked at when designing this game. 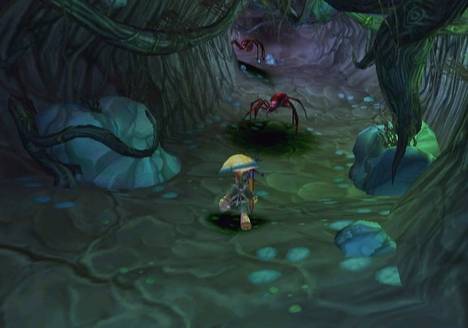 My only problems with the game at this point is the camera and the objective screens. The free aim camera is mapped to the D-pad and using the D-pad for any game as the camera is never a good idea. It’s not game breaking annoying, but it does get a little frustrating, especially in smaller rooms. The auto recenter with the minus button helps a little.

With the objective screen, every time you complete a goal in a level, the objective movie poster screen will automatically pop up every time. Again, not game breaking annoying, but it really takes you out of the immersion every time this happens. It hurt my experience a little having to halt my progress just to look at this. I like the movie poster so I’m not saying take it out, but there should be an option to let players choose whether to have this happen automatically or not. If players pass on the posters from popping up, maybe we could see all of the goals/collections pop up on the bottom or top of the screen similar to the original Banjo Kazooie. Every time you collected something in Banjo, a small menu display popped down from the top of the screen, showing your current item count. So something like 4/7 bunnies killed with a little evil bunny face next to the text, 5/9 meteorites collected with a meteorite picture and so on.

Otherwise, I’m really looking forward to the game. Mushroom Men is expected to drop this November. I should be getting my hands on the DS version soon so expect a preview on that sometime coming up. The Wii and DS story is connected, but neither is required to understand the story presented in either versions of the game.