Yesterday, I had an opportunity that comes once, maybe twice in a lifetime — the chance to rekindle an old flame. No, not Nick Chester, we’re broken up for good, you hear me? You only have to leave this editor at the altar once before he wises up.

Affairs of the heart notwithstanding, ArenaNet had yours truly and a slew of others down to their Bellevue offices to get a feel for the upcoming Guild Wars expansion, Eye of the North. My playtest wasn’t just an opportunity to dig into ArenaNet’s latest offering for the faithful; it was a chance to get reaquainted with one of the few online games that really hooked me. I’m out of college and unemployed, so now seems a perfect time to get back into the business of scouring Tyria for crafting materials, wandering knights and a bit of friendly boxing with a pack of angry giants. 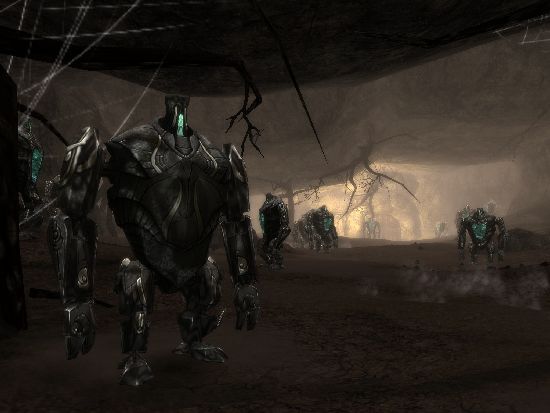 Guild Wars is a bit of an anomaly for me. I’m not the sort that you typically find lurking around MMOs — I play a fair bit of Counter-Strike and spend a good deal of time on Xbox Live, but mention World of Warcraft and my eyes glaze over, sink into the back of my head, and send me to a place deep inside myself where the words “uber” and “ftw” have been stricken from the public lexicon. That’s not to say that some of the characteristics common among MMOs on the whole don’t exist within Guild Wars, but the game had always struck me as walking that line between massive and… well, everything else. There’s an emphasis on skill and timing that runs parallel to the common conventions of the genre; it’s that very emphasis that got me hooked in the first place.

In Eye of the North, the last expansion for Guild Wars prior to the move to its anticipated sequel, the core gameplay dynamics remain largely the same — no unnecessary overhauls to speak of here, just more of what matters: stuff. That’s the technical term, mind, so I’ll dig a bit deeper: designed for characters who have already reached level 20, Eye of the North introduces 150 (!) new skills to collect, 18 dungeons, a slew of new weapons and armor, 10 new heroes and a wealth of story to bridge the original saga to the forthcoming Guild Wars 2. That part’s particularly important, but we’ll dig into that in a moment.

Our playtest began in Oola’s Lab, one of the new dungeons, in which we got to see some particularly nasty traps and boss monsters and get a feel for the navigation. Exploration is paramount in these adventures in the deep, evidenced perhaps most especially by the lack of any immediate map or navigation tools — it’s just you and the darkness that surrounds. As you proceed you’ll pick up area maps that will reveal small parts of the map to you and show you the locations of puzzle solutions, treasures, mini-bosses and super-ultra-kill-your-face dungeon lords. Out of practice like I was, I died plenty of times and got a lot of use out of the developer debug commands to patch myself up more often than I believe the developers themselves do, but the experience was quite promising overall —  I suddenly felt very nostalgic for Phantasy Star Online‘s Caves and the sort of manic cooperative experiences I had with it. 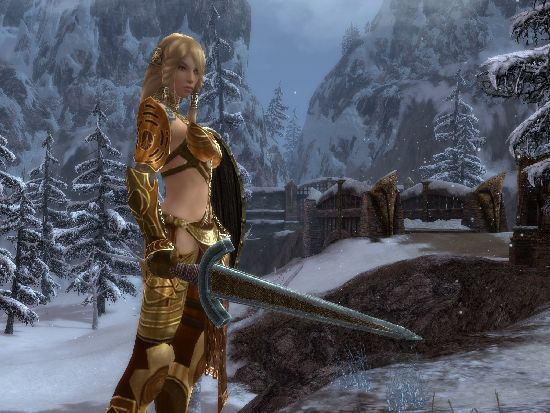 Our brief introduction to the expansion’s new storyline also acquainted us with GW:EN’s new races: the Norn, massive warriors from the Shiverpeak Mountains; the Asura of the Maguuma Jungle, and the Sylvari. These races are set to be playable in Guild Wars 2, and appear in Eye of the North as heroes and quest elements. You can build up reputation with these races by completing particular tasks, and a higher reputation will give you access to better weapon and armor sets and other bonuses. The Norn, for example, will grant you street cred if you can, y’know, beat them to a bloody pulp. They give you lots of opportunities to do this — namely, every time you talk to a new one. Being a culture that probably watches a lot of UFC and drinks their weight in protein shakes, the Norn won’t even deal with you until you’ve won their respect by conquering them in mortal combat.

Similarly, Eye of the North offers other opportunities to build rep in the form of new minigame-esque tasks; the Norn fighting championship, I think, is poised to be a big fan favorite. Once the proper quest has been accepted, your character is given a pair of brass knuckles and whisked away to an arena in which he or she must conquer a fleet of head-sledging Norn looking to rough you up good. Once you’ve equipped the knuckles, your character has access to a litany of skills appropriate to the fighting style — block, uppercut, punch, kick, et cetera. These skills recharge so fast that the game becomes something not unlike a proper fighting game. To win, you’ve pretty much got to block at the right time, and pay attention to the animation frames of your foes to time your own attacks. Working your way up the ladder promises a slew of goodies and a good deal of respect from your hosts — a hell of a diversion from the main game.

The diminutive Asura offer something similar: to win their favor, you’ve got to succeed at Polymock, a game that will no doubt draw plenty of Pokemon comparisons, and not without good reason. The game goes like this: you choose three figurines representing different monsters and send them into combat, and your opponent does the same. These monsters are positioned on opposing platforms and, when combat begins, proceed to hurl all sorts of spells and nasty hexes upon each other. Each monster has a unique skillset and, therefore, must be chosen carefully as to counter whatever force they’re up against. Winning will net you new Polymock pieces, a boost in your rep with the Asura, and will also unlock armor and items. There are 18 Polymock pieces all together, giving the player ample opportunity to mix and match his elite squad of ass-kicking hellspawn appropriately for any given situation. 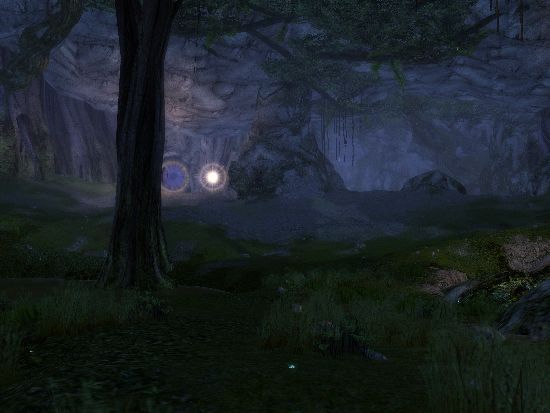 So, if I was to say something along the lines of “this is one of the most beautiful games available today”, you might be surprised. Guild Wars has been around for a couple of years, and while some small engine updates have been worked in — shader technology and the like — the graphics remain largely the same. DX10 might be the next big thing, but an engine won’t have much of an impact if the art design isn’t there to back it. Guild Wars has always looked fantastic, and ArenaNet owes that to the absolutely insane art team they’ve got. The walls at their offices are literally covered with concept art and character designs that really give you a sense of how much work goes into achieving just the right look and style for the environments, architecture, and characters.

Many of the areas new to this expansion have that lush, green, rich look about them — reminiscent of pre-Sear Ascalon, which we were told is a response to a great deal feedback from the community. Show us more of them pretty environments! There’s plenty of beauty to go around, so much so that my eye-candy hunt was accommodated with a developer command that allowed me to run ridiculously fast and take more screenshots. I could go on and on about this, but rather I’ll just direct you to the gallery where you can take a gander for yourself. If you’re a fan of truly excellent art direction, GW:EN has it in spades.

Like I mentioned earlier, ArenaNet has positioned Eye of the North as a bridge between the original series and its upcoming sequel, Guild Wars 2. The introduction of the new races is definitely key to that, allowing players to acquaint themselves with what will eventually become playable, and orient themselves to their place in the game’s storyline. What’s certain to please veteran players is the inclusion of the Hall of Monuments, a shrine to your character that lists his accomplishments and accolades, and essentially a place to show off just how badass you are. It’s not limited to just bragging rights, however; your “descendant” in Guild Wars 2 will reap the benefits of your exploits in the days of yore, and your achievements as listed in Eye of the North will carry onward to the sequel. It’s a great way for hardcore players to feel as though they’re accomplishing something in the looming shadow of their next addiction.

With 150 skills, 18 dungeons and a slew of new content, Guild Wars: Eye of the North looks to have something for everyone, including lame lapsed players like me. If it’s been awhile since you’ve picked the game up, go load up your old character (it’ll still be there) and get ready for the last new content before the big dance. Eye of the North launches at the end of this month.