The celestial seasons seem to troll by for the diehard Fallout franchise fan waiting impatiently for a sequel. While there was Nick’s preview of Fallout 3 back in July and a more recent mention of a potential 200 plus endings (now 500-plus, according to Bethesda), there has been little since to carry the dire fans along until its release this fall.

But look no further! This week I had a chance to sit in on a second preview of Fallout 3 with VP of Bethesda’s PR and Marketing, Pete Hines. Through the course of an hour he led us through the process of developing the protagonist’s character, the first encounter with the illustrious Dogmeat, as well as the various approaches to combat in the game.

Hit the jump to take a dive into your next Fallout 3 fix. 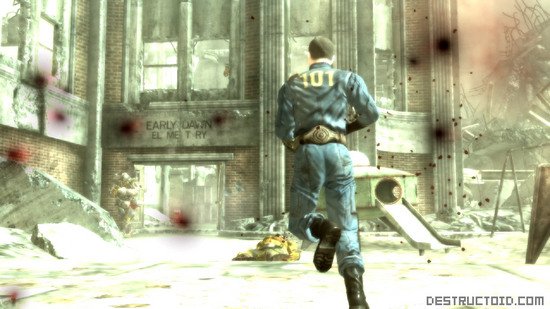 Like any self-respecting Vault Dweller, the player is brought into the world in a cold, fluorescent-lit underground hospital cell. Bleary-eyed and filled with wonder, the player begins the game through the perspective of a newborn infant with the singular capability of pressing the A button to cry. Your father (also known as the father you always wished for, played by Liam Neeson) gazes fondly at you coveted behind a hospital mask and glasses. Newborn life in post-apocalyptic Washington, D.C., doesn’t seem to be all that bad after all.

This is where you begin the first stages of protagonist development, choosing whether your character is male or female while designating the eventual physical characteristics and nationality you will display within some solid years of maturity. A set of pre-structured avatar faces are available for your convenience, but if you’re truly up to customizing your character’s look, you’ll have as many appearance options as the character creator in Oblivion. Once your basic characteristics have been determined, your father removes his mask to reveal someone who happens to look like he’s related to you. Unfortunately, as soon as this momentary father-child bonding is established, your mother cries out in pain and you are quickly wheeled out of the hospital room and thus fully brought into your bleak existence as a member of Vault 101.

A year passes and you’re segued to taking your very first steps as a child. In this sequence, you become accustomed to walking and exploring the world around you as you prodigiously escape the imprisoning child-safe gates. While exploring the room, you can fuddle about with various toys and even climb up on your father’s bed for some mischievous jumping. Eventually, you’ll discover the You Are Special toddlers’ book, which will ask you to assign the particular S.P.E.C.I.A.L. (Strength, Perception, Endurance, Charisma, Intelligence, Agility, and Luck) characteristics for your protagonist. Although you are limited in the amount of points you can use in establishing your traits, the book is adorably complemented with clever nursery rhymes and illustrations that effectively lift the pressure of crafting the ideal character. Eventually, your father returns to discover your breakage from kiddie refinement, but of course there are no negative consequences, since you can innocently burble back at him with “ga-ga’s” and “da-da’s”, with the help of the trusty A button.

Fast-forward a good nine years and you open your eyes to your 10th birthday party in a Vault cafeteria — the handy Pip-Boy 3000 given to you as your very esteemed birthday gift. Wished many happy returns by your childhood friends and father, you’re notified by an adult Vault Dweller that you will begin working full-time immediately the next day. As a full-fledged 10-year-old, you can now have dynamic conversations with others, giving you the opportunity to flirt with your grade-school crush or try your best at appeasing the cool kids of the Vault. Eventually, your father pulls you aside and gives you your first lessons on manning a rifle. My only hope is that your first weapon is the infamous Red Ryder BB Gun, but these are wishes left to be confirmed. 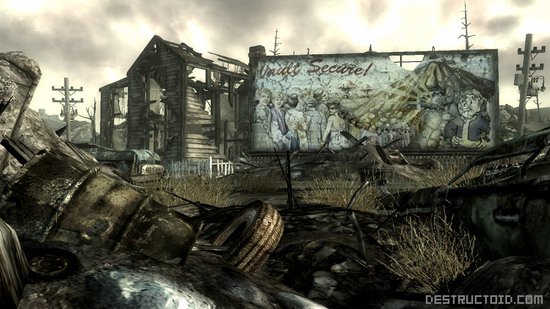 In proper following of the previous Fallout games, your character will eventually come across the ultimate bad ass doggy companion, Dogmeat. His owner destroyed by some means of carnage or another, you approach a wandering Dogmeat in an elaborate junkyard and engage in conversation to eventually convince him to tag along. Naturally, his responses are limited to friendly woofs and barks, but with enough persuasion, Dogmeat determines to aid you in your journey in search of your father across the post-apocalyptic landscape. This companionship proves to be highly beneficial, as you can request Dogmeat to search the surrounding area for helpful items such as weapons, food, and drugs. Diligent dog that he is, Dogmeat will search your surrounding area for up to an hour to scour every inch of land for items you could use. However, mistreatment of Dogmeat and assigning him to dangerous tasks could result in the loss of a faithful friend forever, so it’s wise to be cautious when sending him off to dutifully fulfill your requests.

Pete also demonstrated the use of the Fat Boy weapon (basically a mini-nuke launcher) while in the barren junkyard, which, as one could imagine, led to many glorious and explosive results. I, for one, certainly tittered with glee at the sight of a mini mushroom cloud in the distance. But remember, kids, the use of nuclear weapons goes hand-in-hand with radioactive aftermath. Shooting off nuclear attacks will result in contaminated land, which you will have to carefully avoid so to not absorb the damaging post-boom radioactivity. 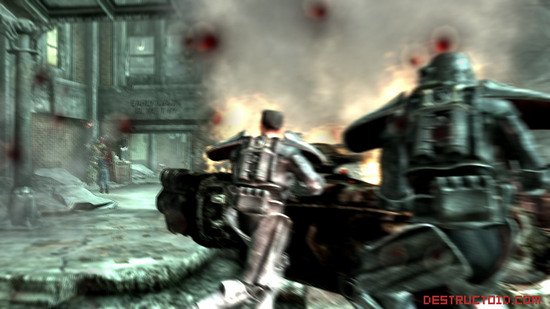 V.A.T.S. and Combat (A Survival Guide against Radioactive Ghouls and Mad Max Ruffians)

Between the various quests in the game, your character will additionally have to travel terrain that is lined with enemies. If desired, you can avoid violent run-ins through the use of strategy and stealth; however, it’s important to know how to properly battle an enemy if, say, a radioactive Ghoul ends up glowing and growling behind your back. This is where V.A.T.S. (Vault-Tech® Assisted Targeting System) comes in handy. By way of literally halting time in its shoes, V.A.T.S. allows the player to hone in on an enemy and precisely target various body parts for attack. Once your moves are queued up and activated, the camera pulls back in a variety of action-packed angles to fully illustrate the various ranges of bodily explosions that soon follow. Each individual weapon you use has a myriad of camera angles and post-limb-flying shots that ensures the ultimate rewarding experience for all that satisfactory bloodlust you reserved to pop a cap in that ghoul’s ass. While V.A.T.S. is the generally more strategic and successful approach to combat, players can also choose to attack from a first- or third-person shooter perspective if desired.

These combat techniques were demonstrated in two scenarios. The first resembled a dark and dingy abandoned building that was creeping left and right with ugly-as-sin ghouls. Not only were there regular Ghouls (humans who’ve had their brains fully deteriorated by radioactivity), but there were also Glowing Ghouls who have fully absorbed the radioactivity and effectively heal their brethren by a radioactive burst of curative fluids. Narsty.

The second scenario had the player climbing up the rusty escalator exit of a mall and onto the battlefield before the Capitol Building. In this instance, Pete had loaded his player with a tank-strength Brotherhood of Steel armor suit. The suit, while intimidating and defensive, limited his range of motion and visual perception, as it was clunky and heavy to move around in. Once surfaced, the glaring sun reveals a flat and dry terrain littered with trenches and various trash of war. While running across the battlefield, you may run into an aggressive mutant with a thirst for blood or get into the middle of a mini-battle between two opposing gangs. You have the choice to get involved with the action or move quickly on your way.

As you go between the desolate mall and the Capitol, you’ll pass a detailed rendition of the Museum of American History in all its apocalyptic glory and deterioration. Bethesda has done a stunning job in recreating the nation’s capital in its most degraded, ruined state, eliciting a sense of wonder and curiosity through the interactive exploration of the environment alone. While the game is set in Washington, D.C., the city only occupies a fourth of the game, the world map also extending to the suburbs of the city. When Pete revealed this tidbit of information, the one and only N’gai Croal inquired whether the terrain of Baltimore would be included in the game. Pete admitted that Baltimore was not an available area for exploration, and Mr. Croal and myself released our hopes of Avon Barksdale, Marlo Stanfield, or any other The Wire characters making a cameo debut in Fallout 3. It can be further assumed that you will not obtain Omar Little as a recruitable NPC in the game. A crying shame, I tell you.

The Wire fan-girlism aside, Fallout 3 is still looking to be a pretty fantastic game, and according to Pete, a very good sequel to the series. While the previous Fallout games took place on the west coast, the immersive and high-def quality of a post-apocolyptic Washington, D.C., is scarily convincing and unique unto itself. It would be of no surprise to me if the game thematically commented on modern themes of government and war, but so far there is no revealed specific significance to the game’s setting.

What’s waiting to be demonstrated now is the procedure through the various in-game quests that eventually determine the nature of your character’s morality. According to Pete, the writing for the game is a combined effort between game designers, engineers, and producers — selective game development teams build individual quests and eventually take their finished work back to the rest of the team for review. Will this approach generate a cohesive yet diverse set of side-quests for the player to explore? Furthermore, the main quest can be completed in a mere 20-25 hours, and amidst discussing the hussle and bussle regarding the proposed 200 endings Pete revealed that they were up to 500-something endings now. It’s important to note that these ‘endings’ could easily be something as minimal as a variation in the narrative depending on what you managed to accomplish, but the question still remains as to how (or why) one would possibly experience all of the endings.

As it is, Bethesda has given us something crunchy enough to chew on until the next teaser. As for me, I believe the ultimate success of Fallout 3 solely depends on the complexity and variety of experiences derived from the individual quests. I hope for and look forward to participating in the revered moral ambiguity and rich dialogue that was so preciously celebrated in the past Fallout games, but has yet to be revealed to the public. When asked whether the moral choices in Fallout 3 were presented as black and white options, such as is the case in BioShock, Pete replied that there were a lot of gray areas in this game. With hope, these gray areas are what will truly define Fallout 3 and aptly set it within the ranks of its predecessors.

Fallout 3 is still on track for release this fall for the Xbox 360, PS3, and PC (now with Windows Live achievements).