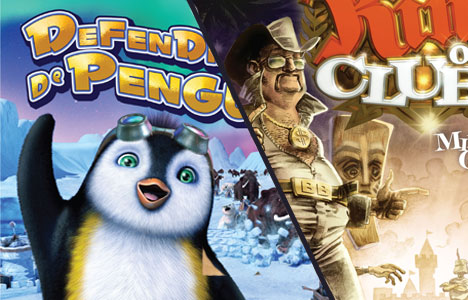 Good ol’ DMV is back again with a few more games for you. Recently, I’ve been talking about some games like Pro Bull Riding and Looney Tunes: Cartoon Conductor, but here are two gems: Defendin’ De Penguin and King of Clubs, another set of games I got to try out while visiting Crave Entertainment up in New York City.

I can tell you’re excited just by hearing the names. The first title, Defendin’ De Penguin is a tower defense game that’s aimed towards kids. King of Clubs, the other title in this feature, is a miniature golf game. So, without any other interruptions, I invite you to follow the jump and find out about these two titles.

First, let’s tackle Defendin’ de Penguin. Like I mentioned before, this is a children’s Tower Defense (TD) game. For those of you not familiar with TD, the idea is to protect your village from waves and waves of enemies that travel down a set of roads by building towers to kill all the enemies.

I’ve been a bit of a fan of TD — whenever I played Warcraft 3, TD was the map that I would play. So, I knew what to do when it came to Defendin’ De Penguin, tutorials be damned. And that made the game slow. I know, it’s directed towards kids, but here’s how things went:

In the first round, you build two towers, and that takes care of all the enemies rushing. From that point on, each round you get a new tower, and if you build that tower, you’ll take care of all the enemies that come. Once in a while, out of boredom, I’d build an extra tower or two, and it would catch the enemy that barely made it through my poorly constructed arrangement of towers.

For kids who have never played Tower Defense before, this is a good introduction to how each tower works, getting to see the effects and all, etc. The problem is, the game goes very slowly. As in, one or two enemies come every 10-15 seconds, turning the round into a 10-minute-long affair. After a while, I’d just set the Wiimote down and start watching people playing other games nearby, and then take some notes on everything.

So, once you’ve gone through the game, what next? Nothing, apparently. The game only features a story mode with three difficulties (hard wasn’t available for me to play), and that’s about it. There’s no wave mode, which could launch endless waves of enemies at you, to at least give the game some replay value. Go through the story mode, which could easily be tackled in a day, and then that’s it.

The game is competently built, that’s for sure. It’s a good, solid introduction to TD for kids, but it’s something to pick up on GameFly or Blockbuster if you need something for the kids on a rainy day. Right now, the game is slated to come out sometime next month for the Wii (the version I played) and the DS, for $29.99.

Next up is King of Clubs for the Wii. As the one-sheet attached to the game says, “Tee-off against the wackiest golfers this side of – like Bubba the Elvis impersonator, the buxom bombshell, or the tough guy truck driver.” So the game takes over-the-top course designs, gives you a “wacky” character, and lets you have at it.

Features-wise, it’s just fine. Multiplayer competition, time attack mode, etc. The game’s graphics are on par with other titles on the Wii, so I can’t claim it’s spectacular, nor that it’s an area they skimped out on. The important thing to tackle here is the controls.

I remember a while back, Rev talked on Podtoid or RetroForceGO! (certainly not on Podtoid-san, Japanator Radio, or Spoiler-san, though) about using the word “wonky” to describe controls. I’ve played some games with bad controls, but I can definitely say that King of Clubs is a game where the controls are wonky. The remote has a hard time sensing where the club is, for the purposes of measuring how powerful my swing is going to be. I often had to just wave the controller around willy-nilly in order to get it to pick things up, and when it did, it was extremely over-sensitive. Timing was also an issue — when I would swing the controller, it would take a second to respond, often making me miss key gaps in the course obstacles.

The game’s physics are like playing on asphalt. The ball will pretty much stop dead in the water wherever it lands. It might bounce once, but it never rolls. While it may be “wacky” or “crazy,” but it sure doesn’t make for fun golf. The game is billed for August of this year at $30, but it’s not a title I’ll be picking up.