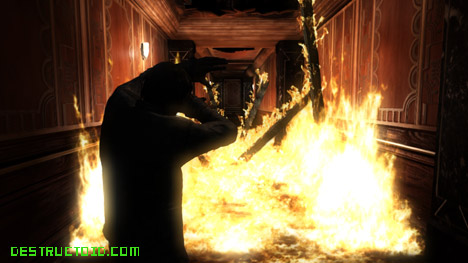 Impatiently lurking with bated, fetidly undead breath, Atari’s upcoming game Alone in the Dark has a June 24th release that will launch it into 2008 as the first blockbuster survival horror game of the year. This Monday, Atari previewed the modern sequel to the Alone in the Dark series in the dimly lit Dogpatch Studios in San Francisco, appropriately accompanied by a decor of fake flaming oil barrels and Central Park-flavored appetizers such as salted pretzels and tiny hot dogs. They were delicious.

The presentation, introduced by Infogrames’ president Phil Harrison and demonstrated by producer Nour Polloni, illustrated some of the key experiences in store for the game that hope to deliver the Alone in the Dark franchise back amongst the ranks of today’s more popular survival horror titles. With plenty of innovative approaches to the genre that range from dynamic environmental effects to a seemingly seamless cinematic gaming experience, will the new Alone in the Dark make a noble enough impression to match its series’ historical prestige?

Hit the jump for my personal impressions and a hands-on experience with Alone in the Dark.

The new Alone in the Dark will feature series protagonist Edward Carnby, this time faced with the bizarre and supernatural mysteries that riddle modern-day Central Park. In an attempt to develop a compelling version of the series for today’s gaming audience, Polloni stressed that the impending cross-over between film and videogames heavily influenced the “truly cinematic experience” of the game. In this spirit, the game will feature a chapter-based format divided into eight individual parts, each laden with carefully developed story arcs of revelations, conflicts, and cliffhangers. If you happen to forget what was happening the last time you were playing, you can watch the ‘Previously on Alone in the Dark‘ trailers that conveniently precede each episode.

As was earlier announced, one can pause the game at any point to access the ‘DVD Chapter’ select menu, which allows players to rewind, fast-forward, and skip around between 75% of the game. While the multiple endings (reportedly, two) aren’t accessible without unlocking them through enough gameplay, this allows a player to progress through the game without being frustratingly hinged by a difficult task that can be solved later.

Although this innovative feature could potentially destroy the progression of a game that is pinned around film-like plot development, I highly doubt it will encourage players to wreak havoc on their narrative experiences. When I went to play the game, my first instinct was to fast-forward and play various parts that were anything but the beginning. However, realizing that this approach left me generally confused and misplaced in terms of what the hell was going on, I recognized that linear progression through the game is obviously the more optimal experience.

What concerns me more is the player’s seamless ability to transition between their role in the game and their role of the person fast-forwarding to the next part of a movie. While convenient, this feature could potentially deter the player’s involvement with the role as Edward’s character if used too casually.

Beyond the episodic format, the game features other attributes that attempt to blend the interactive with the cinematic. The game is lacking any obvious UI with the exception of the occasional tutorial tips, providing a movielike perspective on-screen. This experience was particularly impressionable in the first part of the game, where Edward wakes up in a blurry first-person perspective that requires the player to continuously blink by pushing the right analog stick in order to regain clarity. As Edward is shoved ahead by a henchman, the perspective necessitates the player to continue blinking, truly evoking a confused and bleary-eyed introduction into the madness that’s on the brink of unfolding.

A highly dynamic environment continues to flavor the gameplay in cinematic fashion, as rooms literally crumble away in real time through the first part of the game. As giant fissures suddenly crack open in the floors, live wires swing down from above, and explosions of various magnitudes blockade your path, the player must pay careful attention to all angles of their environment in order to successfully progress. This fact became apparent whilst I was sidling along the edge of a disintegrating building and had to cautiously avoid both rubble falling from above and an exploding car that flung up nearly close enough to smolder my feetsies.

Dynamic fire and light effects also greatly play into many of the puzzles the player will encounter. Polloni noted that every surface has an applied degree of flammability that can often be used towards the player’s advantage, while simultaneously posing as a toasty trap. Furthermore, by way of glowsticks, Molotov cocktails, and other brightly lit objects, all environments can be dynamically lit to foster illuminated pathways in the dark or glowing distractions for enemies.

Combat and Object Use

With all the bloodthirsty undead goons teeming in Central Park, Edward will naturally need to engage in combat. While this can be administered by shooting the enemy or hacking them to pieces with an axe, Alone in the Dark encourages a flexible and object-savvy approach to demolishing obstacles. Edward will only be able to carry what can fit inside his jacket and can equip one item per hand, thereby forcing the player to pay close attention to pocketable resources and how they can be utilized with the environment. These objects are not always obviously placed, and may require intensive searches through cabinets, shadowy corners, or even behind visors in abandoned cars. The player may also find various non-pocketable objects within their environment that they can pick up and swing around using the right analog stick. This puzzle-like quality to the gameplay was aptly demonstrated by Polloni’s previous tech demo, and for me, initially denoted an adventure game-like puzzle experience. I stress initially.

When actually playing the game, the object-oriented action was a lot more clunky and difficult to wrangle. Picking up a trash can, for example, and attempting to wield it against a blocked door, took many tries before I was actually successful. The same case applied when swinging around an axe to mince a foe to pieces, as the process was just not as easy as it was made out to be.

In regards to the use of pocketable objects, while the concept of using sticky tape on a bottle of flammable liquid to devise a cleverly delivered explosion is fairly interesting, this function distracts the player from the game’s horror-themed pursuits. Complicating oncoming zombie attacks with these object-oriented tasks places emphasis on the action as opposed to the scary obstacle, thereby making the experience much less scary overall. Perhaps this experience is more fully developed as one becomes accustomed to the gameplay mechanics, but overall I was never truly fearful of anything that was attacking me, because I was too busy figuring out what object combo to use next.

Alone in the Dark does make some interesting impressions by exploring features that break some gaming molds, but I felt that the overall experience was somewhat inconsistent to the developer’s aspirations. While the real-time explosions and environmental effects are compelling, the clunky object-oriented gameplay had me distracted from much of this impressive presentation. In the same vein, although much of the visuals are laid out to capture a compelling, cinematic experience, the character designs and interactions are so unconvincing that I developed very little interest in the actual story.

Altogether, this game is teetering on the edge between success and failure for me. If I had more time to become accustomed to the gamplay and give the narrative a chance to sink its hooks in, perhaps the current disconnect between features would seem less of an issue. But while the core ideas surrounding Alone in the Dark seem to be all there, many of the key features seem poorly executed.

Alone in the Dark will be available June 24 for the PlayStation 2, Wii, PC, and Xbox 360, with a PlayStation 3 release aimed for this fall.

Filed under... #Alone in the Dark#Atari#Survival Horror