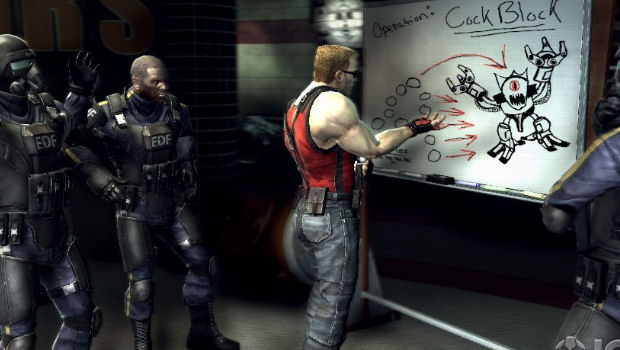 An online petition that asks Walmart to boycott Duke Nukem Forever is gaining some traction. The petition kicks up  stink about DNF‘s “Capture the Babe” mode, in which women are spanked on the arse to keep them from obstructing the player’s view.

“In this disturbing version of ‘capture the flag’ the player is tasked with kidnapping a woman from his enemy’s base, throwing her over his shoulder, and carrying her back to his base to share the spoils,” claims petitioner Shelby Knox. “If she starts to “freak out,” the player is encouraged to slap her on the butt until she shuts up.

“To be clear, Duke Nukem Forever makes a game out of physical and sexual violence against women … the Capture the Babe mode of the Duke Nukem game, which will be played primarily by young people, sends the message that physical and sexual violence against women is normal, acceptable, and even funny. It’s not — and we have to say so.”

Here’s the thing. Duke Nukem Forever‘s premise is pretty sexist, and one can’t really deny that. You know what though? Does it really f*cking matter? When it comes to fictional people doing fictional things to each other in a fictional world, does it really affect you? No, it doesn’t, no matter how much you pretend a game like DNF could influence society with the “messages” you’ve projected onto it.

Seriously, how does it send the message that violence against women is normal? What’s normal about spanking women while people shoot at you with a shrink ray?