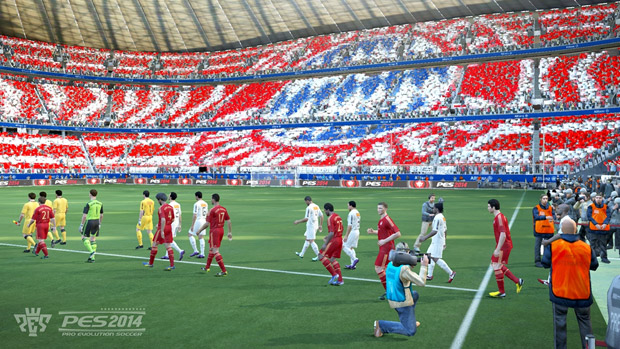 First look at this current-gen title

The latest installment of the Pro Evolution Soccer series, PES 2014, will share the same engine as Metal Gear Solid V: The Phantom Pain. The Fox Engine gets around! Konami is going all in with hyping this one, stating that PES Productions worked from the ground up and won’t be bogged down by “dated animation systems and AI elements.”

“Thinking outside the box on an annual series such as PES is not easy, but the Fox Engine has allowed us to develop such a level of freedom that we are constantly realizing ways of making PES 2014 a true representation of football,” said creative producer Kei Masuda. “From the moment football fans pick up the controller and experiment with the close control, player movement and get to know how teams work and move, we are confident that they will see a game no longer limited by technology, but capable of growing with them and constantly surprising with the breath-taking quality they have to come to expect from the real thing.”

Curiously, PES 2014 is planned for PC, PlayStation 3, Xbox 360, and PSP — no next-gen home consoles or even current-gen handhelds. I suppose that’s where the main audience is at this point. But … PSP?