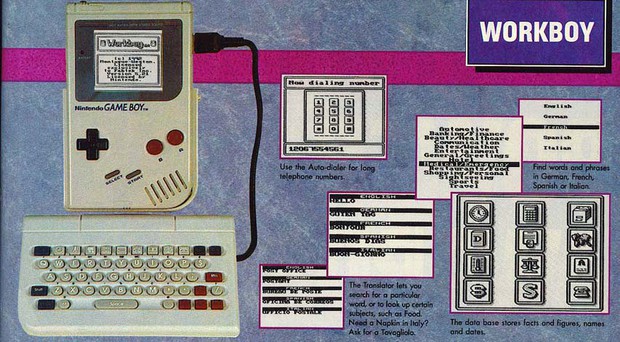 [Last week I wanted you to tell me about the awesome and/or asinine peripherals you’ve come across in your time as a gamer. nekobun has noticed a trend across all platforms and console generations, and writes about the keyboard add-ons that seemed to exist for almost every platform. Want to see your own blog on the front page? Write a blog on the current topic: Acquisition. — JRo]

I’m not sure if it was an early symptom of the writer’s bug or just a fascination with adding more buttons to things, but for the longest time, I’ve been fascinated by the seeming inevitability that, if a gaming system comes out, someone is going to find a way to slap a QWERTY keyboard on it. More recent times have seen a rise in software or firmware based text input, and most of your modern consoles can handle text input via USB keyboard, but it’s the more unique hardware solutions for which I’m a sucker.

It all started, for me, back in the days of the original, brick-style Game Boy. A spread in issue 36 of Nintendo Power (Darkwing Duck cover feature, if you want to search your archives) covered a handful of productivity-oriented GB cartridges that were forthcoming; the InfoGenius series from GameTek, and FabTek’s (not related, by blood or by marriage) WorkBoy, which threw a tiny keyboard and a stand to prop up the system into the mix. WorkBoy featured many of the features that would later pop up in true PDAs, and still come with most smartphones, such as currency conversion, bank account tracking and balancing, calendar reference, and an address book. Reports vary as to how released or unreleased it was, but despite keeping my eye out for it in every Toys R Us, Kiddie City, or other purveyor of fine Nintendo goods I found myself in as a child, I never got my hands on a WorkBoy. Not like my mother would’ve bought it for me, anyway.

It wasn’t until the Dreamcast that I’d find another console keyboard to obsess over and use for all of one game. The Dreamcast Keyboard itself was nothing particularly fancy or tailored to complement the Dreamcast’s design motif, but it did allow Typing Of The Dead to happen. Easily the most ridiculous first-person, on-rails zombie slaying experience ever (save for Rock Of The Dead, but we don’t talk about that horrorshow), TotD took a couple of the guys from the House Of The Dead series, strapped Dreamcasts to their backs with keyboards attached, and set you loose in a house full of nightmares to clear out, like some hell-raising Mavis Beacon. Standard grunts would take one or two words to kill, while bosses often took longer sentences that were loosely strung together, almost like a story. Proof once again that, a console generation ago, adding zombies could still make anything better.

Not overly long after the Dreamcast (especially for me, since I waited until its demise to get one on the cheap), both the Gamecube and PlayStation 2 saw keyboard-compatible games spring up, in the forms of Phantasy Star Online: Episode I & II and Monster Hunter (at least, I think that’s what I got it for), and a couple of accessory companies rose to the occasion. While I never got far enough into the original Monster Hunter to make much use of it, I scored a Logitech PS2 NetPlay controller for dirt cheap, and still use the USB keyboard part (which detaches from the main controller body) on my PS3, thanks to its ridiculously long cord.

ASCII’s Gamecube keyboard/controller fusion, on the other hand, got plenty of use, even though I didn’t end up importing one until halfway through the lifespan of Episode I & II plus. In a game dominated by halting or racist quickchat macros, and imagechats sporting clumsily kludged-together Nazi symbolism, it was nice to have a way to communicate on the fly in a somewhat coherent manner. That, and you could use it in English or Japanese characters, which came in handy sometimes with players from both sides of the Pacific sharing some servers. I was fairly disappointed that the keyboard part wasn’t compatible with Animal Crossing, given my mindless devotion to that game requiring many a letter to be sent, but the controller bits are still controller bits in any game, so it’s a crowd-pleaser to still bust out for Mario Kart and Smash Bros. on the Wii.

The current generation’s frontrunners brought a welcome step forward in controller/keyboard integration, with the 360’s Chatpad and PS3’s Keypad add-ons. The rise of slide phones seems to have made the idea of a more compact keyboard more appealing, which kept both of these accessories from being ridiculously cumbersome and made them compatible with the existing controllers, which is a nice change from game keyboards past. While I’ve not had a chance to spend time with the PS3 keypad, and it frankly looks a bit off-putting, given its above-everything placement, the 360 Chatpad is a godsend. I’ve actually managed to become faster at typing with my thumbs than I am sending enough voice messages to get the same message across, and its form factor and placement stay well out of the way of anywhere that might interfere with gameplay. If the PS3 one is just as easy to use upon getting used to it, I may even ease back on my criticisms of the whole online pass system’s inconvenience.

As touchscreens and voice recognition (a la Kinect) become more and more prevalent and cost-effective, I worry that full-fledged (or even half-fledged) keyboards for consoles may become irrelevant, but even if they do get segued to a software-based, touch keypads, I hope developers continue finding ways to use them as more than just code, message, and username/password entry systems.