Over the years, the prestige surrounding “arcade stick” controllers has ballooned into something epic. Back in the days of the NES Advantage, stick controllers were made to help ease old-school gaming fans, who weren’t as comfortable with the NES “joypad,” into the new world of gaming. Like the Wii’s Classic Controller, these sticks were relatively cheap and easy to come by, and were made specifically for people who weren’t too keen on Nintendo’s latest innovation in game control.

It was only after Street Fighter II transformed the fighting game genre into a multi-million-dollar business that “fightsticks” came into being. Unlike the NES Advantage and its brethren, “fightsticks” are extremely expensive, highly scrutinized, frequently home-modified, and supremely cherished by those who value their power. Fightsticks, and the cult-ish devotion they garner, stand as a testament to the dedication a fighting game fan has developed to their chosen sport.

The latest stick to hit the market is from Mad Catz, and was made specifically for the Wii exclusive Tatusnoko vs. Capcom: Ultimate All-Stars, though it works with a lot of other non-motion-controlled retail games, as well as many Virtual Console titles.

Hit the jump and I’ll tell you what kind of fun I’ve had with this thing. 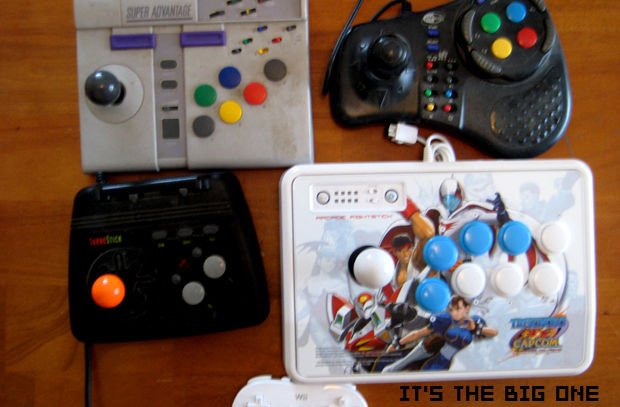 Have you played Tatsunoko vs. Capcom yet? If so, you’ll know that unlike the Street Fighter series, you really only need four buttons (light, medium, heavy, and assist) to play the game on expert levels. The Classic Controller is pretty much all you need for that. Having attacks mapped to shoulder buttons makes pulling off master combos in Street Fighter IV with the standard PS3/360 controllers feel unwieldy to many. That’s not a problem for Tatsunoko vs. Capcom. It also puts into question the need for a stick that gives equal access to all buttons. I didn’t find most button-only combos any easier to pull off with the FightStick.

That brings us to the “stick” part of the Tatsunoko vs. Capcom FightStick. It’s really nice, much easier to manage than the pads on the Classic Controller or the GameCube controller. “Shoryuken” motions are particularly more likely to come out. I’ve been playing Street Fighter games for almost 20 years, and I still have trouble pulling off a “Z-motion” move every once in a while. Not with the FightStick. I’ve been tossing out zombies in shopping carts with the greatest of ease, something necessary for anyone who wants to play competitively with Frank West.

I tried the stick out with a few more games, including Super Smash Bros. (the original), Super Smash Bros. Brawl, Samurai Shodown Collection, and Guilty Gear XX Accent Core. I wasn’t surprised by how much easier Samurai Shodown and Guilty Gear were to play, but I didn’t expect Smash Bros. to be this much easier. Taking the analog control out of the equation made double tapping much easier. I also had an easier time throwing and blocking, with those buttons now having equal access.

The stick is also surprisingly effective in making non-fighting games easier to play. The Wii-only sequel to NiGHTS was fun, but a little bit irritating to play with the notch-y analog sticks on the classic controller and the nunchuck. The game is a lot smoother with the FightStick, though you do lose the ability to do more subtle movements. It feels more like an arcade game, which may not mean much for people born after 1990, but it definitely works for me. 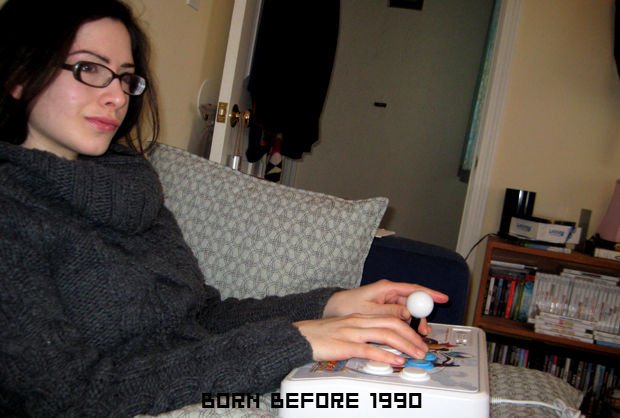 Aesthetically, the stick itself looks nice, if not a tad overgrown. This thing is huge, much larger than most of the old-school sticks I have in my possession. The art on the stick’s face is sharp, and doesn’t look like it will fade or smudge from excessive use and or sweat damage. The rest of the stick stays true to the Wii’s “blue and white” color theme. Everything here is blue or white. The stick even has glowing blue lights that signify which buttons are “Turbo” activated. It’s purely a looks-only thing, but it’s still pretty cool.

Speaking of “Turbo,” that’s the main thing about this stick that gives me a distinctive NES Advantage vibe. In addition to being able to switch the stick’s functionality to left analog stick, right analog stick, or control pad at any time, you can also power-up any of the game’s buttons to “turbo mode” at any time. This works great for games like Super Punch-Out!!, where high-speed button mashing can be the difference between success and failure.

The Wii Virtual Console is definitely where I’ll be using the Tatsunoko vs. Capcom FightStick the most, both for the turbo buttons, and the stick itself. Final Fight 3, the deepest (and most underrated) game in the series, makes good use of both Street Fighter-style controller moves and rapid-fire attacks. I had a hell of a time pulling off Guy’s super (which calls for a reverse hadouken motion after a grab) with the Classic Controller, but I can throw it out no problem with the Fightstick.

The proof that this stick is the real deal is the way it makes Fighting Street (the TurboGrafx-CD port of the original Street Fighter) actually playable. Out of all the Street Fighter games, Fighting Street is undeniably the most unforgiving when it comes to special move inputs. If you don’t do your hadouken or shoryuken motion at the exact right speed while pressing the button at the exact right time, you’re screwed. It’s nearly impossible to pull this off with a control pad, but with a stick, it can happen with enough practice. There is no way you’re getting to Sagat without a hadouken, and there’s no way you’re getting a hadouken out without a stick.

I haven’t tried to mod the stick yet, but I did open it up to take a look. It’s definitely harder to access the buttons from the inside than it is with Hori’s Wii-compatible fight stick. Hopefully I won’t need to replace any of the buttons anytime soon. They definitely feel better than the buttons on the Hori stick, though they are a bit noisy. If you play your fighters in a common area of your home, you may get some complaints from those you share a space with. Hit these buttons hard, and you’re going to get some pretty loud clicking. 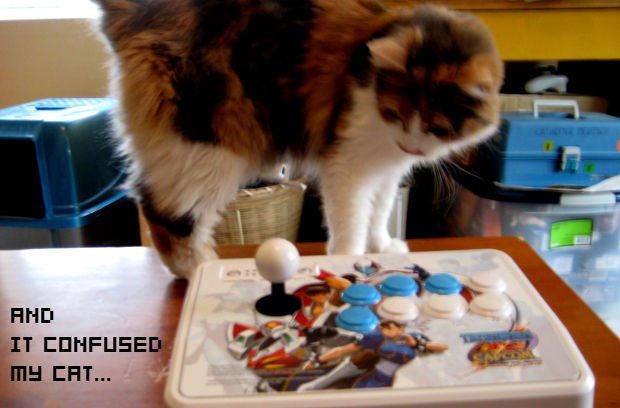 As a fan of older games and fighting games, the Tatsunoko vs. Capcom FightStick is a perfect fit. Like I said, I’ll be utilizing it with Virtual Console games more than with fighters, but that’s only if the Wii’s selection of 2D fighting games remains as limited as it is now. At $80, you better be sure that you’re going to get a lot of use out of this thing. It obviously wouldn’t be worth the money for someone who doesn’t play stick-friendly games more than a few hours a week. Still, it’s worth mentioning that this stick isn’t just for fighting game fans. Anyone with an appreciation for that old arcade feel, something that’s all but dead in modern gaming, will get some fun out of this controller.