To be perfectly honest, I never fully understood the appeal of massive, costly videogame controllers. How can someone justify spending so much on a gadget that only works with a few games? I wouldn’t have been able to answer that question a week ago, but I recently had a change of heart.

You see, I received a monstrous box in the mail not too long ago, and its contents showed me the error of my ways. The package contained a high-tech 3D mouse called the Novint Falcon, which we have talked about before here on Destructoid.

The device allows you to “feel” virtual objects and brings an unparalleled level of immersion to the games that support it. For instance, gliding your mouse cursor across a rock in one of the Falcon’s tech demos actually feels like your hand is touching the rock’s bumps. Seriously, it’s kind of freaky.

Keep reading to hear more about my experiences with the Novint Falcon, how the futuristic gizmo works, and whether or not you should get one for yourself. 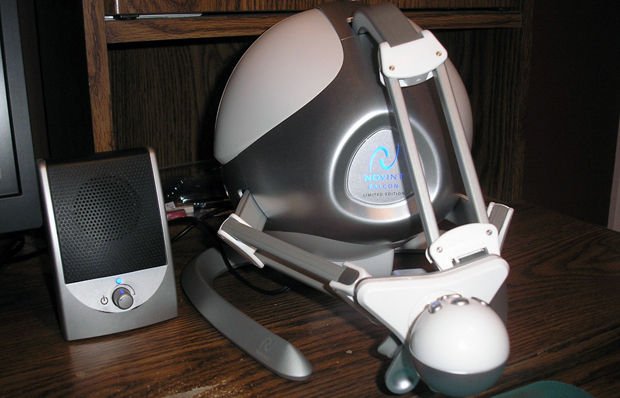 After reading up on the subject of simulated touch, I found out that the technology powering the Novint Falcon is also used to simulate real procedures for doctors. But this is a videogame blog, so forget I even mentioned it. Why talk about computer-generated scalpels when I could be explaining what it’s like to grope Portal‘s Companion Cube?

Like I mentioned before, the Novint Falcon comes in a very large box. Why? Because the Falcon itself is a pretty big controller. For the sake of comparison, this review includes an image of my cat sleeping next to the thing. Not only is the Falcon a rather bulky fellow, it also happens to be quite heavy too.

As soon as I put the device on my desk, however, I sort of stopped caring about that — the Falcon is sleek, sexy, and well-designed, which helps distract your attention away from realizing how much desk space the thing takes up. The end result is a controller that both looks and feels like it’s worth the rather high asking price.

So, how does the Novint Falcon work, exactly? Basically, the controller uses electrical motors to give off tactile feedback. You hold onto what looks like a robot’s hand, and then the controller will actually push against you to simulate what’s happening on-screen. For example, in a first-person shooter, you move the Falcon’s arms around to control your character’s gun exactly like how you would with a normal mouse. Also like a standard mouse, the ball at the end of the arms has buttons (four of them) which you use in conjunction with the keyboard to play.

Accurately describing what it’s like to feel inside of a virtual space is no easy feat, but I’ll try my best using specific examples. In Half-Life 2, when you pick up anything with the gravity gun, you instantly feel the Falcon working against you so that it’s harder for your arm to lift up on the device. As crazy as it sounds, you literally feel as if you just picked something up in real life. Likewise, when you set an object down, the extra pressure goes away, and there’s less strain on your hand when you move the device.

As you might expect, the same can be said for shooting guns. The Falcon simulates recoil by shoving its arms towards you in a burst of energy. Additionally, feedback can be experienced when you walk down stairs, climb ladders, land from a fall, get hurt, and almost everything else that might happen in a videogame when you aren’t standing still.

This, of course, provides a completely new and immersive experience even when playing familiar games again. While the Novint Falcon may not be as precise as a high-end gaming mouse for competitive play, it sure as hell makes games a lot more fun and engaging to play. For the average game player, it won’t matter, because once they get warmed up to the controller they won’t be able to notice the small difference in precision. 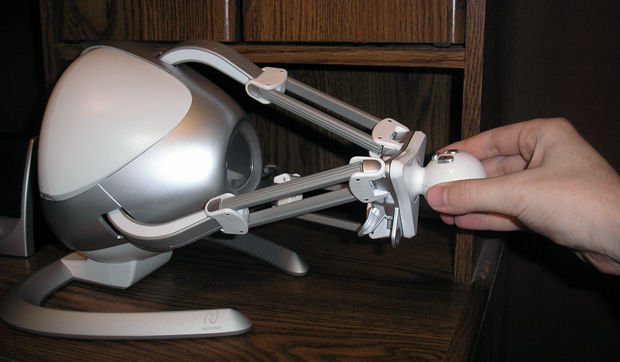 Setting up the Falcon took longer than I expected it to. The actual process of plugging in its USB cable and hefty power supply was quick and easy, but setting up the necessary software? Not so much. There’s a standard installer disc included with the controller, but Novint also packs in a DVD full of mini-games too.

These games serve as tech demos more than anything else, and aren’t particularly memorable. There’s stuff like air hockey, table tennis, a game where you launch ducks using a giant rubber band (okay, this one was a little memorable), and the list goes on. Some of them are worth trying once or twice when you are still new to the Novint Falcon, but that’s about it.

The fact that the N VeNT player — the hub program that allows you to access these games and more — is merely passable and not as polished as it should be doesn’t help the situation. Although it may seem like I wasn’t pleased with this aspect of the Falcon (and I wasn’t), at the end of the day, it doesn’t really matter. I don’t believe anyone, myself included, would ever buy the device for these throwaway games.

As a matter of fact, I along with my two younger siblings found the tutorial to be much more interesting. The software gives you a few spheres to play around with and each is composed of something different. There’s ice, a magnet, molasses, sandpaper, etc. — this was the first thing we tried when the Falcon was set up. Upon taking turns playing with the various spheres, we all started laughing in a “holy shit, this actually works … cool!” sort of way. 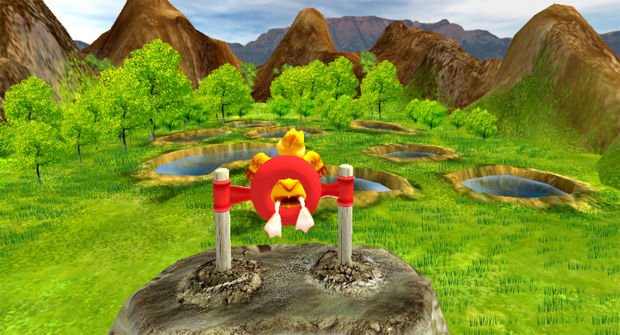 When the Novint Falcon first became available for people to buy, it was lacking one thing: compatible games. Depending on your taste in videogames, this isn’t a problem any more. There’s a list of supported titles here, but for the uninitiated, it’s mostly first-person shooters. It’s also worth noting that there are quite a few more games on the way.

If you buy the Pistol Grip Bundle, the Orange Box, among other games, is actually included in the cost. Or, if like me you get the Novint Falcon and the Pistol Grip attachment without any extra games, you can simply download free drivers for the games you already own.

And the Orange Box, which was my favorite “real” game to use the Falcon with, is even easier to configure than that — assuming you have the latest Steam updates, simply boot up Team Fortress 2 or whichever Valve game you want and then pull the Falcon’s arms towards you and push them back into place. After doing so, the Falcon will take over control of your mouse pointer and a new layer will be added to the in-game option menu allowing for the Falcon’s force feedback to be customized. 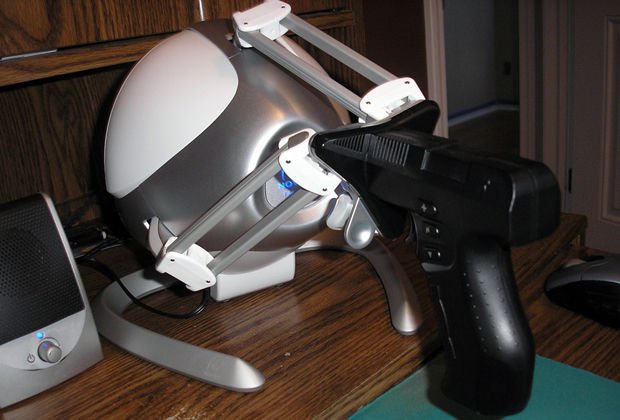 As for the Pistol Grip, an attachment that can be bundled with the Novint Falcon or purchased separately for $19.99, I cannot recommend it enough. The Pistol Grip is flat-out more comfortable to use than the standard ball grip, even when you’re playing non-FPS games. The attachment obviously has a working trigger, but there are also three easy-to-find buttons along its left side.

Besides looking like an actual gun which is cool in and of itself, there’s simply more of the Pistol Grip for you to grab than there is of the ball grip, making it a must-buy for anyone who already owns a Novint Falcon. The only issue I see arising with the swappable gun is that a left-handed person wouldn’t be able to hit the side buttons. 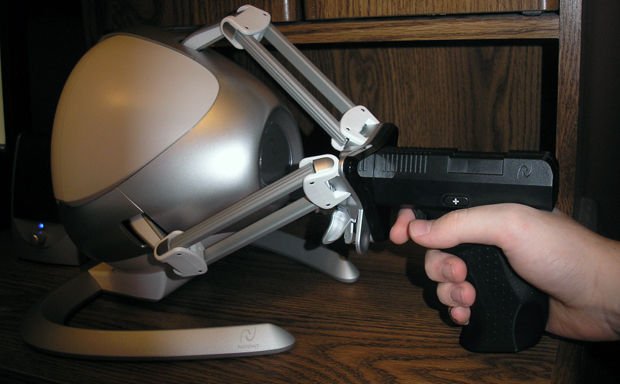 Whether or not the Falcon is worth purchasing really depends on how much you like or dislike its catalog of supported games. As far as AAA games go, I have only used the Falcon with Valve’s Orange Box collection, but quite frankly I found that to be more than enough for me.

It’s a shame Novint hasn’t put more Falcons in stores for people to try, because the device really does sell itself. I know I personally won’t ever be able to look at rumble and traditional force feedback the same way again.

Besides the issue with the number of compatible games, which I have mentioned a few times already, the only other qualm I have with the Falcon is that you can’t use it for an extended period of time like you can with a regular mouse. I suppose if you have an L-shaped desk, your arm would be able to easily rest, but it is definitely something to consider for potential buyers.

Still, the controller is so unlike anything I have ever used, I don’t mind having to keep my arm slightly raised up in order to play. The simple fact that replaying a game like Half-Life 2 for the umpteenth time was a fresh experience with the Novint Falcon, almost as if my Valve-related memories had been erased, speaks volumes.