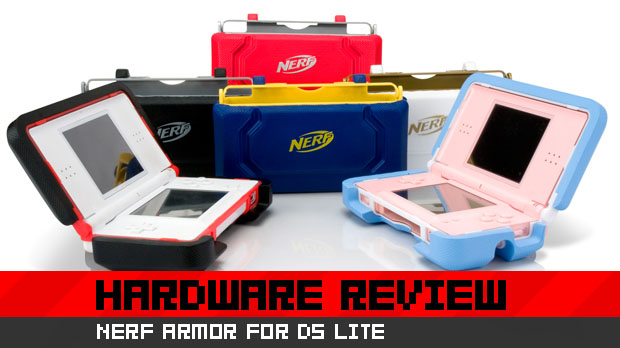 [Peripherally Speaking is a new series of reviews in which we take a look at hardware and peripherals designed to improve the gaming experience, from handheld accessories to home console enhancements.]

We all know the story with handheld gaming platforms. They look sleek, they look stylish, but they also look about as fragile as an eggshell in a nest of newspaper. Portable gaming systems inevitably suffer from scuffs, scratches and worse over time, which is why many companies have stepped in like chivalrous knights to provide a protective answer to our woes and, of course, cash in on our paranoia.

The first thing I noticed about the NERF Armor was how strongly it smelled of chemicals, which should appeal to all fans of solvent abuse right off the bat. The soft squidgy, yet unmistakably hard feel provides a good idea of what sharing a bed with Tim Curry might be like, which is also a bonus. However, prolonged contact with the rubbery surface of the Armor makes one’s hands feel rather slimy, like you’ve actually been sharing a bed with Jade Goody’s mum. Not so good.

The Armor is certainly robust and strong, with the cushioning protector able to withstand plenty of drops. There’s no denying that in terms of protection, the NERF Armor will definitely see the job done. The Armor is a little top heavy though, which makes the DS itself feel unwieldy to hold when playing on the go. The whole package will make your DS Lite feel much heavier and more cumbersome to play, so if you’ve always been attracted to the “Lite” part of the DS Lite, you might want to find a less intrusive protection method.

Speaking of intrusive, here’s the real problem with the NERF Armor — it is impossible to remove once you’ve put it on your DS. It clips on snugly around the DS but, like an overzealous girlfriend, won’t let go once it’s sunk its claws in. Attempting to “pop” the DS out of the armor led to the sponge-like coating ripping off of the plastic case, while trying to pull the plastic itself away caused me to accidentally start prying the DS Lite’s own plastic coating off of the machine.

I tried to push the DS Lite up through the opening in the hinge, but it was beginning the push the DS hinge back so far I feared it would snap my console in two. After an hour of trying to rescue my now thoroughly trapped DS, I resorted to attempting the prize the poor bastard out with a knife. Unfortunately, the knife slipped and now I have a crack in my DS, where the volume control rests. If I had not already upgraded to a DSi, I would be incredibly pissed off at this point, although this is still very annoying.

As you can see from the picture, I have so far managed to get half of the NERF Armor away from my DS Lite, as the casing snapped in two when I mounted one last heroic effort to free my poor machine. At the time of writing, the top half of the NERF Armor is still clinging like a retard’s handshake to my DS, and I’m too frightened of causing further damage to launch a second rescue attempt.

On a positive note, it’s fairly safe to say that the NERF Armor will definitely protect your DS, on the simple strength that it will NEVER come off without the fight of your life. It was believed that cockroaches would be the only thing to survive a nuclear holocaust. It would now appear that the cockroaches will have some company with these frigging things.

While some may love the fact that these Iron Maidens will attach themselves to a console until all of humanity is dead, my own  story carries with it the rather sad irony that, had I never encountered the NERF Armor, my DS Lite would not be damaged right now. Thanks to this product, I have a broken DS with half an armor casing stuck to it, and a sense of morose regret that I’ll carry to the grave.

If I were you, I’d definitely steer clear of this one unless you wish to have your DS Lite bonded to an exoskeleton until the end of days.