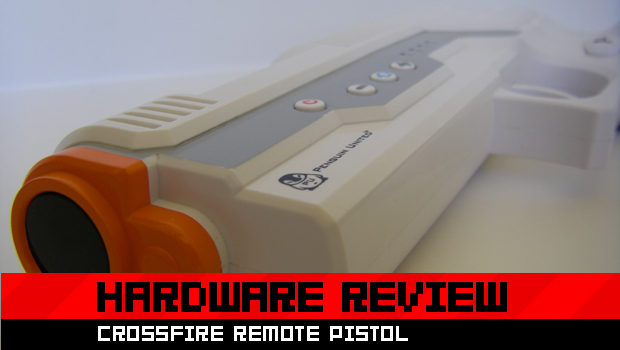 When it comes to Wii accessories, the vast majority of products are ones designed to work in conjunction with the Wii Remote. Just look at all of the assorted plastic bits of junk that you can slap a Remote into to turn the controller into “something else” — generally a superficial representation of another object with little advantage in gameplay.

Penguin United’s Crossfire Pistol actually is “something else,” however, as they have integrated the Remote itself into the gun. There’s no attaching “Tab A” into “Slot B” or any other sort of chicanery, just a self-contained gun accessory.

The Crossfire Remote Pistol is a pretty neat bit of design. One of the advantages of making an wholly new controller instead of an add-on is that you can position the buttons in the most advantageous area for the player. Penguin United has done just that, placing “A” buttons on either side of the gun’s grip to be pressed by the thumb while assigning the trigger as the “B” button.

The hammer has a D-Pad and the “1” and “2” buttons and can also be accessed easily. On the barrel, you can find the less frequently used buttons along the left side. The accessory port to plug in a Nunchuk is at the butt of the gun, making any accessory swap-out quick. Unfortunately, this gun does not support the Wii MotionPlus accessory.

This was also built with adults in mind. It has an extra-long grip which is easy for anyone to get their hands around. The controller’s batteries are inserted into the grip, giving a nice counterbalance of weight off the front of the gun, making it light and comfortable enough for hours of use.

It feels excellent in my small, but adult hands. Not at all flimsy like some peripherals tend to be, this has both weight and a feel of density to it. All of the buttons and — perhaps most importantly — the trigger respond with a satisfying click when used, giving a useful bit of feedback to the player.

Typically, it has been my experience that you can fudge a little bit on the distance that you sit back from the TV when using a Wii remote. In my home, the television is only about six feet from the couch, which works out fine for most applications. The Crossfire pistol had some difficulty remaining accurate at this distance and the cursor would jump wildly around the screen. Moving to a distance of eight feet cleared up any problems but people who have small spaces to work with may want to keep that in mind when considering this accessory.

That said, this is easily the best gun peripheral I’ve ever used on the Wii. It’s extremely comfortable to hold, looks good and does everything it’s supposed to do. If you’re in the market for a gun controller, the Crossfire Remote Pistol comes highly recommended.