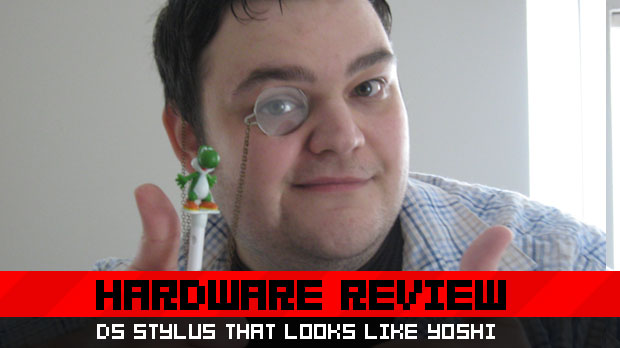 [Peripherally Speaking is a new series of reviews in which we take a look at hardware and peripherals designed to improve the gaming experience, from handheld accessories to home console enhancements.]

Third party peripherals will always find a way to get some extra mileage out of a product, and they are to be praised for coming up with some ingenious ways of selling unnecessary stuff to people. Some of their ideas are cool and genuinely inventive, some of them are not so excellent. Then we have this — DS styluses that are made to look a bit like videogame characters.

Yes, we have in our possession a stylus that has Yoshi on top of it, and because we are such dedicated reviewers, you damn right we’re going to do a review of it, and in more detail than can ever be warranted. Come with us as we review a DS stylus that looks like Yoshi!

The first thing you’ll notice with the DS stylus that looks like Yoshi is that this DS stylus looks like Yoshi. Standing atop the head, or “crown” of the stylus is a realistic likeness of the popular Nintendo star, who has been rendered in three dimensions for a depth and believability yet unseen in other things that look like Yoshi. The soft plastic used to sculpt this character is green as a base color, with other details hand painted with all the skill and expertise of a Kinder Egg toy.

The paint job certainly does the trick and definitely makes Yoshi look like the dinosaur we all love. That said, putting the stylus under more scrutiny than anyone else ever will, we noticed that the paint job was a little sloppy in places, with a few bits of white creeping onto areas that should be green. Once we noticed this, we became traumatized, but then we got over it.

Yoshi himself strikes a pose that looks as if he’s attempting to flash us. Just put a dirty brown overcoat on him and he’d look no different than my Uncle Jasper in the park. This perversion aside, the gleeful look on Yoshi’s face is endearing and we love him for it. This is pure Yoshi, through and through, and Yoshi fans will definitely be able to look at this Yoshi stylus and say, “That DS stylus looks quite a bit like Yoshi.”

So, we know that the stylus looks like Yoshi — but how does it work out as a gaming tool? Well, we took it to the test!

When picking up the stylus for the first time, you may notice a subtle size difference between it and regular DS styluses. It’s difficult to tell, but you soon realize that the Yoshi stylus is larger. It’s too large to actually fit inside your DS’ stylus hole, so be warned that you’ll need to acquire some sort of protective stylus carrying case. We suggest purchasing an Aurora Diamante fountain pen, throwing the pen away, and using its box to safely store the stylus.

Despite its size, the DS stylus that looks like Yoshi is surprisingly light, like an osteogenesis imperfecta sufferer’s femur. I decided the try the stylus out on what has now become known as the “Crash Test DS,” which still has half a NERF Armor grafted onto it from the last review. The stylus was used in conjunction with Henry Hatsworth in the Puzzling Adventure, a game that not only features heavy stylus use, but also requires the player switch between both the face buttons and the touch screen controls, which helped to give an idea of how easy it is to transition between the two with this DS stylus, the one that looks like Yoshi.

Results are generally positive! While the size of the stylus is indeed cumbersome, one gets used to it quite fast and those with huge, ape-like hands might actually prefer a meatier stick to waggle between their hairy fingers. I’ve often found with games that require both traditional and touch-screen input that it was difficult to hold the stylus while using the face buttons. Shockingly, it wasn’t really that awkward to hold the DS stylus that looks like Yoshi, and transitioning between buttons and touch-screen worked generally well. The stylus is as accurate as any other, and a cursory look over the touch screen seems to indicate a scratch-free surface.