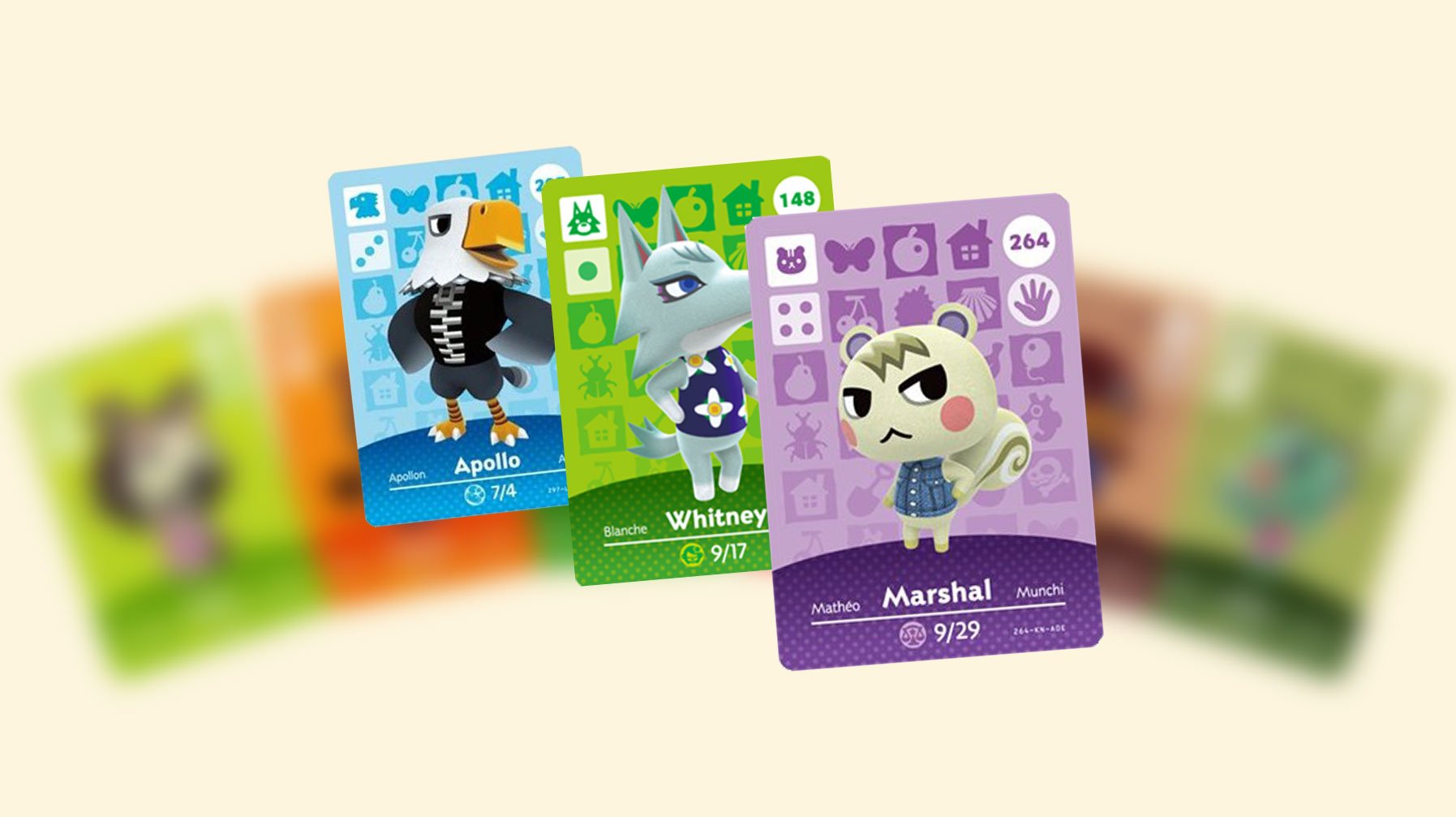 My grandpa’s deck has no weak cards!

Later, Animal Crossing: New Leaf was updated with amiibo support, allowing RV-riding villagers into your town. Nintendo eventually released four different series of amiibo cards, featuring hundreds of villagers. Outside of those two games, the cards also worked with Animal Crossing: amiibo Festival, which few people played. For many years, you could pick up a pack of cards on Amazon or eBay for relatively cheap. But now that we’re all playing Animal Crossing: New Horizons, they’re are making a comeback in a big way.

In New Horizons, not only can you invite specific villagers to your island’s campsite using their amiibo cards, you can take that opportunity to invite them to move in as well. Now that more people are playing Animal Crossing on the Switch and sharing their experience on social media, it’s leading to a lot of characters getting a new following compared to Animal Crossing in the past.

It’s hard to find new packs now with the COVID-19 pandemic shutting down non-essential businesses and the newness of New Horizons spreading current print cards thin, but you’ll have no trouble finding listings for individual cards. Most can be purchased for a “reasonable” price between $5-$15. However, there are some characters sellers on eBay think are worth so much money, you’ll need to structure a payment plan to afford them.

Tom is an example of a villager with a fairly likable personality and design who fetches an absurd yet comparatively modest price. Tom specifically is a cranky-type villager, which is a disposition that acts like an old man compared to other villager types. While he doesn’t have an arguably universal appeal design, Tom and other characters found around his price range also have the advantage of being present in most of the Animal Crossing series. Other villagers you can find at roughly this price range include Olivia, a snooty white cat, and Fang, a classically designed cranky wolf. Generally, the villagers hanging around this price range look like animals, more or less.

I was a little surprised anyone would price Pietro over $5 since an overwhelming number of people will hate him solely based on a phobia of clowns or perhaps simply because Pietro is such a garishly colored sheep, but I have seen a few people on Twitter hoping he’d move into their town to brighten up their day, so who am I to judge? At least he’s not a mime like Marcel, with whom I, unfortunately, share a name with. But once you cross over the $70 mark, you start to see villager popularity and demand in terms of how much wilder it can get compared to just watching Beastars on Netflix, only without the human-shaped hands they give to the anthropomorphized characters. I mean, Louis is hot but something about a deer with no hooves and human hands is still unsettling.

Octopi are a fairly new animal category, being introduced in the last main line game of New Leaf. Octavius is the only other octopus in the category but I couldn’t find any listings for him. While Octavius is a cranky-type, Zucker and Marina are nicer personality types with their own hooks. Marina has a sort of minimalist, Hello-Kitty-kind-of-design appeal going on for her, while Zucker is paradoxically made to look like the food he’s destined to one day become, a takoyaki. Being the only ones of their kind, they also have the distinction of rarity going for their price inflation.

Other animals around this price tend to either be new to the series as well like Fauna the deer, or absolute cutie pies that have also been around the series a while, like Lolly and Kyle. Coco also goes for $90 due to her peculiar design as a rabbit that looks like the series’ strange gyroids.

Now we’re treading into the territory of extremely unique designs and other distinguished animals. You may recognize Bob as the purple cat doing the smug dance from A Hat in Time, and while that alone may have propelled Bob into the $100 club, it certainly helps that he has the smug-looking expression to fit the meme he was shoved into. Lucky and Ankha’s designs transcend the limitations of being just animals and are more like a mummy or pharaoh than an animal villager. $100 is a lot for a card but then again, you’d be getting either a stressed-looking pharaoh cat or the smug-dancing cat for your village.

I admittedly don’t see the appeal of Apollo. He’s just an eagle. Then again, he is an eagle, the national bird of the United States. At the very least, I wish his default outfit wasn’t the zipper shirt, probably the least American outfit I can think of. At this point in the list, you may find similar listings at cheaper prices, but that doesn’t discount the fact that someone thinks somebody will buy Apollo at $200. At least shipping and handling for this particular card are free. But you know what they say, freedom isn’t free, and this case it’s a least two Benjamins.

Wolves are noble canines with wide appeal as relatives of dogs, social creatures who live in packs and howl at the moon like rad edgelords. Whitney benefits from being the white wolf that is commonly loved in media. But she’s specifically here on this spot of the list because you can still find other listings for her at dramatically lower prices. Yes, $300 for a single card is a wild price but like a lot of the other entries on this list, it’s possible to find them at lower, more sane prices. No, the absolute top of the list belongs to a character that I consistently see at a premium regardless of the seller. Someone who is also beloved on social media from whoever gets to meet him.

To be fair, this particular listing of Marshal is actually $295. But just look at him? The pure white fur, the simple tuft of hair on his forehead, those blushing cheeks, and a denim jacket as his default shirt along with a smug personality that tends to spout confident lines that most people wish they could do in public. Marshal tends to top a lot of list for dreamies, a term Animal Crossing fans use for villagers they’d love to move into their towns. Other characters that tend to share this distinction include Julian, a unicorn, and the more recently added Raymond, a business-like cat with heterochromia who gathered a meme-like gathering for the aforementioned qualities and the array of anecdotal situations players have gotten him in, such as wearing a maid outfit and sitting in a gifted cat bed.

The wild, wild marketplace for Animal Crossing amiibo cards can be unpredictable, but for purists looking to keep a dollar value out of the game, I’ve only more recently discovered how Nook Miles Tickets, an item you receive for 2,000 Nook Miles at Resident Services, are used as currency for a variety of high value objects. Players who have villagers packing up to move can broadcast they have a moving villager across mediums like Twitter or Discord, then invite a buyer onto their island who will then invite said villager to their island. A transaction like that I’ve found can range anywhere between 10 to 20 Nook Miles Tickets, or more depending on the villager.

Did you get any Animal Crossing amiibo cards back when they were plentiful or are you largely indifferent to the idea of amiibo in general? Or do you think you could spend your Nook Miles to buy a villager from someone willing, given it was a villager who appeals to you? If you have a few cards, who do you have? Let me know in the comments below along with any tips if you know a guy who knows Gruff, the cranky green billy goat. I’m sitting on 20k Nook Miles and my cash limit is $10.