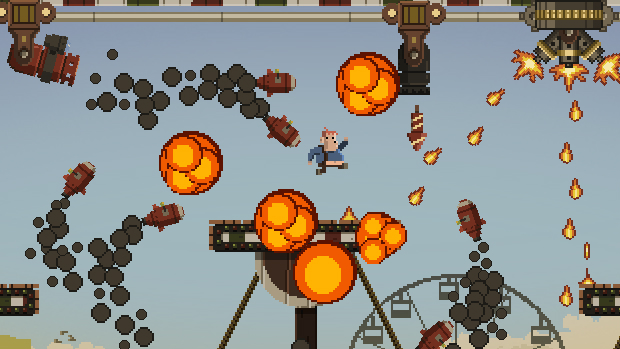 Though arcade-style action games seemed to disappear with arcades themselves (go figure), they have been making a bit of a comeback recently. Games like Super Crate Box or the upcoming Woah Dave! remind us that sometimes it is okay to just want to go for the high score. Penarium looks like it might be joining the ranks of coin-grabbing score-focused death simulators.

Willy, the protagonist in Penarium‘s deadly circus, is trying to collect as many barrels as he can, while avoiding environmental traps. What sets it apart is that there are several different traps available, and they cycle semi-randomly after every five barrels.

Though it is being developed by indie studio Self Made Miracle, Penarium is being published by Team17, which is best known for the Worms series.