But it’s not a launch day title

We learned the sad news this week that PopCap’s Peggle 2 won’t make launch day. But it’s still “launch window” and it’s still awesome in the way that only Peggle should be, so I wanted to share with you my thoughts on the near-final version I played last week. 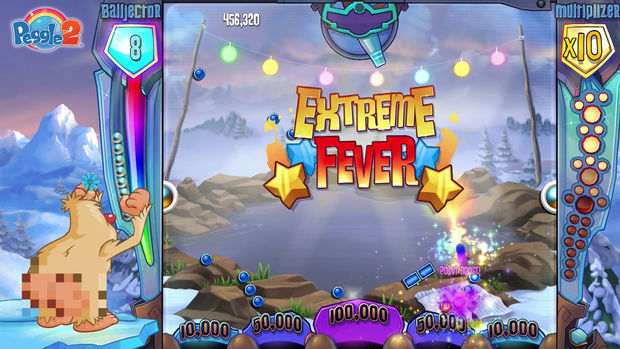 We’ve already told you that it’s like crack. Nothing has changed in that respect, though I did have fun checking out some of the newly revealed power-ups for Peggle 2.

I saw stage Winter Blunderland, where Master Jeffrey let us play with his Bowlder power. Once this shot is enabled, you get a huge boulder of a bowling ball to shoot across the stage, replacing your little metal ball for a turn. It mows down anything it touches, though it’s not necessarily a straight shot. I was surprised to see that even a projectile of this size can change direction depending on what it hits. Still, a well-timed shot will clear the game board up nicely.

Master Berg freezes the gameboard, which has your pegs sliding around like hockey pucks. Your shot should be in an effort to cause a sliding chain reaction, like a car pileup on a frozen highway. Your reward? Well, Berg, a yeti,  twerks with his bare bottom when the going gets tough.

And you wonder why I can’t wait for this puzzle game to be released.