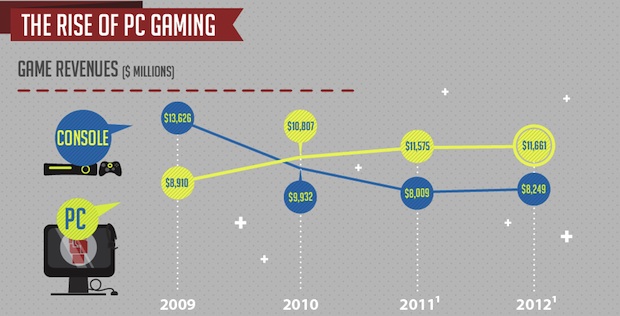 Woah. I thought it was just me. Just two days ago I settled in on a nice new PC gaming rig and started dumping all the games I’ve missed these past few years as a console-only gamer on it. I used to be PC-only waaaaay back in the day, so coming back felt good. It felt good, man.

It also feels good to see the information in Ignite Game Technologies’ infographic. It says that PC gaming is making a strong comeback; it already pulls down larger revenues than console gaming. The infographic goes way beyond bragging about dollars, though. It goes into so much detail that even the haters might learn something from it.

Here’s some of the pro-PC gaming goodies I’ve pulled from it:

Better GPUs, better selection…the list goes on. There’s also info on the future of PC gaming pointing to gamers’ platform preferences. It seems they want to say that PC’s top-selling games could beat out console’s top sellers, but I don’t think we’re quite there yet.

One thing’s for sure: Consoles come and go. They push the envelope, glow brilliantly and then die. They do their part for gaming, keeping innovation alive. PC, on the other hand, will always be there, ever reliable. I think they both play their part in a well-rounded gamer’s diet.

See the full infographic after the jump.