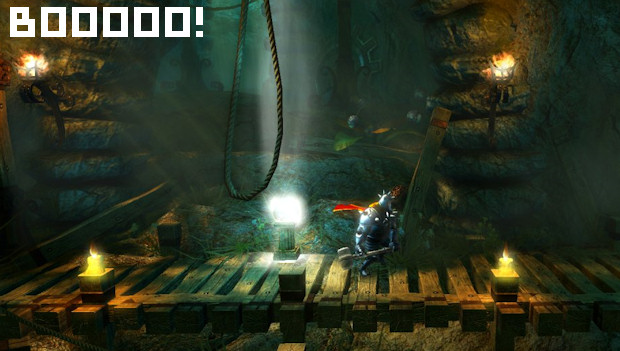 In a weird turn of events, platform puzzler Trine will costs twice as much on PC as it will on PSN, costing $40 instead of $20. Bizarrely, developer Frozenbyte had no clue about the price difference, yet is still defending the decision to price one version considerably more than the other.

“Trine is far from a game created by a solo hero developer (we have over 20 employees and Trine has contributions from a double amount of people),” explains one dev on the company’s forums. “We are very confident that we can deliver a full retail experience with Trine (hence PC version is sold in retail also for approx 35 to 40 eur/usd!).

“As for the PSN price, our publisher and Sony sets it. Heck, even I don’t know it … I just don’t find it fair to compare us to games which have started at similar or higher pricepoints. It’s very obvious Trine will eventually cost less, so I guess I just wanted to say that if the price hurts more than waiting, then that’s the option.”

As well as the $40 retail version, Trine is currently available for pre-order on Steam for $30. The boxed copy is due to ship some time this Summer, while the downloadable version should be available between July 3 and July 10. Somehow I can’t see this move proving popular with PC gamers.

[Update: Southpeak sent us an email to say that the official price point for the PC version of Trine is $29.99. The publisher hasn’t said much about the game since it was named as a publisher, but that is their official stance on the story.]