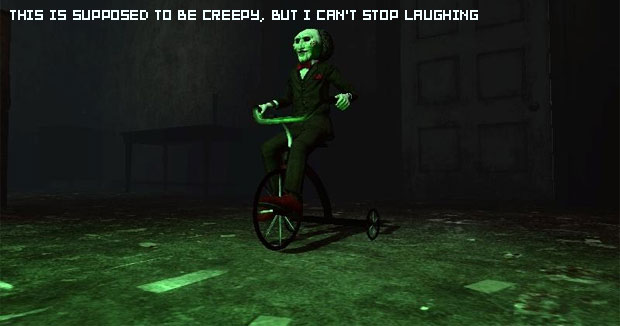 Sorry, but ever since I saw this ancient video, I’ve never been able to look at Jigsaw’s little puppet guy with a straight face. This screenshot from the Saw videogame is not an exception.

Those craving for some hot dipping-your-hand-in-syringe-filled-toilets action on the PC are going to have to look to Steam, as it’ll be the only place to get Saw in North America. Sorry to disappoint, but there won’t be a retail PC version of the game. Soul-crushing news, I know.

As reported by Big Download, Steam says Saw will be out this month, supposedly. You had better get moving if that’s still the goal, Zombie Studios. Horror games must make it out before Halloween. It’s the law.