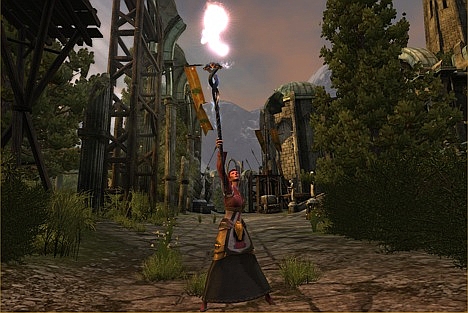 The PC version of BioWare’s Dragon Age: Origins has been delayed from early to “late 2009.” The reason for the shift is a bit unclear, but it’s suggested that it may have occurred to allow the keyboard version to ship simultaneously with the console iterations.

The delay isn’t because the name sucked and needed an emergency change, which is what I thought when I had my girlfriend read the bad news to me earlier today. If I were to play a name association game with the word “RPG,” “dragon” would spill out of my mouth quicker than spicy food moves through a colon. I’m tired of lazy names. Imagine if Bungie named Halo: Combat Evolved something dumb like Dude in Armor: Assault Rifle and Aliens. It probably wouldn’t have had the same impact, mainly because I wouldn’t have bought it.

Because PR people like to assuage fears, I thought I would include the bad news press release. Holder of titles and evil defeater Doctor Ray Muzyka chimed in on the matter to make sure that I didn’t think something was afoot with the game. Check it out after the break.

New Release Date Set for Last Half of 2009

Edmonton, Alberta, Canada (February 3, 2009) – Leading video game developer BioWare™, a division of Electronic Arts Inc. (NASDAQ: ERTS), today announced that the release of Dragon Age™: Origins on PC has been rescheduled to the last half of 2009 from the previously announced early 2009 release date, coinciding with the release of the console versions of Dragon Age: Origins.

“Dragon Age: Origins is shaping up to be quite amazing in its level of quality and polish,” said Dr. Ray Muzyka, General Manager and CEO, BioWare and General Manager and Vice President, EA.  “I’m really proud of our team, who are working very hard to make Dragon Age: Origins the biggest and most exciting BioWare game yet, and we will work to ensure it not only meets, but exceeds the expectations of our loyal audience of fans.”

Dragon Age: Origins is the spiritual successor to BioWare’s critically acclaimed Baldur’s Gate™, featuring deep character customization and roleplaying, morally challenging decisions, tactical party-based combat, and a wealth of gritty, mature sub-plots that together make it one of the most highly-anticipated PC and console releases of 2009.