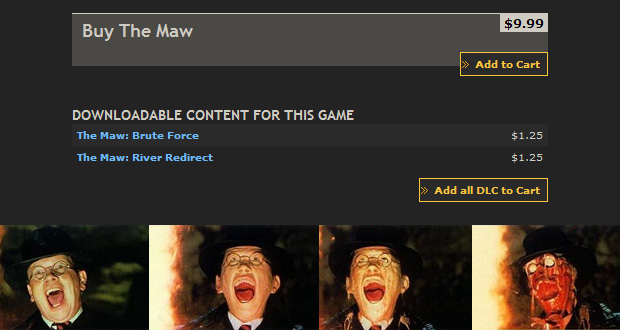 With downloadable content being the money maker it is these days, it’s no wonder Valve has jumped on board and decided to offer paid DLC on its digital distribution platform, Steam. While in-game content post launch for PC games has historically been free, it was only a matter of time. Money talks, y’know?

The first title to support premium DLC on Steam is none other than indie favorite The Maw. Two levels, Brute Force and River Redirect, can be downloaded at $1.25 a pop. Yep, the content costs the same amount on the Xbox LIVE Marketplace.

No, this concept isn’t entirely new — look at Games for Windows LIVE for example — but Steam is the premier platform for many PC gamers, and this announcement could mark the beginning of something bad for consumers.

Perhaps I’m being overly dramatic here, but don’t be too shocked when you start seeing paid DLC pop up all over the place on Steam. I’m just sayin’.

March 16, 2009 – Valve, creators of best-selling entertainment products and advanced technologies, today announced the arrival of in-game downloadable content to Steam, their massively popular PC gaming platform. In-game DLC allows developers and publishers to use their own games as a platform for selling additional content to gamers.

The first game to take advantage of this new in-game DLC capability is The Maw, by Twisted Pixel Games. Their first DLC releases are levels entitled The Maw: Brute Force and The Maw: River Redirect. Each DLC level expands The Maw storyline by fitting in-between the original levels as “deleted scenes.”

DLC can now be added to any game on Steam, regardless of whether it was originally purchased via Steam, at retail, or via other digital outlets. It is also a feature of Steamworks, the suite of free tools and services available to game developers and publishers.

For more information about The Maw or Steam, please visit www.steamgames.com.