The Witcher is an interesting series on PC. The first game was a PC experience through and through: you could pause the action at any time and movement was mapped to mouse clicks. The second was way more action-oriented in order to better work with a controller for its new console iterations. Not a terrible change, all things considered, but the console emphasis was plain and simple, especially when compared to the first game.

In fact, most people who have followed CD Projekt RED would probably say something like “Why would you need a PC Port Report? Isn’t PC the primary platform?” to which I would reply “No, seemingly not anymore.”

Here we are with The Witcher 3: Wild Hunt.

[Note: Screenshots and video used in this post are taken from my experience with the game.] 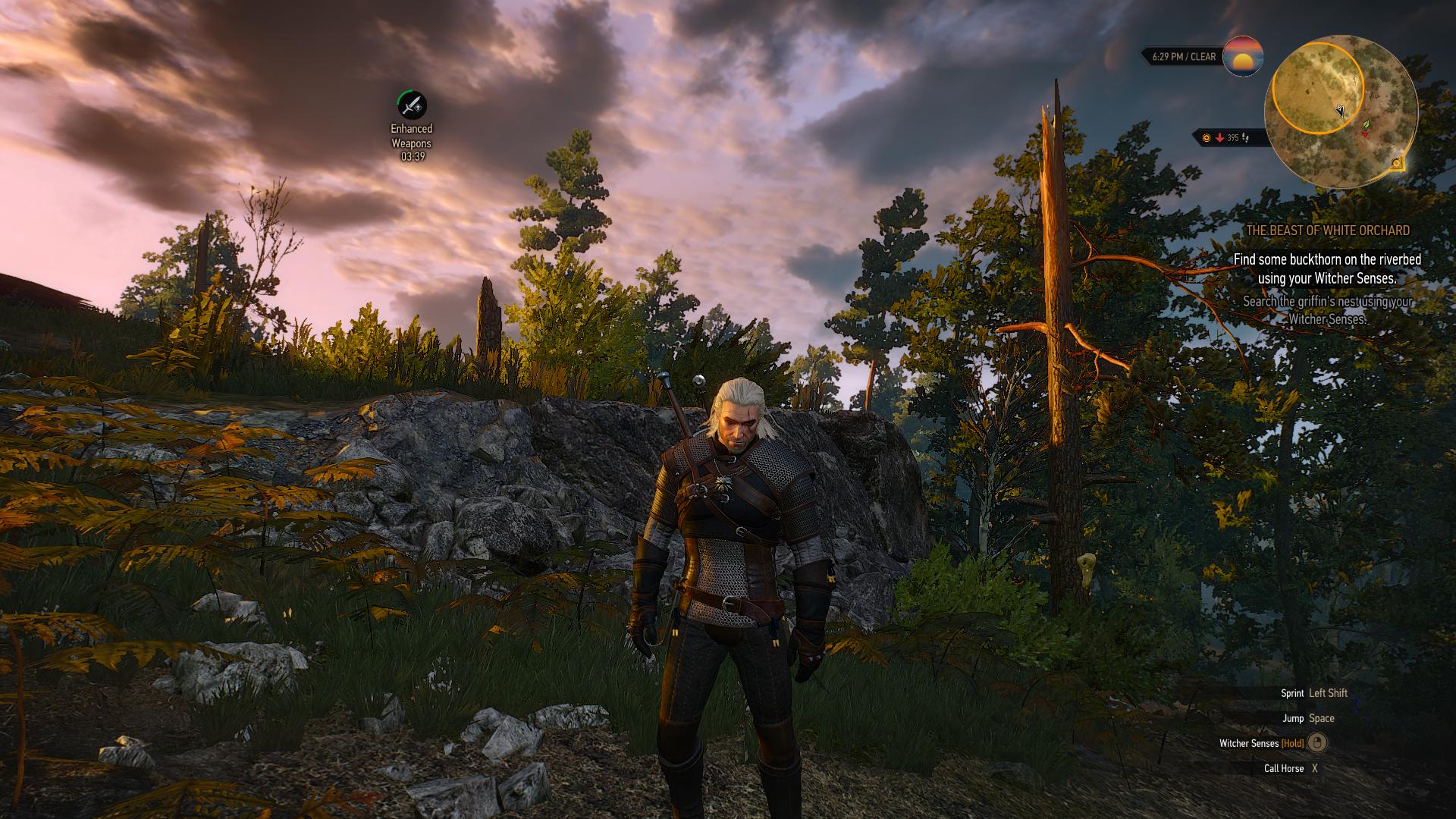 I’d be remiss if I didn’t address the now-infamous trailer of the game that incorrectly showed what it would look like back in 2013. The developers have since downgraded what the game can do, and have addressed the issue. There are lots of elements to this and it isn’t as simple as “downgraded because consoles” or “they couldn’t afford it,” but the end result is still the same.

Regardless of that trailer, The Witcher 3 still looks phenomenal.

In order to achieve 60 frames per second with my setup at 1080p, I needed to play with the settings a bit. Most things were kept at the Ultra settings, except for the foliage and shadows, which were turned down to High. The game stays consistently above 60 FPS for me now, even during combat and most in-game cutscenes. Some cutscenes are evidently capped at 30 FPS, which is offputting and incredibly noticeable.

The biggest setting to turn off in order to achieve a good framerate is HairWorks. With HairWorks on, hair does looks absolutely stunning and is perhaps the best rendering of hair I’ve ever come across, though up close it’s still a bit funky looking. There are three options for HairWorks: on, Geralt-only, and off. If fully on, even the monsters and Geralt’s horse will have HairWorks-quality hair. However, even when I had this on “Geralt only,” the framerate would fluctuate between 30 and 50 at any given moment. Yes, the hair looks great, but it is not worth the huge dip in framerate.

Another option to be aware of is the “Hardware Mouse.” It’s located under Options in the Video section for some reason, and anyone playing with a keyboard and mouse is likely going to want to turn this option on. Doing so disables mouse acceleration, essentially making the mouse “feel” like it is supposed to. Many of the .ini files located in the installation folder can also be edited to further customize many of the options.

There’s some strange odds and ends in the options to take note of. To turn on unlimited FPS, the FPS slider needs to be all the way to the left. The middle option is 30 FPS, and the right option is 60. For those playing on a big television screen via Big Picture Mode or something similar, be aware that the font size is rather small, and the HUD size does not get any bigger, only smaller. In fact, there’s only two sizes for HUD size: Large and Small.

Controlling Geralt with a keyboard and mouse is somewhat clunky. Turning is awkward and slow, and managing to interact with a specific object or NPC can be a struggle. Combat on a mouse and keyboard feels fluid, at least. Controlling Geralt with a controller simply feels better, all things considered. It’s not that controlling him with a keyboard and mouse is awful, but there’s an unfortunate feeling of “this just isn’t right.”

Switching to a controller input is as simple as hitting any button on a connected controller. As soon as the game detects a controller input, everything is switched to controller prompts and the game immediately recognizes it. The same goes with switching back to the keyboard. The responsiveness of switching is fantastic, and future PC game designers better take note.

The keyboard keys can be remapped, except for movement. The WASD keys are set in stone. When using a controller, all of the buttons are locked in at the default assignments; there is no remapping of any of the buttons. 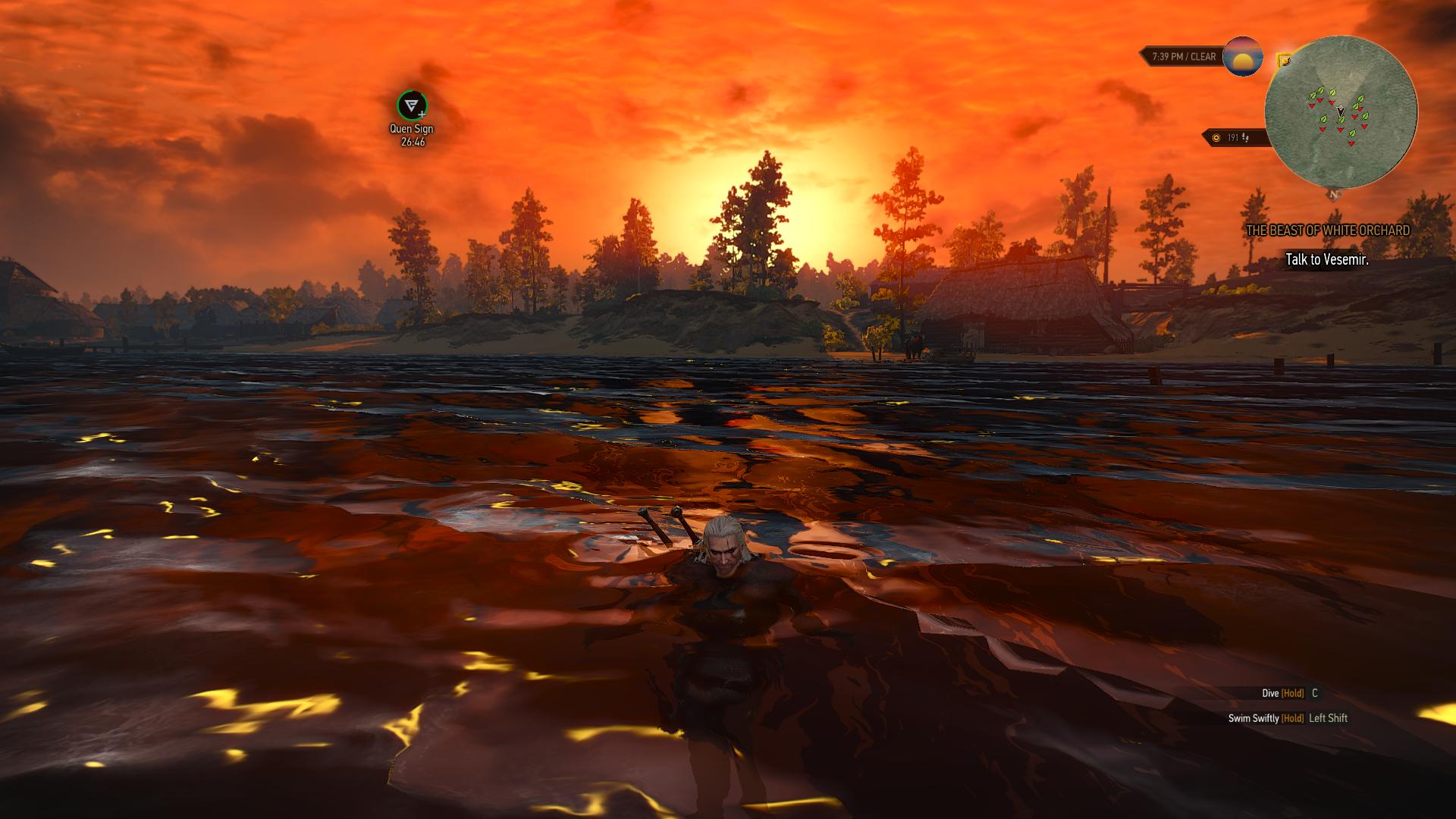 Since the PC release, there has already been a couple of large patches to help improve performance and fix bugs. CD Projekt RED has always put a lot of focus on the PC community, and that certainly still seems to be the case with The Witcher 3. More patches are on the way, and despite the console-esque nature of the third iteration, I would not expect the game to be neglected on PC going forward. It’s also important to note that, apparently, it is coming to SteamOS/Linux. There was a banner on Steam saying as much, but CD Projekt RED has not commented on the Linux situation. Currently, the game is only available for Windows.

Some users have been reporting crashes on their systems, but I have yet to encounter a single one. Mods are still in their infancy, but they are there. Mostly small game tweaks at the moment, but the toolkit is evidently on its way. It took a couple of years to get the official modding toolkit out for The Witcher 2, but it has been promised to come out sooner for the latest installment. Plain and simple, The Witcher 3: Wild Hunt is a great PC port. Whether or not it should have ever been a “port” in the first place is a separate discussion, but what’s presented here to the consumer is thoroughly enjoyable.

Oh. and you can skip all the splash screens when booting up. 10/10, would port again.