The original Spelunky, now known as Spelunky Classic, was a freeware PC title, but it was XBLA players that got the refined, enhanced version that most of us now think of when the game is mentioned. Left out in the cold, the PC Master Race wept openly, but those dark days are now behind us.

Spelunky is available on Steam, and the good news is that it’s just as wonderful as the XBLA version, if not slightly better with the added Daily Challenges. You really have no reason not to don your fedora (this is one of the few occasions where it won’t make you look like a twat), grab some rope, and delve into punishing underground realms filled with treasure and pugs. 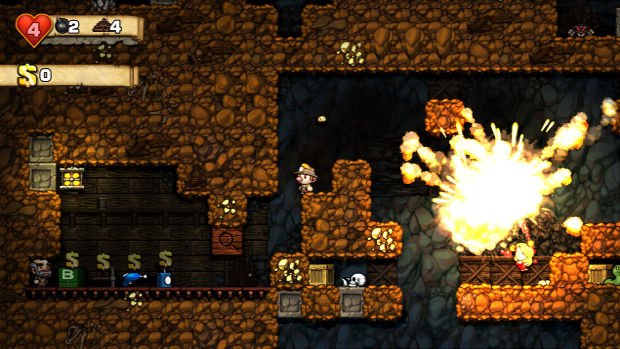 If, for some inexplicable reason, you don’t have a clue what Spelunky is, then allow me to get you up to speed. Spelunky is part of the new wave of not-quite-roguelikes-but-certainly-difficult games that a plethora of indie developers have been churning out for the last couple of years. It has the classic roguelike tropes of permadeath, lots of one-hit kills, devious traps, and randomly generated levels, but it also owes a lot to Metroidvania-style games, with its focus on platforming and side-on exploration.

Like a diminutive Indiana Jones, you’ll traverse these deadly, underground levels in search of loot, gaudy golden idols, and damsels in distress — of the male, female, and canine variety — but there’s only really one key goal: don’t bloody die. If you do succumb to an early death, you’ll start right back at the beginning with only your (hopefully) increased skill to potentially make the next run more successful. 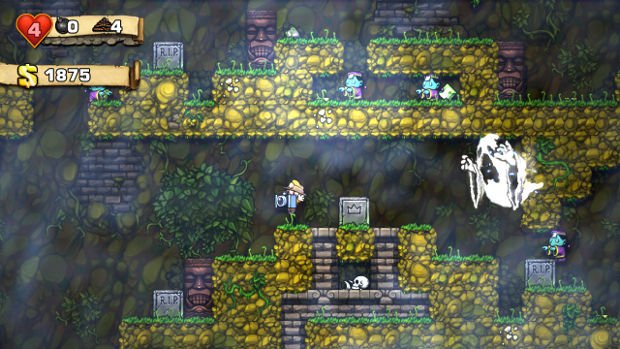 I find myself pretty bored of the soundtrack, and the art design, while cute, does very little for me — but it’s the hunt for gold and the desperate scramble to the inviting, gaping exit that keeps me coming back for more. Spelunky is the sort of game that inspires gamers to tell stories filled with close-calls and and embarrassing deaths, or to share hints and tips so that others might not fall foul of arrow traps or yeti attacks.

If I’d written this a couple of days ago, I would be lamenting the fact that, despite how long its taken to port this over to PC, there’s a dearth of options for a platform that’s all about customizing one’s experience. Limited resolution options relegated those with a non-traditional setup to playing Spelunky in a resolution other than their screen’s native one, but this oversight has thankfully been fixed. Feel free to play in any sort of configuration you want to.

There are only two control options: gamepad (I just used my PS3 controller) or keyboard. The mouse doesn’t get a look in beyond navigating the menus. I would have loved to see the mouse used to aim bombs, rocks, and ropes, but no such luck. My keyboard is getting a bit long in the tooth, and without the mouse it just feels a bit imprecise compared to my PS3 controller. 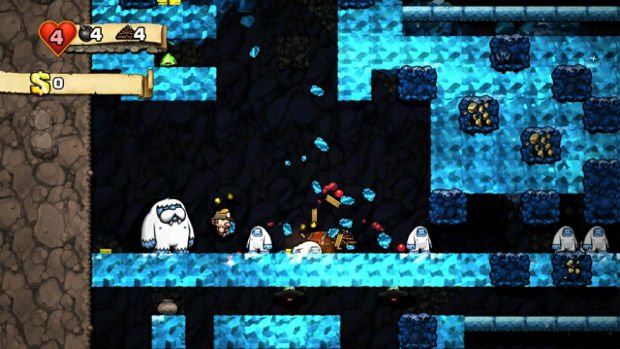 The one addition to Spelunky that elevates this new version beyond a mere port is the Daily Challenge mode. Every day, a new random map is generated for mass consumption, so you can finally compare your spelunking skills with pals. This new, competitive bonus feels right at home in a game that already has a deathmatch mode, and leaderboards will ensure that you feel suitably ashamed when you’re at the bottom of your friends list.

There’re already a great many videos of folk attempting to master these challenges, so players can see first hand how others fared. It’s going a long way to fostering a sense of community, as shared experiences have a tendency to do.

Daily Challenges and finally being able to enjoy Spelunky at 60+ frames per second instead of the original 30 makes this port the best way to experience the game, but there’s not a whole lot of reasons to download it if you’ve already got the Xbox Live Arcade version. For those without it, however, you owe it to yourself to pick it up immediately.