At first glance, Nitroplus Blasterz could be mistaken for one of those elaborate fan-made fantasy fight videos, cobbled together out of stolen sprites and the Mugen fighting engine. This bizarre collection of anime heroines from dozens of different sources has them whipping around impossibly fast, using all of their signature moves (or what you might assume are their signature moves if, like me, you only recognize a handful out of the cast of characters) in a glorious display of “who would win in a fight” frivolity.

Only, it’s not some pre-rendered movie. Someone actually made this. They stitched together all of these wildly different characters and placed them in a fighter that allows them to move and fight each other as seamlessly as they would in their own anime. Kyle was quite taken with it when it came out for consoles last February. Despite not having a ton of nostalgia or reverence for most of the cast, he found a fighting game that could stand on its own merits. So how does the PC version stack up?

Well, it’s damn near identical as far as I can tell. 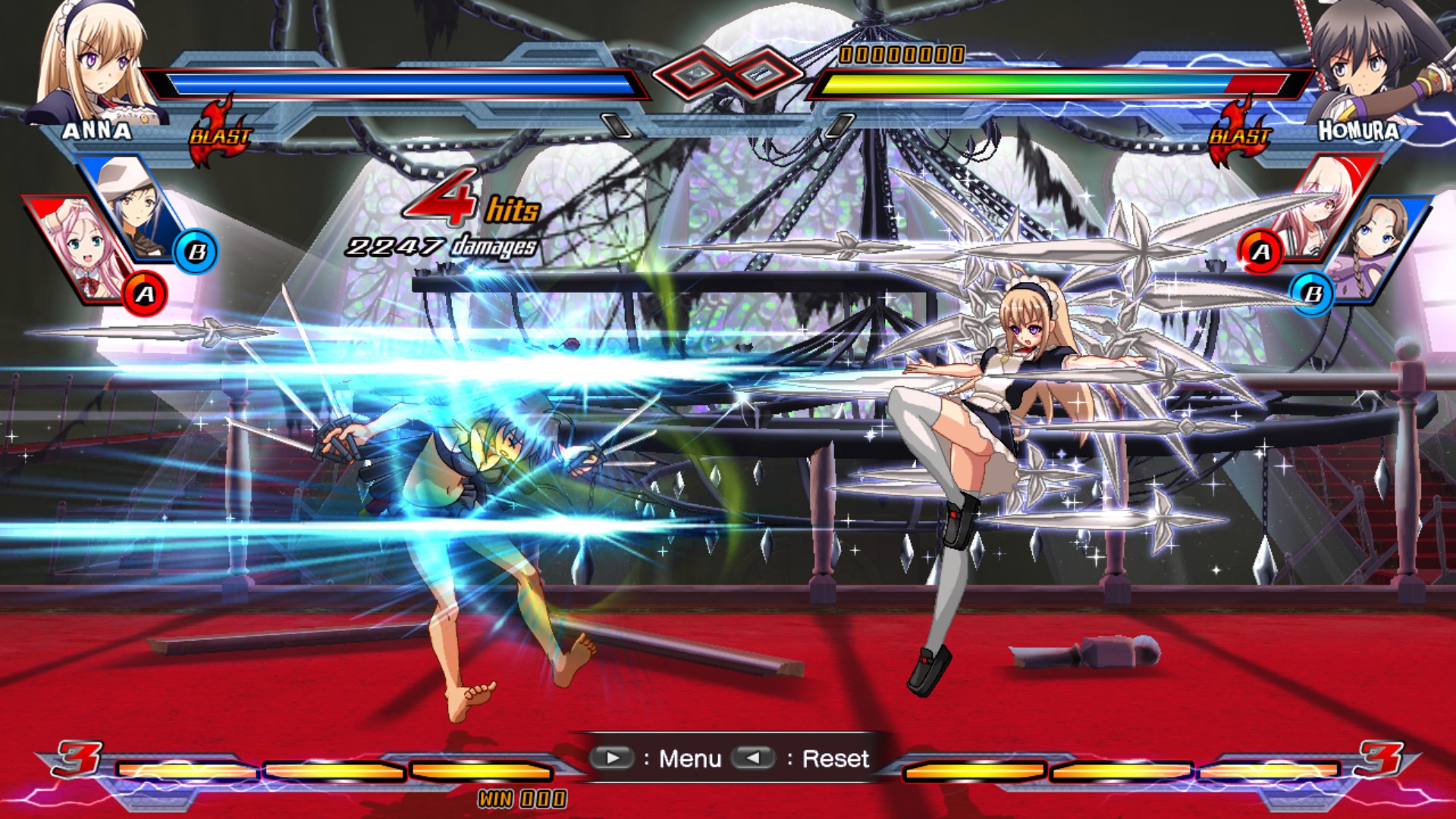 As a 2D fighter featuring fairly simple graphics, it should be no surprise that the PC version of Nitroplus Blasterz runs like a dream. Load times are short and frame rate drops are non-existent. That said, it’s not like there are a ton of added options or bells and whistles either. Aside from choosing between windowed and full screen, your resolution, and V-sync (which made no describable difference to me), there are no other options. Anyone hoping for added graphical features like a gimmicky CRT filter will be disappointed.

Gameplay-wise, Nitroplus Blasterz is the same great anime-fighter its always been. With 14 playable characters and 18 wacky assists that can be called on for everything from aerial bombardments in a mech, to simply clubbing someone with a baseball bat, there is tons of variety to be found. The action is as fast and frenetic as you’d expect from a game in the genre, with super long combo chains and flashy super moves aplenty. Actually performing these feats however is refreshingly attainable. While you’ll still need to sink plenty of time into (the incredibly bare-bones) training mode to perform the most dazzling displays of anime-on-anime violence possible, simply getting to a competent level of play doesn’t take too long. Unlike games like Guilty Gear or BlazBlue where it feels like you need to take an extension course before even hopping into the game, Nitroplus Blasterz is up-front with its tools and systems and makes jumping into the fray a fairly painless experience.

As with all fighters, the keyboard controls added for the PC version are a joke. I’ve never played a fighting game that felt completely at home on the PC (although Rising Thunder came close) and Nitroplus is no exception. But c’mon, it’s not like anyone who is going to be interested in an indie anime-fighter featuring characters from a dozen different obscure sources isn’t going to have a proper fightstick or pad ready for the job.

The online experience follows the trend of providing the player with what they need while skipping past the useless chaff and ephemera that tends to clutter up a modern fighter. There are the typical options for ranked matches and player matches depending on how hardcore you feel like taking things, but few other distractions. Aside from the core fighting modes, there is a fairly reserved system for designing a player card (not quite the thousands of options you might see in something like Mortal Kombat X or Persona 4 Arena), a simple replay theater, and your personal statistics to peruse. Refreshingly simple.

Ranked matches are entered into on a double-blind system similar to Street Fighter V. You pick your character and assists before even searching for a match, presumably to avoid scummy counter-picking shenanigans. My only gripe with this system is that it’s text-based, so if you don’t know the name of your favorite assists you just have to guess. But then again, what are you doing in ranked mode if you don’t even know the name of your assists, right? I mean, you’d have to be pretty terrible at the game to do that *nervous flopsweat drips down my forehead*

The options and features for finding the perfect ranked match are surprisingly robust, but shackled by grim reality. Theoretically, you can tailor your search for players of equal or greater skill level, with a certain quality of connection, in your region, and so on. Functionally though, I ended up setting most of these parameters to “any” in order to find a match without growing old and frail at my computer desk waiting for a mythical perfect match to come my way. On the bright side, Nitroplus does feature the option to mess around in the training mode while you wait for a match, so you’re not just starring at a blank screen for minutes on end if you choose to be picky. 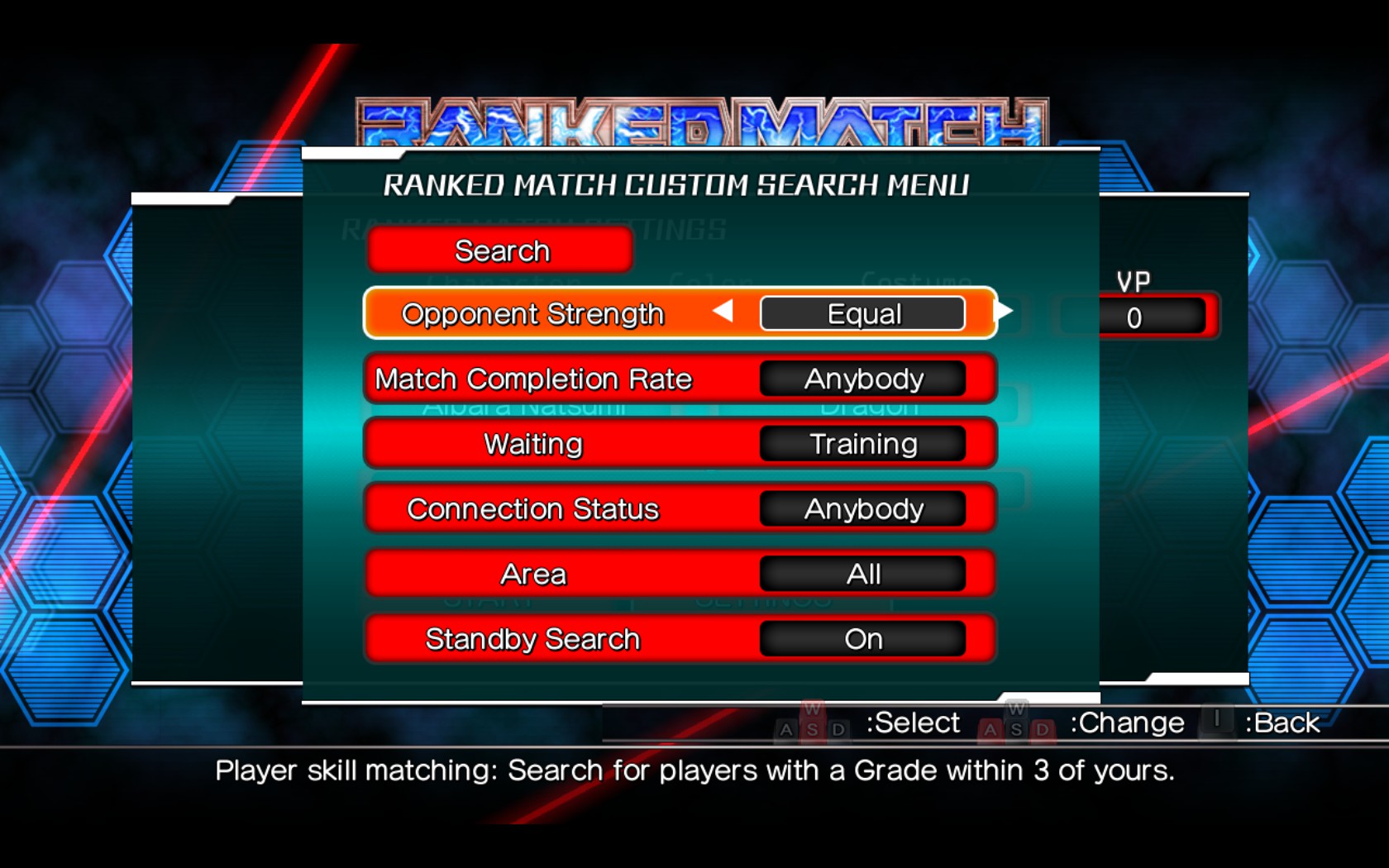 My online battles ran the gamut of respectably smooth to unplayably laggy. To be fair, I knew most of my bad matches were going to be gong shows going in, the pre-match ping meter seems fairly accurate at giving you a heads up of how the connection is going to feel. But, that brings me to the main problem I encountered playing online — you can’t afford to be choosy.

While not much more than a week out from release, the playerbase already feels a little thin. Waiting around for the ideal match isn’t an option when the population just isn’t there to make it happen. If you want to play a game within a reasonable amount of time, you have to lower your standards and take what you can get, even if it results in a sub-par experience. While no one can tell what the future holds, the low player count this close to release is not a great sign for the game’s long-term viability.

The PC port includes all the previous DLC characters and additional win poses and stages from the console versions. That said, Nitroplus Blasterz still seems a little rough around the edges. Basic things you might have expected to be finally addressed in this re-release still persist, like the absence of English subtitles for all the (fairly long-winded) pre-fight banter. Unless you speak Japanese, you’ll never know what has these anime girls so worked up. The training mode is still as minimal as it gets as well, offering nothing other than a dummy and damage info to guide your efforts. If you’ve been spoiled by fighting games serving up frame data and complex combo tutorials on a platter, it is going to seem a little anemic. 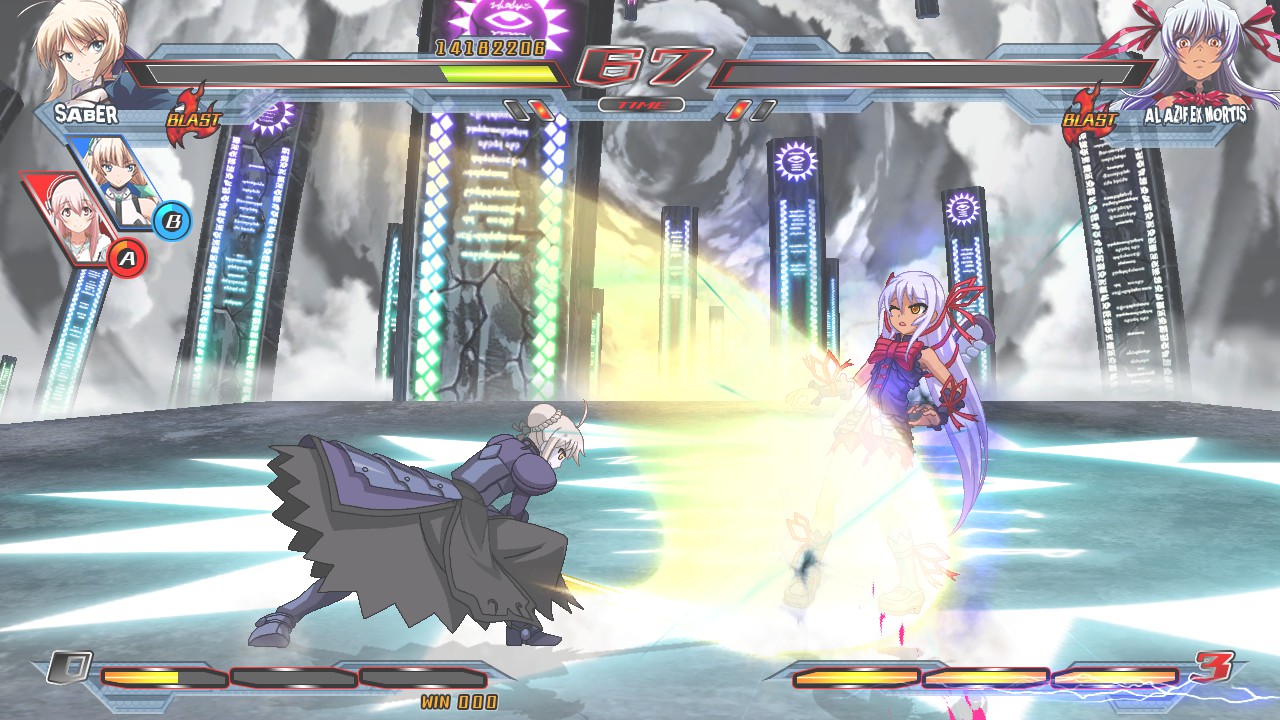 Petty complaints aside, Nitroplus Blasterz on PC is still the compelling, fun, and easy-to-get-into fighting game its always been. Whether you love the characters, or are just looking for a fun fast-paced fighter to get into, Nitroplus has got you covered. But, if you want to play, do it now. I wouldn’t place bets on there being enough of a playerbase around to find a match six months from now.