Joe Danger and Joe Danger 2: The Movie are such great games. I played the crap out of both of them on the consoles, and am still really happy that they have arrived on PC as well. Some new features have been added, including an Ultra Hard mode and new playable characters such as Mr. Minecraft (otherwise known as Steve) and the Team Fortress 2 gang. It was already hilarious when Joe D. was taken out by hitting his head on things, but seeing a Heavy being flattened is a whole new level of greatness!

While it is always great to see a game on as many platforms as possible, just know this before diving into the Joe Danger series: these titles were built for the controller, and playing them any other way is just plain silly. 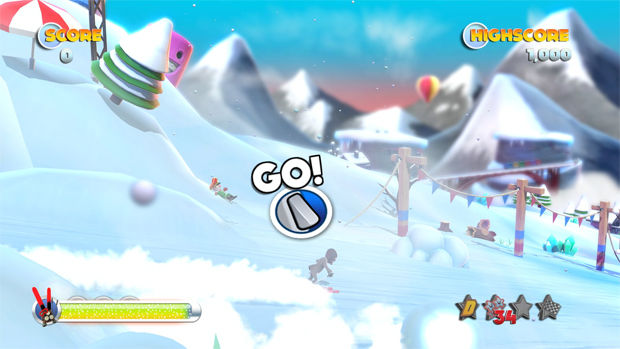 I’ve always thought playing Joe Danger was like elegantly dancing around the buttons of the controller, performing tricks and avoiding obstacles with grace. Doing well in a level feels so natural and yet so complicated that you can’t help but feel a strong sense of accomplishment. On a keyboard, however, it’s a bit different. Trying to constantly balance the bike while doing tricks and worrying about boosting is incredibly difficult to pull off, even once the keys are memorized. Maybe if a player only knew the keyboard controls they could eventually wrap their head around them, but it’s far from ideal either way.

Another issue for keyboard players is that all of the in-game prompts use the Xbox controller buttons. It’s important to memorize the buttons before playing, since it will show the Xbox gamepad’s X button to jump but you’ll need to press whatever you have mapped to jump on the keyboard. The keyboard controls are completely customizable, though, so no worries there.

The options menu for graphics and keybindings are in a pre-game launcher outside of the game. There are options for post-processing, window size, shadows, and anti-aliasing, which provide a decent amount of customizability when it comes to graphics. When set to high, the graphics really do look amazing — even better than its console brethren for sure. During my playtime, I never noticed the framerate stutter during gameplay and everything was very smooth. 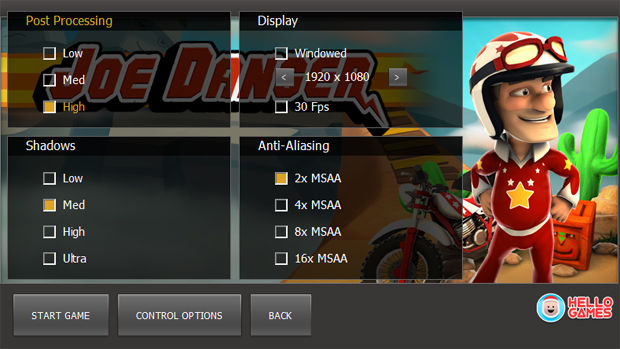 The first thing I did when booting up the games was check out the “Ultra Hard” mode, which is new to the PC versions. Let’s just say that the mode lives up to its name, and it’s balls-to-the-walls hard. I consider myself to be pretty good at Joe Danger, and I never leave a level until I complete all of the objectives with a 100% combo. That being said, the Ultra Hard mode will occupy me for quite some time, at least until it crushes my confidence.

What it really boils down to, then, is a controller. If you have one for your PC, you can’t go wrong with Joe Danger and/or Joe Danger: The Movie. Both are great games that will provide plenty of entertainment for anyone, even if you’ve previously bought and completed the games. The extra skins and playable content make the PC versions of the Joe Danger games the best versions available; just be sure to enjoy them responsibly, with a controller.