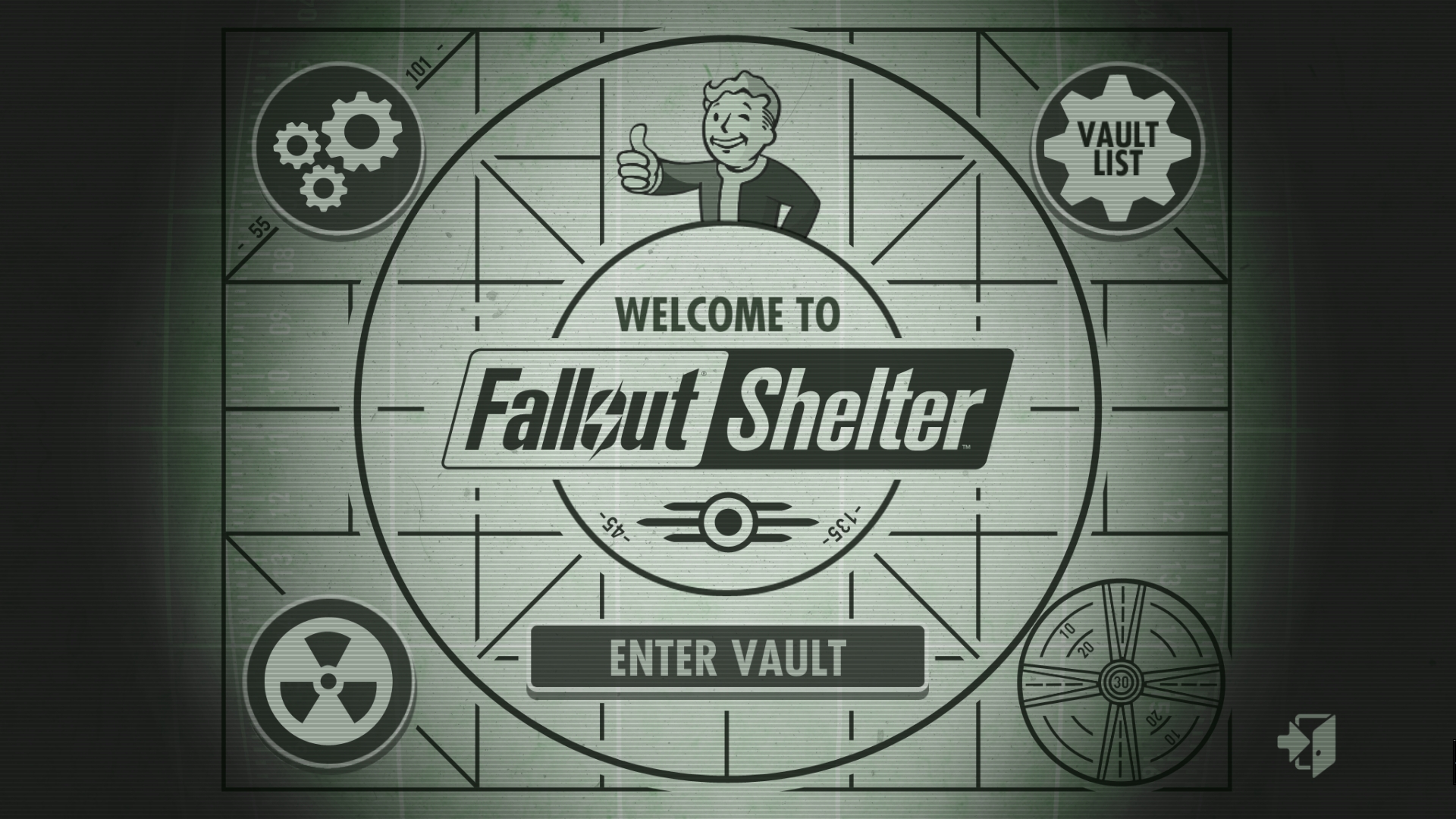 Any Vault in a Radstorm

Fallout Shelter made a bit of a splash last year when Bethesda announced – and released the game live on stage at the company’s E3 event.

As it came out some months ahead of Fallout 4, quite a few people, yours truly included, downloaded the mobile app in search of some solid Fallout feels. Chris reviewed the game then, and while it isn’t that much different now that it’s on PC, a few new features make it worth considering. 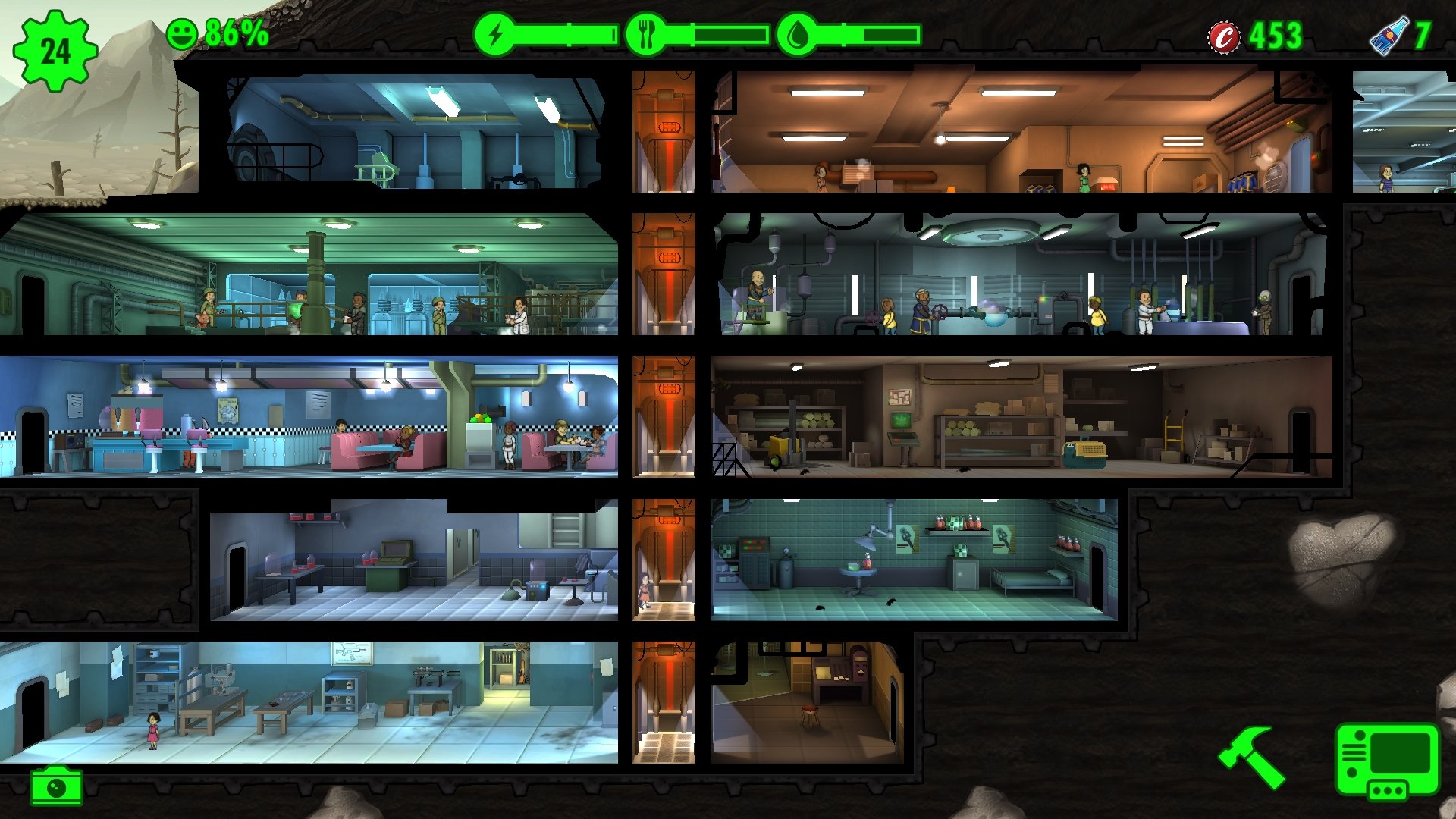 It’s worth pointing out that as a broad-market mobile app, most PCs will be able to run the game handily, with no loss of framerate or dips in performance. Its system requirements are similarly modest:

The main wrinkle is that the game is for now exclusive to the Bethesda.net launcher program, just like Fallout 4‘s Creation Kit modding program is. You’ll have to launch the game from that client to avail of the store and cloud services, so players uninterested in yet another storefront may want to stick with the mobile version.

As befitting such a simple title, Fallout Shelter is lean on options, with simple volume and interface zoom sliders, as well as the option to play the game in windowed mode. It’s worth noting here that “windowed mode” for this game is a teeny-tiny cellphone-sized window on a 1080p monitor, whereas the non-windowed mode is actually what’s better known as “borderless fullscreen”. Smartly, both display modes allow easy tabbing out, since the design of the game isn’t very conducive to long stretches of play. 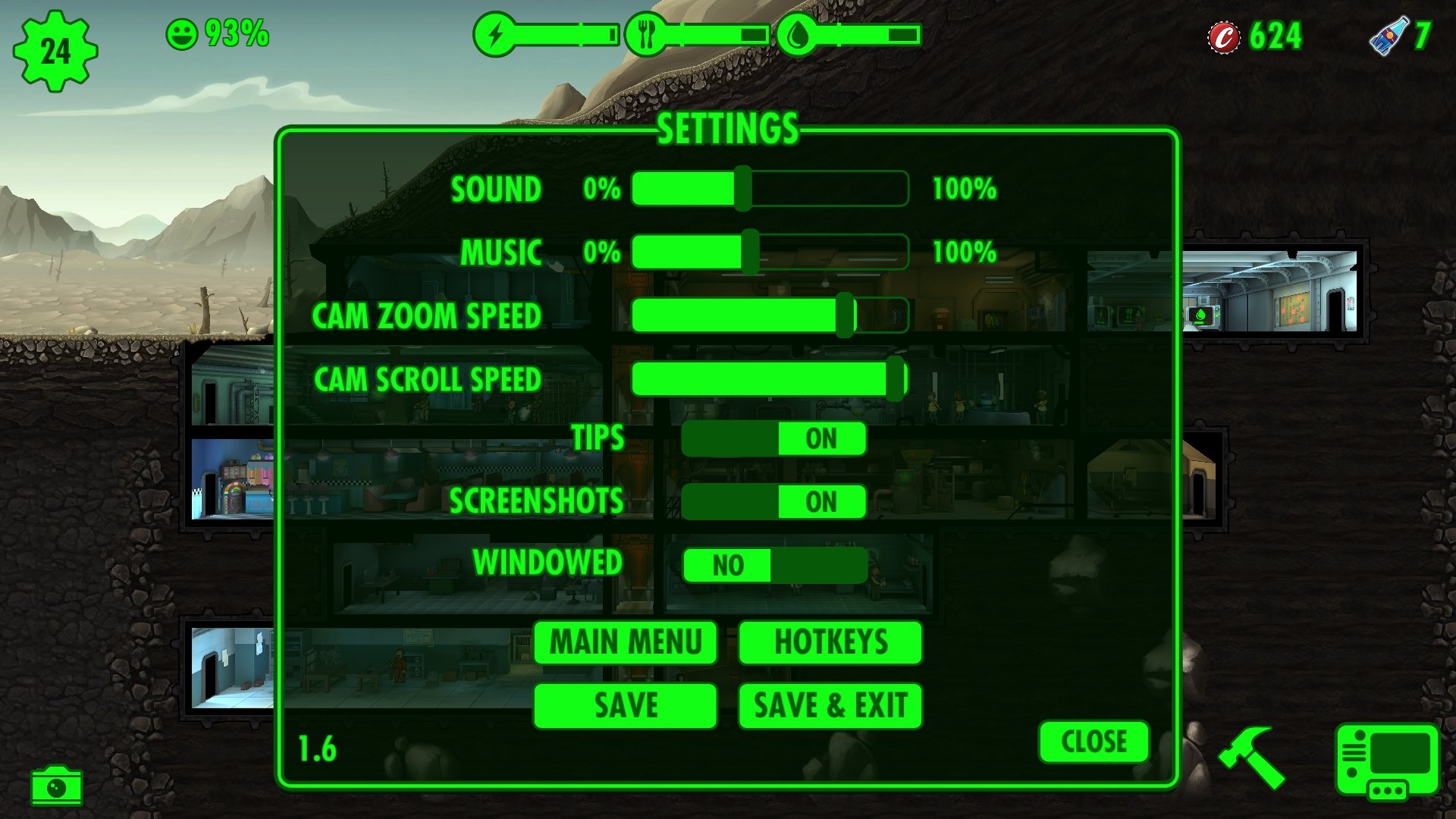 The one thing it doesn’t do, however, is send alerts or notifications, meaning players will have to check back on their vaults manually.

Content-wise, Fallout Shelter has received two new major features that make it a more engaging experience. The quest system allows players to send teams of dwellers to explore locations, fight baddies, find loot, and even advance small storylines. All one needs is to unlock the system is build the new “Overseer’s Office” room, after which they’ll be able to send up to three of their dwellers on a range of quests. The assigned dwellers will then leave the vault, and a timer will count down until they reach their destination. Upon arriving, they’ll have to do the quest (usually involving clearing a small dungeon), and spend some more time walking back to the vault, loot and experience in hand.

Between daily quests and some light story-driven quest chains, the quest system gives Fallout Shelter the “endgame” it never had, finally making it feel like it has something approaching a genuine goal. 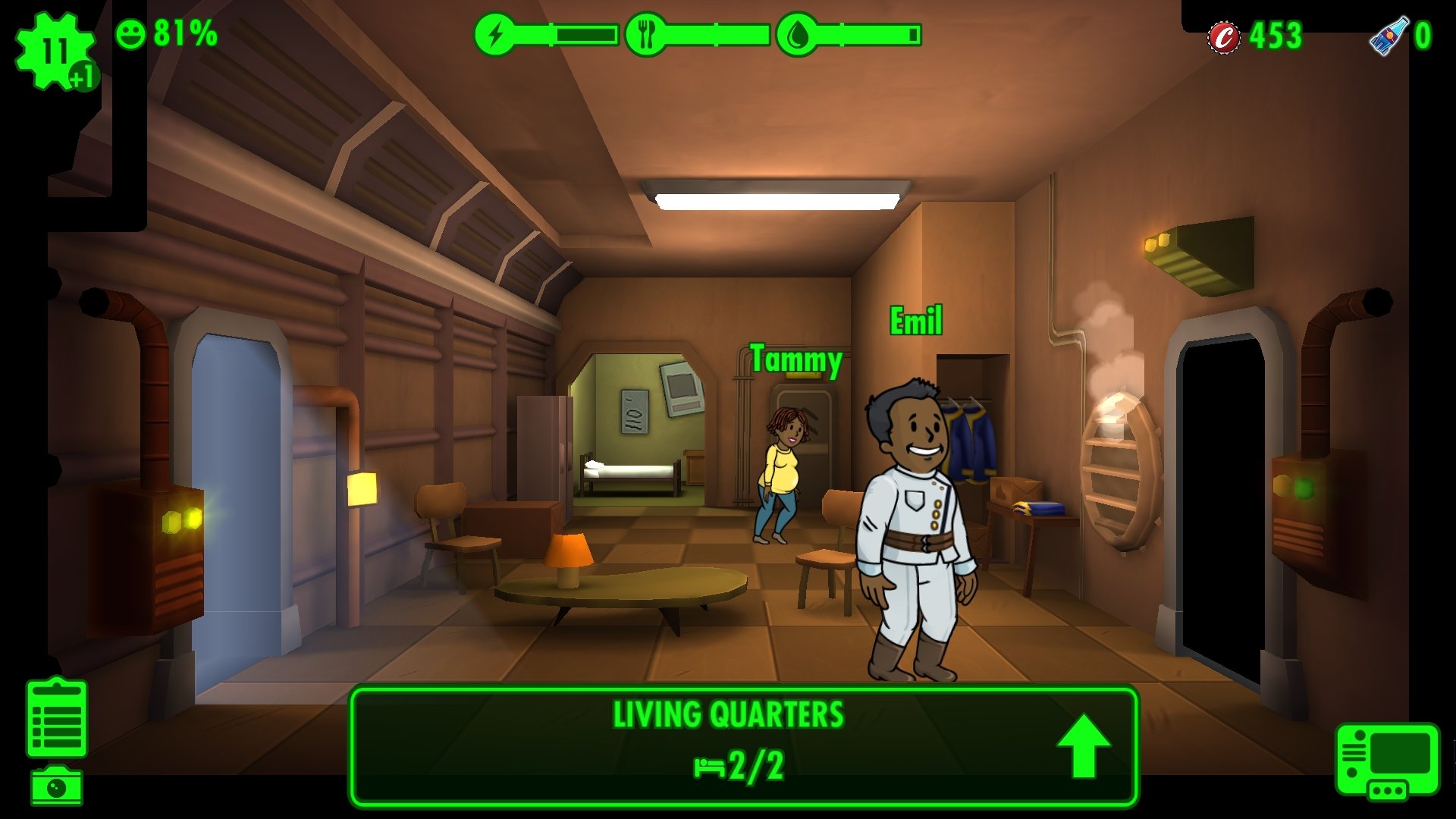 Also added is a crafting system that uses new “junk” items found while exploring or on quests to craft weapons and outfits in appropriate rooms. Including a number of crafting-exclusive items, the system brings Fallout Shelter closer in line with Fallout 4‘s stylistic legacy, as well as adding a way for players to fill out their collection of gear without relying on random drops in the wasteland or rare lunchboxes.

In a heartening bit of news, the microtransactions remain largely unobtrusive, limited to potentially buying the lunchboxes for random assortments of loot or stacks of Nuka-Cola Quantum, which can be used to skip the timers on quests and crafting. Quantums can be earned by finishing quests, as well, so the need to skip isn’t dependent entirely on one’s wallet. 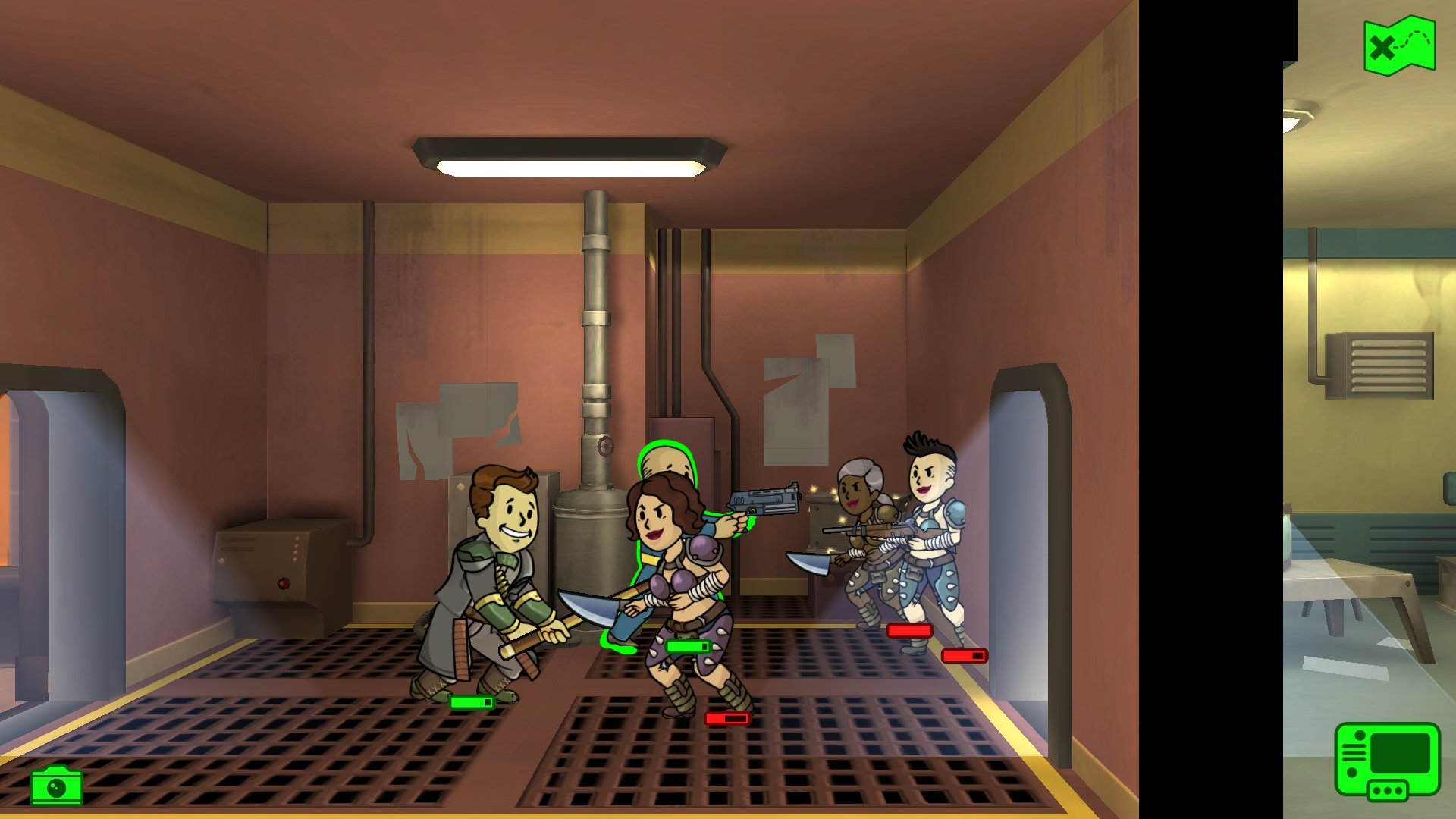 Y’see, almost all the game’s room unlocks are tied to your vault’s population of dwellers. That’s no problem, but things get weird because the only reliable way to grow the population is by locking male and female dwellers together in a room and having them get it on until babies are made. Radio rooms, some quests, and lunchboxes award new dwellers, but these are all governed by chance, making breeding the only practical solution for growing one’s vault at a reasonable pace.

Combine that with the tendency for pregnant female dwellers to quickly max out on their happiness while with child, and the result is a domino effect of decisions that tends to lead any Fallout Shelter player with a mind to optimize their play (a reasonable motivation) to constantly strive to keep all the women constantly impregnated, establishing rotating “stud farms” of male dwellers.

Even putting aside the political aspects of this inadvertent gender-relations dystopia, the game’s overemphasis on forced breeding has gameplay-relevant effects that affect even apolitical players, so long as they have a mind to play “efficiently”. Women end up at the bottom of the list for good weapons because they automatically run away and hide in a crisis and thus can’t use what they’re given if they’re pregnant. They also get left out of quests and exploring because they could otherwise be knocked-up back home.

I’d like to think that that’s all a clever part of the development team’s commentary on what kinds of societies can arise under the unique survival pressures of a Vault environment, or that it’s some kind of attempt to tailor Fallout Shelter to the sheer amorality of the whole Vault Experiment, but I’m not sure if creeping me out enough to quit playing was the real intention. 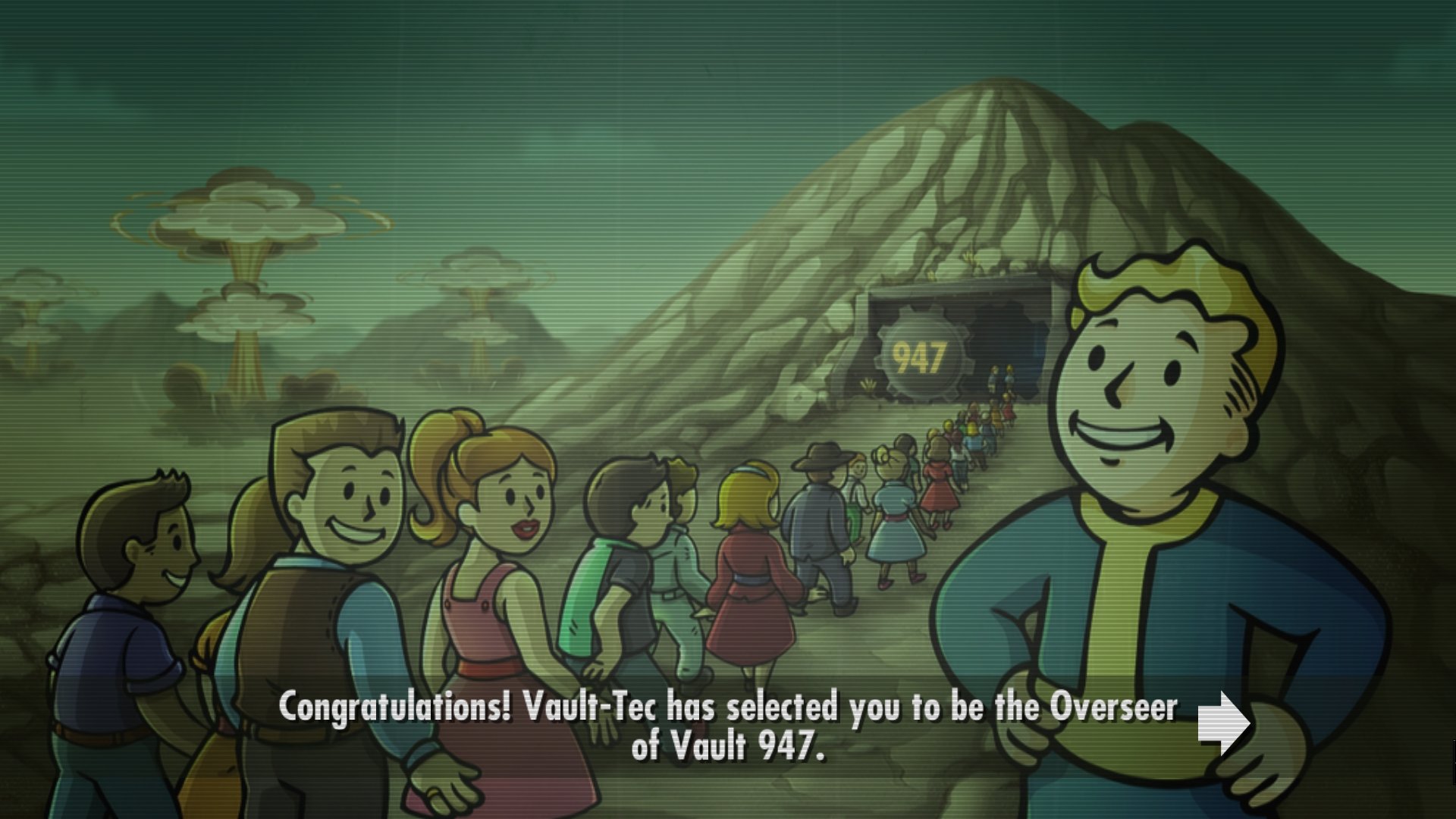 In any case, Fallout Shelter is a bit better than it used to be, and now you can play it on PC for free.