Games that are ported from phones and tablets to home computers are still rare but Deus Ex: The Fall seemed like the most likely candidate to benefit in the transition from touch screen to keyboard and mouse. In his review, Chris Carter mentioned that he felt the game would be best on something like the Vita or at least a system with tactile controls. After playing Deus Ex: The Fall on the iPhone, I have to agree.

Deus Ex: The Fall is now out on Steam for PC and whilst the game benefits from having mouse/keyboard and controller support, there’s still some issues that stop it from being a full Deus Ex experience. 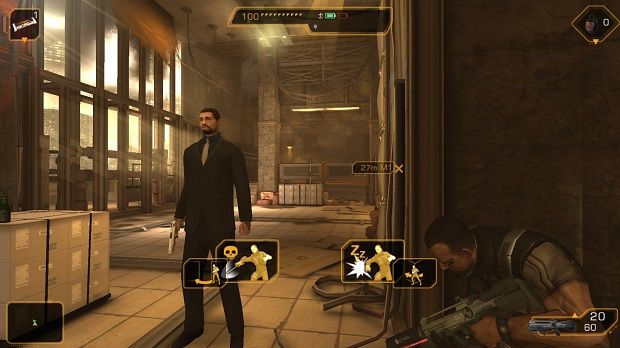 Whilst the move to a keyboard and mouse control scheme is most definitely welcome, there’s quite a few issues with the way these controls are implemented.

First of all, turn the mouse sensitivity way up as looking around will feel very sluggish. Secondly, a lot of the controls don’t map the same way as The Fall’s big brother, Human Revolution, at least if you’re playing with keyboard and mouse.

Part of what makes this confusing is that the touch screen prompts that showed up on-screen in the iOS version still pop up. Whilst these prompts would come up on the PC and console versions, they would be accompanied by a button prompt, like pressing X to go around cover or B to perform a takedown. Now you have to remember what keyboard prompt does what you want but playing with a controller does alleviate this to a degree. 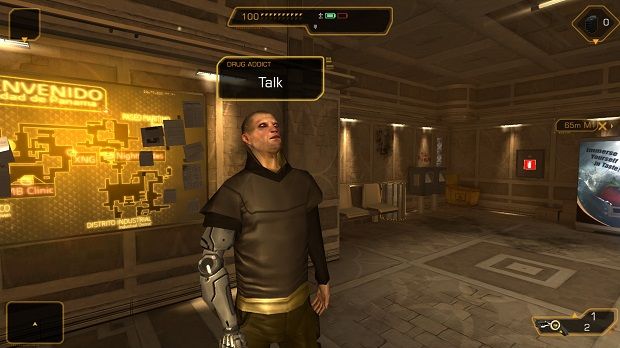 Graphically, The Fall looked good on the iPhone but was aided by the small screen size; on a large monitor, the game is a mixed bag. The models of the main characters like Ben Saxon, Anna Kelso, and the Tyrant mercenaries don’t look too bad, but other character models are simplistic and you’ll find the same three or four models in some of the city hub areas. The backgrounds look fine but you’ll see a lot of art and posters repeated from Human Revolution.

Deus Ex: The Fall isn’t bad game for the price but it’s definitely Deus Ex-lite; an experience that offers much of the same options as Human Revolution but just doesn’t have the same level of polish. The addition of controller and keyboard/mouse support is welcome but there’s still plenty of issues that make this a purchase for Deus Ex die-hards only.