The biggest job yet

Payday 2‘s heists are much shorter than the first game’s or broken up into multi-day sections that allow for some reprieve. I’ve played levels in the first Payday with equally unskilled, low-level friends for close to an hour, holding out against all odds before finally failing, our efforts for naught.

If you missed that slow mounting tension as ammo supplies dwindle and the onslaught of hundreds of policemen continues, Payday 2‘s The Big Bank DLC is for you. 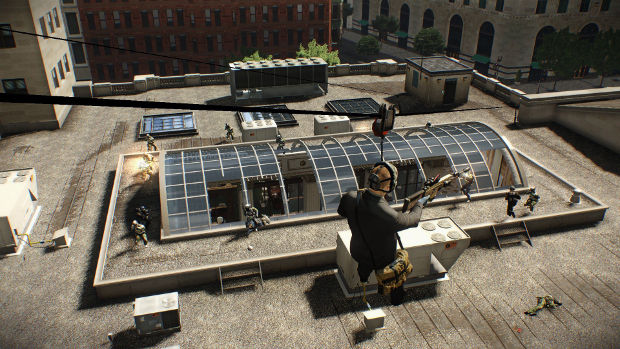 The Benevolent Bank is a big job, given to you by The Dentist, as played by Breaking Bad‘s Giancarlo Esposito. With The Dentist comes the pre-planning tab, which lets you set up certain elements of the lengthier heist to your liking. Provided you get everyone in it and attentive.

Even if you don’t draw up recommended routes on the blueprints like you’re John Madden (or if your teammates couldn’t be arsed to pay attention), the pre-planning stage is still useful. Now you can choose drop points for assets like ammo and doctor bags. And these placements don’t have one ideal spot that you’re wasting your time setting over and over because in the pre-planning you can also change your mode of entry into the giant vault (thermite or The Beast drill) and means of escape (I like driving a bus through the wall).

These choices require calling in favors, of which the entire team is allotted ten, and spending some cash. If you’re a penny pincher, you can stick with default escape and breach plans. The default way into the vault, unless you’re good enough to stealth it, is The Beast, a multi-part drill hidden in a giant pink piggy bank that needs to be dropped from a crane and into the bank lobby.

I’ve still not been able to successfully stealth the Big Bank, even playing on teams of much more seasoned players. Still, you should try for stealth as long as possible, just because of the length of the heist. There’s a complicated door to get through even before you get to the vault, and a few variables that change arbitrarily, as is typical with Payday missions (server room location, needing to access a maintenance room on the roof to get through the first door).

Then there’s getting into and holding out in the big vault long enough to steal everything. The weird thing about playing Payday 2 at this point is that unless you’re playing with friends, or an avid player yourself, you’re probably going to end up on skilled teams with various upgrades who will handle the bulk of the duties required to get through a heist. I found myself a hired gun and a pack mule typically (for securing all the loot).

Yet even if you’re not stealing key cards, hacking servers, or quickly unlocking cages, you’re still necessary, especially on higher difficulties. You’ll occasionally even find yourself in position of savior, rescuing downed allies, or you can at least drop an ammo bag in the vault. Meanwhile, you’re learning the ins and outs of the levle and sharing that accumulated knowledge with whomever you play with next.

The other additions with the DLC — masks and guns and whatnot — are welcomed, but the main draw here is the new heist, which those who preferred the original game will appreciate. There is more tension to longer jobs. As it goes on, more is at stake. Not just your in-game money, but your real world time, which I value even more.