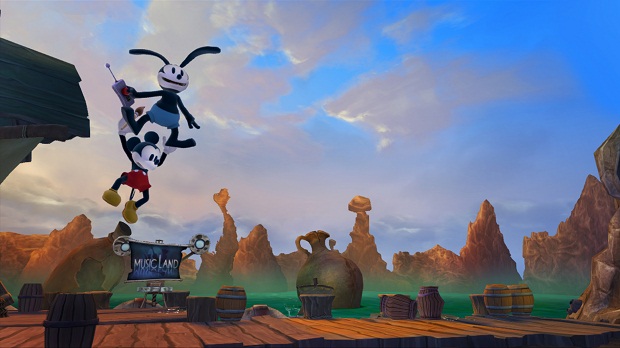 That was my first reaction when Warren Spector compared his upcoming Epic Mickey 2 to his legendary masterpiece Deus Ex in a PAX sit down I had with him earlier today. Actually, it was more of a huh? But then the outspoken, talented designer started explaining himself and I started to get what he was saying. Well, I sort of got what he was saying.

Warren explained that in Deus Ex, players play the way they want and the game changes based on your choices. If you choose to play a certain way, the game adjusts to that style. Choice is important. In Epic Mickey 2, you can play the entire game with paint and not thinner (meaning befriending enemies rather than destroy them), just as you can complete Deus Ex without ever using a gun.

He went on to talk about how player choice and actions are the driving force of Epic Mickey 2, just as they were in Deus Ex. While admitting the stakes may not be as high in Epic Mickey 2, he believes the player is making similar choices on how to proceed as they did in Deus Ex.

Aesthetic- and gameplay-wise, the two games could not be more different, but Warren insists on empowering the player in Epic Mickey 2 just like in Deus Ex. But this time it is with a paintbrush and not a gun.

A bold comparison, sure, but I have to admire and respect Warren’s love of videogames and player interaction.