One of the main things that Irrational Games has really pushed in its marketing for BioShock Infinite is the relationship between the player-controlled character Booker DeWitt and the young woman Elizabeth that he’s tasked with retrieving from the floating city Columbia. At Saturday’s Irrational Games Panel, actresses Courtnee Draper and Heather Gordon talked about how they helped sculpt Elizabeth’s personality with lead writer Ken Levine.

“This process was really great because Troy, who plays Booker DeWitt, and Ken — we would all work together. We would just sit in a room and have this really great collaborative effort which was unlike any other project I’ve worked on. I’ve never had that to this extent, so the inspiration was really just everytime I came out to Boston we would sit and talk about what kind of character we wanted her to be and what relationship we hoped you as the player would experience with her. It was almost on a piecemeal basis and all kind of finding her together.” 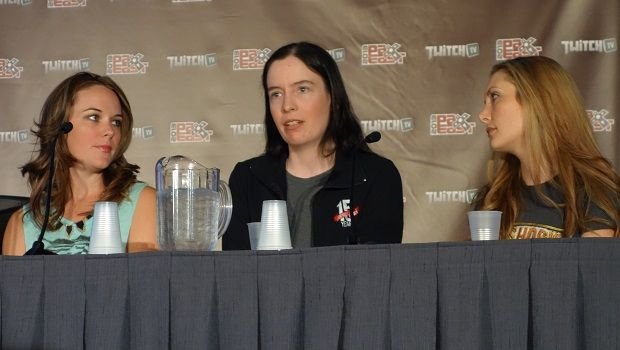 Courtnee then recalled a particular recording session that involved Elizabeth being upset after Troy berates her for still being unable to control her powers. We were shown a short video in which Ken briefs the scene and Courtnee suggest that Troy (as Booker) just berates her under Ken’s direction, which he does and you can really start to see her get more upset before finally delivering the line. The video ends on a funny note as once the line is complete, Courntee regains her composure and suggests they try the process again.

The real challenge came with combining Courtnee’s vocal performance with Heather Gordon’s motion capture performance. Heather recalled her theatre background as being especially useful: “I had to physical have it exude through me as it happened to Courtnee. So I had to emotionally get myself to the place that she got to at the same time. It had to be timed perfectly.”

The attendees at the panel were shown some rough footage of Heather in the full mo-cap suit performing a range of scenes with plenty of gusto. “After getting into it, I really just started to connect deeply with what Courtnee did and she became a person.”