The PAX East booth for Tiny Brains is what lured my three friends and I near. Blue beakers filled with brains, the exhibitors wearing lab coats, and the promise of cooperative play was too much to resist. I am super happy that we stayed, because Tiny Brains was an absolute blast. It’s a four-player cooperative puzzle game with some light action elements. Light as in “only one attack button” light.

The puzzle element really takes the focus in Tiny Brain and it’s incredibly satisfying. Each player has a unique power, either force push, force pull, swap, or placing a barrier. While none of those powers seem super interesting on their own, the level and puzzle design force the players to use them in tandem in some pretty awesome ways.

The game’s setup has four animals trying to escape a laboratory after being experimented on. These experiments are what gave them their special powers and now the animals plan to use them to their advantage. The art style has a cartoony vibe and looks great, especially when juxtaposed with the devious puzzle design. 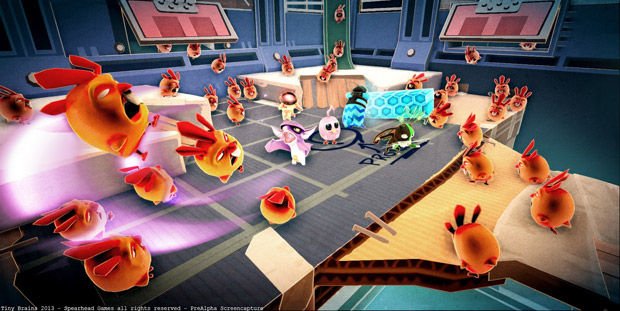 Puzzles require getting a “key,” usually a ball or a battery, into a specific slot on the level in order to advance. They start off simple enough, but quickly require more than one power to be used at once in order to solve the puzzle. The best example I can give is the puzzle we got to play after the tutorial level. The battery that we needed to be on our platform was around the corner and there was a large gap in the middle.

Using these powers in tandem was one of the most satisfying experiences possible. There were other elements to the game as well, as one part of a level had us guiding a ball through some precarious locations. If there was a gap along the wall, our barrier guy filled it in. If it was about to fall off, the puller was quick to react.

There were also enemies to fight, either by using powers or smashing the attack button. Using powers to clear away enemies is way better, which became quickly evident once the swapper jumped off the edge and swapped places with an enemy only to watch them fall to their doom. Tiny Brains will hopefully be out this year on all major platforms, but nothing is set in stone.