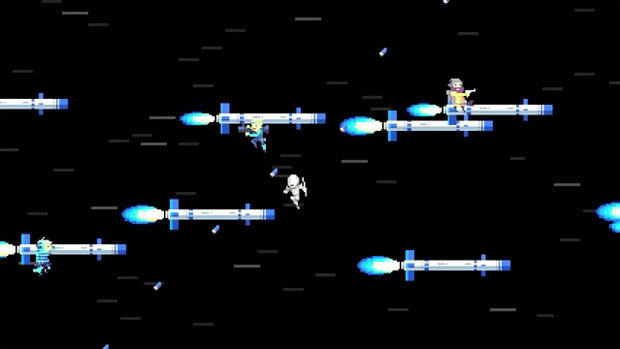 If you were like me when you saw the debut trailer for Super Time Force, you were probably asking yourself, “What the f*ck is going on here?!” Well I finally got my hands-on with the game at PAX East and can tell you it’s like if Contra and the movie Groundhog Day had a really weird, awesome baby.

You’re part of a time traveling force that has to go to the past to fix errors like a crazy alien invasion. You pick your elite character at the start of the level and go through to kill everything, Contra style. Once you die the game will “rewind” time and pit you back at the start of the level. The twist is that your previous run-throughs will still appear on the stage, repeating everything you did up until the point you died. It’s kind of like ghost data from a racing game.

You have a total of only 30 lives, but you can save a past version yourself, granting you that life back. This also allows you to restart from the last point you died, rather than starting all the way from the beginning again.

There’s going to be several playable characters, but at the start of Super Time Force you’ll only have access to a machine gunner, sniper and shield based character. Each has a standard attack, and holding down the attack button will unleash their special move. There’s a time meter at the top left of the screen that’s constantly depleting, eventually killing you. The only way to sustain it is to kill everything in sight.

The action is pretty fast paced and you will die a lot. You know what, though? It’s fun to die in Super Time Force. Dying just ends up benefiting you, as you’ll have “help” from your past versions essentially.

Super Time Force is slated for sometime this year on Xbox Live Arcade. Developer Capybara is looking into incorporating some sort of co-op mode, but only “if it feels right.” If you’re at PAX this weekend you seriously owe it to yourself to try out Super Time Force.