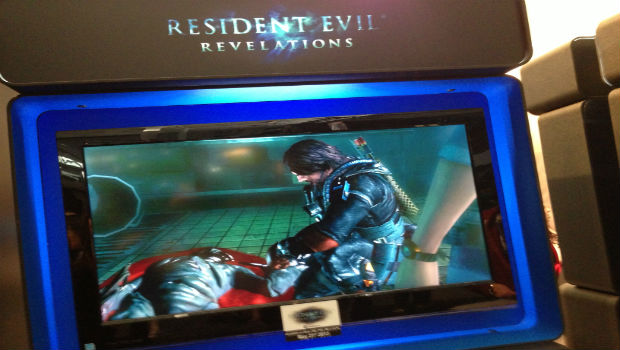 Play this on a big TV with headphones!

I had a chance to go hands-on with Capcom’s Resident Evil: Revelations port on the Xbox 360, and I came back impressed. The demo was on a fairly nice screen with a set of headphones, with really helped add to the atmosphere of the game and enhance the experience. Overall, it sounds better than its 3DS counterpart, and the jump to HD is practically seamless, as it looks like it was always built for consoles.

As you can see in this photo, there’s two control schemes, to accommodation for people who enjoy both the new and old style of play. They both work great, and with more screen real estate, it’s even easier to see what’s going on, and scan targets with the Metroid Prime style Genesis tool.

When Revelations actually came out, I was left a little disappointed, despite my overall positive takeway. I felt like the story was lacking, and there weren’t enough tight-knit areas — plus the supporting cast was pretty terrible.

All of that won’t change with a console port, but Capcom really nailed the atmosphere in the shift to consoles. Plus, with the enhanced Raid Mode and new content, it’s easily worth taking the plunge again, even if there aren’t any real “revelations” to be had. It’s not like the portable version can’t nail atmospheric tones — it absolutely can — I just enjoyed this version more on a personal level.